Although the year is only half over, three new novels targeted towards Muslim teenagers and young adults are already making news. A combination of dramatic plots and complex characters with real life scenarios of the average Muslim household results in must-read stories, for all ages and backgrounds. 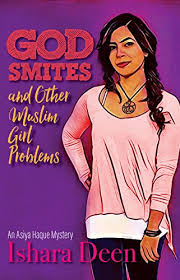 God Smites and Other Muslim Girl Problems is a Nancy Drew style mystery with loads of hilarity and even some romance on the side. Canadian author, Ishara Deen, has penned a novel that is part mystery and part social commentary. The main character, Asiya Haque, is a typical Muslim American teenager struggling to hide a crush on a white boy, chaffing under the rules set by her ultra-strict Bangladeshi American mother, and annoyed by the sanctimonious men and women of her local mosque. Everything fun seems to be haram- so when Asiya goes on a walk with Michael her friend/crush and finds a dead body, she knows she’s in for a rough ride. Now it’s up to Asiya to prove that Michael is not the killer, while everybody at her mosque is eyeing her sideways for not being the good Muslim girl they expect her to be. While the mystery in this novel is intriguing and well-plotted, the real gems are the genuine characterization of the busybodies at the mosque, the stressed-out Desi mother and the constant contradiction of American versus Muslim identity, that first generation teenage Muslims typically feel. More than anything else, the depiction of the mosque community along with the unofficial “morality police” in Asiya’s city is diverse, vibrant and complex- just like in reality. 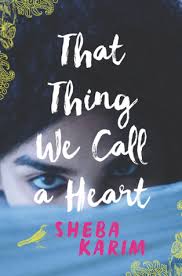 That Thing We Call a Heart is a straight-up romance novel with a side order of Muslim complications. Nashville based author, Sheba Karim is a master at reflecting the diversity of Muslim practice, as evidenced by her previous book Skunk Girl. In That Thing We Call a Heart, main character Shabnam is a typical Muslim teen with a problem: her best friend Farah has started wearing the hijab without consulting her and this has driven a huge rift between the two. When Shabnam begins secretly dating a cool dude, Jamie, Farah makes her disapproval well known. While this novel may have been your average Muslim teen romance (not that there are many of those) its saving grace is the glorious rejection of stereotypes, Muslims even have about themselves. Shabnam is depicted as a good girl, who comes from a non-practicing Muslim family, that is more Western than anything else. She isn’t filled with the first generation immigrant angst we expect from our heroines, but her sudden interest in Urdu ghazals drags her closer to her culture. On the other hand, Farah is a punk girl with blue streaks in her hair and blue lipstick, her hijab becomes a part of her personality in a way that is refreshing and inviting. Every word of this novel offers a unique light on Muslim families, while removing the misconception that all Muslims practice their faith the same way. Plus, the romance in this novel is pretty hot. 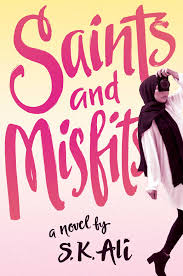 Saints and Misfits is a hard-hitting look at the problems we have in our community. Canadian Muslim author, S.K. Ali, has bravely spoken out about a taboo topic: sexual assault. The main character Janna is already reeling from her parent’s divorce and her father’s new (white) family, when she is sexually assaulted by a golden boy of the Muslim community- a hafiz Quran who is beloved by all, including her family. She is scared, worried and lonely. Who will believe the word of a misfit over the prim and proper, upstanding Muslims around her? As Jannah’s world unravels, the psychological pain of the assault and her assaulter’s continued advances make her unable to work, study or sleep. During this terrible time, she finds help from unexpected quarters, including a full burqa-wearing girl who’s a disguised YouTube star. From this support, she finally gathers the courage to expose the dirty secrets of her Muslim community. This novel is a painfully honest look at our Muslim communities and the work that needs to be done to improve our internal issues. It also offers a very diverse portrait of the American Muslim community and showcases Muslims from a wide variety of ethnic backgrounds.

Sundance Winner–Compilation of Racist Stereotypes Against Arabs in Hollywood

Advice Column: Is Eating Lettuce Pointless?
By Noor H. Salem blackbeanbrownies.wordpress.com Question: Everyone says that lettuce is not worth eating because it has no benefits. I…

Novel, The Scent of Jasmine is a Snapshot of Past Arab World
Scroll to top