A factory manager was lynched to death and then set on fire on accusations of blasphemy by his employees and an angry mob of hundreds this Friday. This took place in public while others quietly watched.

A police official in Sialkot, who spoke on condition of anonymity because of the sensitivity of the case, said investigators believed the attackers had accused the manager of blasphemy for tearing down a poster with Islamic holy verses.

The incident began when allegedly Diyawadana, a Sri Lankan, who had been the manager of the factory for seven years, had taken down a poster carrying words from the Qur’an. By the morning, a crowd began to gather at the factory gates, and by the afternoon, they had charged into the factory and seized Diyawadana. Many claim it was because he was a strict boss, and they were unhappy with him, but the official reason was blasphemy for the attack.

The police assistant commissioner Mr. Mohammed Murtaza said, “Due to the renovation of the factory building, some posters were taken off from the wall. They may have desecrated posters bearing the name of Prophet Muhammad (PBUH). Maybe the manager was lynched because of that.”

He added: “Unfortunately, I can’t affirm or deny anything at the moment. The alibi used for murder is blasphemy, but the cause of murder appears personal and targeted. The issue is being investigated.”

The victim, identified as Mr. Priyantha Kumara Diyawadana, worked as a production manager at a private factory on Wazirabad Road in Sialkot, a city in the Province of Punjab. The employees also vandalized the factory premises and blocked traffic. Authorities have arrested “more than 100 people” and claim to have apprehended the main suspect behind the incident.

Pakistan Prime Minister called this incident “a day of shame for Pakistan” in a tweet. He wrote in his tweet, “The horrific vigilante attack on a factory in Sialkot & the burning alive of Sri Lankan manager is a day of shame for Pakistan. I am overseeing the investigations & let there be no mistake all those responsible will be punished with full severity of the law. Arrests are in progress.”

The President of Pakistan, Mr. Arif Alvi, praised the “prompt action” taken by the Prime Minister and the government. He called the incident “definitely very sad and shameful, and not religious in any way whatsoever.”

The Inter-Services Public Relations issued a statement on behalf of Chief of Army Staff General Qamar Javed Bajwa, which termed the act a “cold-blooded murder.” He also added that such extrajudicial vigilantism could not be condoned at any cost”.

Jamaat-e-Islami chief Mr. Siraj-ul-Haq condemned the Sialkot lynching in strong words, saying it was an insult to Islam and humanity.

“The cold-blooded murder of the Sri Lankan factory manager has brought shame to Pakistan,” he lamented. “A transparent inquiry should be held into the incident, and all those found guilty should be handed exemplary punishments.”

Mr. Malik Naseem Awan, a resident, and lawyer in Sialkot, a district in central Punjab province, told AFP news, “I can’t tell you how embarrassed I am. It would have been different if someone had done this individually but the crowd present there was watching it silently, and no one tried to rescue him”.

Pakistan, an Islamic state, has stringent laws against blasphemy, which carry the death sentence. These laws are often used against religious minorities, and those accused are sometimes lynched before they are proven guilty in court. There is a huge  culture of fear around blasphemy cases which often leads the  judges  to find the accused guilty whether any actual crime was committed or not.

This time however, dozens of people have been arrested who were involved in the crimes against the Sri Lankan factory manager. Several gruesome video clips shared on social media showed a mob beating the victim while chanting  against blasphemy on Friday. Other clips showed his body on fire, as well as the wreckage of what was said to be his car. The criminals made no attempts to hide their identities and some even took pictures in front of the burning corpse.

Protests against the lynching were held over the weekend in some of the big cities in Pakistan such as Karachi. The protesters demanded that the government take a look at the country’s blasphemy laws, which are being misused for personal vendettas.

“He was killed on the false charges of blasphemy,” said human rights activist, Ms. Mehnaz Rehman. “The people who killed him were people who didn’t want to work and he just asked them to work honestly so they killed him on the pretext of blasphemy. This law is being abused by such people,”she continued.

This is not the first case of blasphemy where the accused was actually the victim. These cases are really hard to prove, it usually is one person’s word against another’s. When it comes to matters of faith people tend to be easily wound. The public and the courts have been using this to their advantage for decades. Sri Lankan Authorities have been demanding justice.

Prime Minister Khan said in another tweet, “Spoke to Sri Lankan President Gotabaya Rajapaksa today in UAE to convey our nation’s anger & shame to people of Sri Lanka at vigilante killing of Priyantha Diyawadana in Sialkot. I informed him 100+ ppl arrested & assured him they would be prosecuted with full severity of the law.” 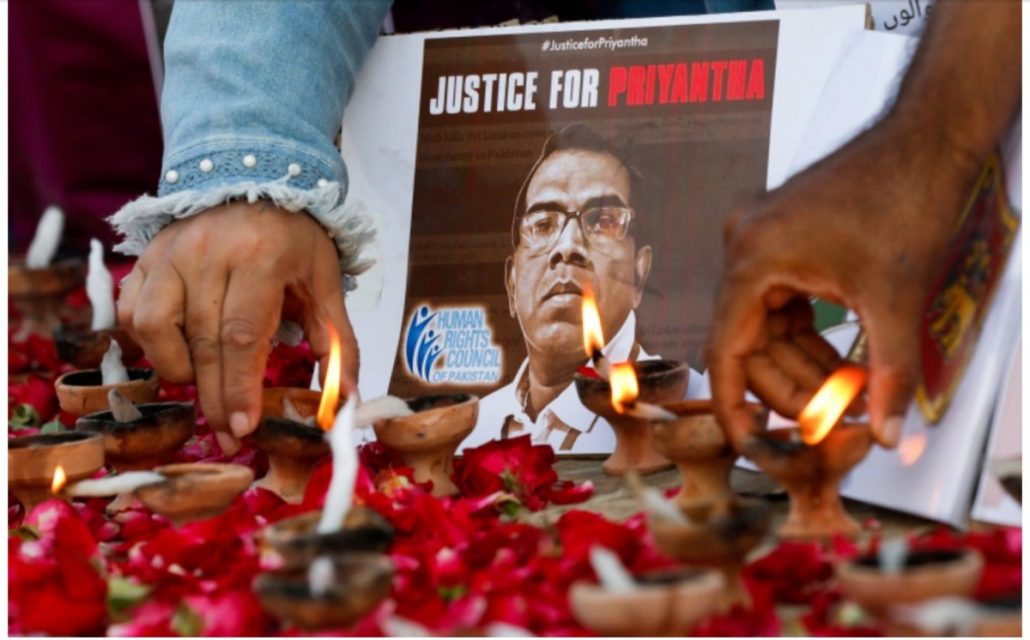 Two Years After My Husband’s Arrest, My 4 Kids And I Still Await Justice To Prevail

New Mexico mosque set on fire in the latest incident of Islamophobia in U.S...
Scroll to top