When Indian Prime Minister Narendra Modi and US President Donald Trump took the stage together at last year’s “Howdy, Modi” event in Houston, Texas, a rising young star in the Republican Party filmed from a seat near the front.

It was “incredible being with 50,000 fellow Indian Americans in Houston,” wrote Ohio State Representative Niraj Antani, who was one of the few Indian-American elected officials to join the event. Like Modi’s previous two mega-receptions in the US — in California in 2015 and in New York in 2014 — this was one was vociferously protested. While the stadium was packed with cheering supporters of the controversial prime minister, up to 15,000protested outside.

Only a week before the 22 September 2019 event, over 60 lawmakers were predicted to attend, but less than half of that ultimately showed. Out of the five Indian-Americans in US Congress, only Congressman Raja Krishnamoorthi attended, warmly shaking hands with Modi on stage as the two met for the third time. Perhaps the only other federal or state level Indian-American politician present was Michigan State Representative Padma Kuppa, who moderated a post-reception panel.

Protestors outside were particularly galvanized by the Modi regime’s draconian lockdown in Jammu and Kashmir, the only Muslim-majority region in Hindu-majority India, just a month earlier. On 5 August, the government scrapped the constitution’s Article 370, which had granted the region semi-autonomy for the previous 74 years as the condition for its accession to India. The action was accompanied by a mass arrest of the entire civil society — political, religious, even business leaders — and severing of all communications. Before that, however, Modi was already a deeply polarizing figure. From 2005 until he was elected as prime minister in 2014, he was banned from entering the US due to his alleged involvement in an anti-Muslim pogrom while he was head of the Indian state of Gujarat.

Thus, most Indian-American elected officials opted not to attend “Howdy, Modi.” Yet Antani was one of the few exceptions. The thread connecting the young Republican to Democratic politicians like Kuppa and Krishnamoorthi was a shared donor base that transcended party lines.

Modi belongs to the Bharatiya Janata Party (BJP), a Hindu nationalist party birthed by a paramilitary called Rashtriya Swayamsevak Sangh (RSS), which has a US wing known as Hindu Swayamsevak Sangh (HSS). Rishi Bhutada, the official spokesperson for “Howdy, Modi” and son (and employee) of HSS-US Vice-President Ramesh Bhutada, has donated $1,000 to Antani’s campaigns. Subhash Gupta, President of HSS-Houston, has donated $500. Vijay Pallod, an HSS activist and former governing councillor of Vishwa Hindu Parishad of America (VHPA) — the US wing of India’s VHP, itself the religious wing of the RSS — has donated $200. All three, who live in Texas, are also donors to Krishnamoorthi (in Illinois) and Kuppa (in Michigan).

Since the Houston event, Antani — who is now running for Ohio State Senate after three terms in the State House of Representatives — has been outspoken in support of Modi’s agenda.

In August 2020, Antani praised Trump for having “stood with Prime Minister Modi in the United States” and applauded him for “neutrality when it comes to [the Citizenship Amendment Act] and the abrogation of 370.” Human Rights Watch had warned that CAA — legislation passed in India in December 2019 — “discriminates on religious grounds in violation of international law” and the US Commission on International Religious Freedom had explained that the law was “setting a legal criterion for citizenship based on religion.” Congressman Khanna spoke against CAA, saying, “I don’t think India should be discriminating who they’re going to give expedited citizenship based on faith.” Amnesty International, denouncing the lockdown in Kashmir, had warned that “a complete clampdown on civil liberties is only likely to increase tensions, alienate the people and increase the risk of further human rights violations. Congresswoman Pramila Jayapal introduced a resolution calling on India to “end the restrictions on communications and mass detentions in Jammu and Kashmir as swiftly as possible.”

Passage of CAA sparked nationwide protests of millions in India, which were echoed in protests by hundreds in the US — where many had already been protesting the annexation of Kashmir — and yet Antani (an Ohio state legislator) decided it was expedient to stand with Modi (a pogrom-tainted foreign leader).

“Democrats are taking these anti-India positions regarding CAA and the abrogation of 370,” claimed Antani in August. In September, he added, “The Democratic position on abrogation of Article 370 and the CAA has caused a swathe of Indian-Americans to be more supportive of Republicans.”

Perhaps that is what motivated someone like Sudhir Shah — a Florida-based national councillor of the Overseas Friends of the BJP, which recently registered a foreign agent in the US — to donate $250 to the Ohio politician.

Antani’s support for some of the Modi regime’s most contentious policies may be what makes him a welcome presence at Hindu nationalist events in the US. In November 2019, he was a speaker — alongside Kuppa — at a conference in Boston hosted by the VHPA. “Why any Indian or Hindu American would ever support an elected official who has spoken against the revocation of 370 is beyond me,” he said at the event.

The VHPA, notably, is so extreme that the Council for a Parliament of the World’s Religions refused to co-sponsor an event with it due, in part, to the group’s links to its mother organization, the VHP. Labeled by the CIA in 2018 as a “religious militant organization,” the VHP has been linked to an anti-Christian pogrom in 2008, the anti-Muslim pogrom in Gujarat in 2002, and a number of other incidents of violence against Indian religious minorities. As a subsidiary of the RSS, the VHP shares its parent organization’s goal of turning India into a “Hindu nation,” which has been articulated by — among others — VHP Joint General Secretary Swami Vigyananand in 2014, who declared: “We shall set up in Bharat [India] a Hindu State, which will be our nation-state.”

Vigyananand is the founder of the World Hindu Congress, a conference which held its second iteration in Chicago in 2018. The event, like “Howdy, Modi,” was deeply controversial. As it featured a keynote speech by RSS Chief Mohan Bhagwat, it was protested both inside and outside. The venue’s main conference room was, for the conference, renamed “Ashok Singhal Hall” in memory of the long-serving VHP chief who died in 2015. Singhal was infamous for having described the 2002 Gujarat pogrom as a “successful experiment” which would be “repeated” all over the country.

Among the handful of Indian-American politicians who did attend — as in the case of “Howdy, Modi” — were Congressman Raja Krishnamoorthi and Ohio State Representative Niraj Antani.

Both were keenly aware of the fact that the event was controversial. “Some of us, including myself, were targeted to withdraw from this conference,” said Antani at the event. “Unfortunately, some did not show up.”

In fact, among those who did not show up was Tulsi Gabbard — despite her own strong associations with the RSS-BJP both in US and in India since the dawn of her congressional career — backed out of the conference, declaring it a “partisan Indian political event.”

Money talks, however. While Antani has received generous donations from Hindu nationalist activists in Texas, no one has been more financially supportive of his campaigns than Shekar Reddy and Mihir Meghani. Neither of whom, incidentally, live in Ohio.

Reddy has been (and possibly still is) on the advisory board of the Florida chapter of Ekal Vidyalaya, a “single-teacher school” project of the VHP in India which, reportedly, selects teachers “only if they subscribe to the RSS way of thought.” He is also a long-time organizer for the VHPA. Meghani, a former governing councillor of VHPA who is also described by sociologist Prema Kurien as “an activist in the VHPA and HSS,” has a relationship with the RSS tracing back to the 1990s when workers in the paramilitary, according to his account, helped arrange a clinical rotation for him in India as he was completing medical school. Between the two of them — and their wives — they have donated over $50,000 to Gabbard.

Reddy and Meghani are also Antani’s largest donors. Since 2018, from Florida, Reddy has donated $5,000 to the Ohio politician. Meghani, from California, has donated $17,000.

In fact, over the past three years, Niraj Antani has received approximately $26,000 in campaign financing from nine out-of-state donors who are distinctly identifiable as either leaders in US affiliates of the RSS or pro-Modi activists or both.

Antani first entered the Ohio House of Representatives in 2014 when he was 23. He’s now seeking higher office. His ambition to use his election to one office to leapfrog into a more powerful one is obvious — and, of course, typical of a politician. What’s not so typical of a state legislator is to be heavily funded by out-of-state donors, let alone donors affiliated with groups that support a religious nationalist agenda in a foreign country.

As they go to the polls, Ohio voters may want to consider why — in the face of protests against rapidly increasing human rights violations in India — Niraj Antani proudly joined “Howdy, Modi” or why he unashamedly spoke at two similarly controversial conferences organized by American affiliates of a supremacist group that is accused of massacring Christians and Muslims as it seeks to turn India into a theocratic Hindu nation. 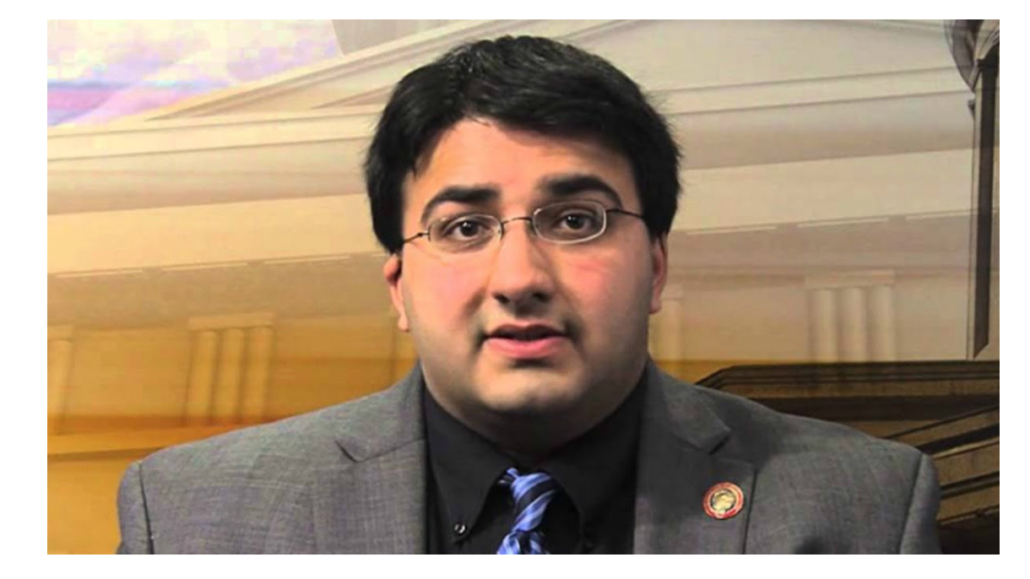 Trump suggests fallen soldiers’ families are to blame for his contracting...
Scroll to top