Media attention toward the devasting impact climate change has had on Pakistan has become scarce. Because the issue doesn’t impact Western countries or media right now, it is being given little to no importance.

But even though Pakistan is bearing the extremes of climate change, that doesn’t mean North America and other nations of the Western world are immune. Already this hurricane season, Puerto Rico has seen devastating natural disasters, as has Florida.

Pakistan’s Prime Minister Shehbaz Sharif has warned that climate change will not discriminate against other countries as it engulfs up to one-third of Pakistan underwater and puts millions at risk of water-borne diseases.

At a United Nations General Assembly last week, Sharif urged the international community to come together and “act now” before it’s too late, CNN reported.

“One thing is very clear, what happened in Pakistan will not stay in Pakistan,” Sharif told world leaders.

“For 40 days and 40 nights, a biblical flood poured down, smashing centuries of weather records, challenging everything we knew about disaster and how to manage it,” he added.

Since the monsoon season began in mid-June, extreme rainfall has led to family homes, city infrastructure, and land being destroyed. Without the ability to reach those in need, thousands continue to suffer from a lack of food, and medicine, not to mention the spread of disease.

But that’s not all: Glacier melt has triggered additional flooding, bringing the death toll up to more than 1,600 people, with thousands of others injured.

Of the 1,606 deaths recorded so far, 579 are children, the country’s National Disaster Management Authority said.

According to CNN, Pakistan authorities have warned it could take up to six months for the flood waters to recede in the country’s hardest-hit areas—which are also the poorest.

“The undeniable and inconvenient truth is that this calamity has not been triggered by anything we have done,” he said.

Nearly 33 million people have been displaced by this climate crisis in the country, despite Pakistan only being responsible for less than 1% of the world’s planet-warming gases, according to European Union data.

Even though Pakistan contributes little to nothing to the world’s historic emissions responsible for climate change, it remains the eighth-most vulnerable nation to the climate crisis, according to the Global Climate Risk Index. At this time, about half a million survivors are still living in tents and makeshift shelters.

Children are the most impacted, with 3.4 million children in need of “immediate, lifesaving support.” According to UNICEF, the massive flooding has left children vulnerable to contracting water-borne diseases, including diarrhea, dysentery, dengue fever, and malaria.

Doctors at the Mother and Child Healthcare Hospital in Sindh—the province most impacted by the floods—told CNN that more than 10 children die every day at the hospital alone, all from water-related ailments stemming from the floods.

With flooding damages, all pathways to transportation villagers in Sidh have been completely cut off from aid. Villagers who have lost their homes from the flooding are even more at risk of being stranded on the road without food or clean water to drink.

“Many children are not even reaching hospitals because the medical facilities they could access are either underwater or just not accessible,” said Aadarsh Leghari, UNICEF’s Communications Officer in Pakistan.

“The children we are seeing now were already sick before they were displaced,” said Faram Gohar Lashari, a pediatrician at Dadu central hospital. “Now, this suffering will only increase.”

Lashari added: “Nearly all these children are malnourished, and that makes them more vulnerable to other illnesses.”

The situation is beyond heartbreaking, with stories that are too difficult to grasp or imagine.

“All this has happened because of the rains,” said Mai Sabagi, the grandmother of a five-year-old girl who had just died from cholera, according to CNN. “We lost our clothes … everything. Our house has been damaged. We have not been given any relief. Poor people cannot afford treatment.”

Appeals are being made for Pakistan’s debt to other countries to be forgiven. Officials are noting that the crisis has taken the country back years in development.

“The country is broken,” Sherry Rehman, Pakistan’s minister for climate change and a former ambassador to Washington, told Nikkei Asia in an interview.

“The widespread destruction of the country’s road, bridge, and rail networks has taken us back half a century, so access is by air or naval boats. The crisis is multidimensional and complex now. The health emergency caused by destroyed clinics, miles of swampy water, and water-borne diseases is potentially deadly.”

She added: “The upcoming medium-term food crisis, the economic crunch, these will be the wages of the climate crisis.”

The reality is communities that have already been struggling are the ones who are being most impacted by climate change and climate disasters. Pakistan is facing a global disaster, and countries, especially those that are wealthy like the U.S., need to step up. 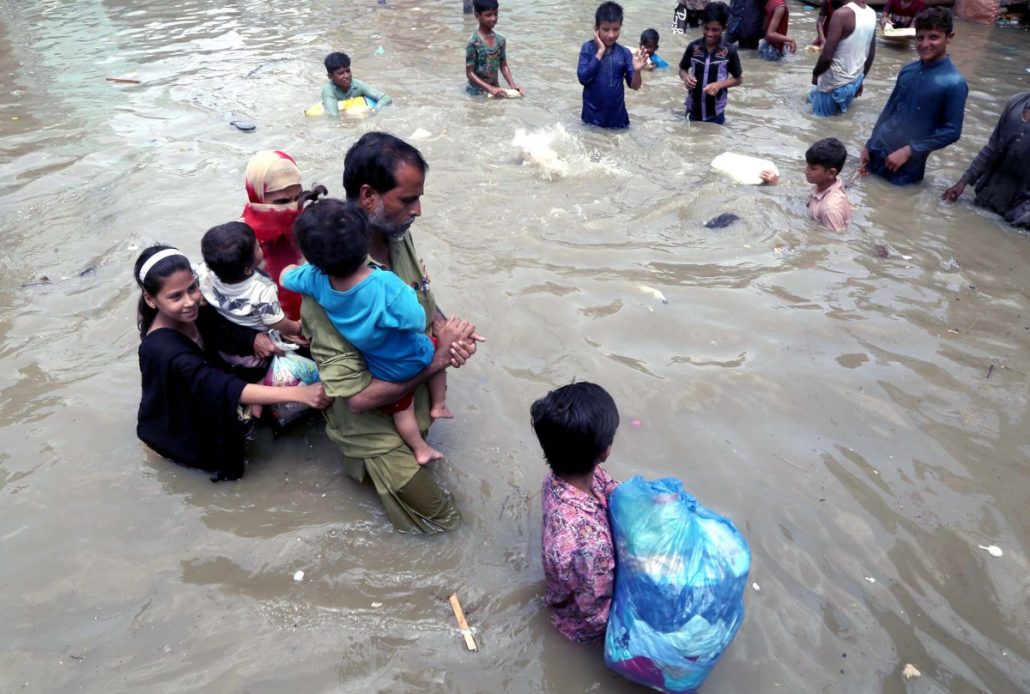 Mosque might serve as a temporary shelter for the homeless

© 2020 MuslimObserver.com, All Rights Reserved
Op Ed: Is Picking Out Muslim Americans at the Borders Constitutional?

Impending Russian Annexations in Ukraine and Escalations of Rhetoric Increase...
Scroll to top