Voter data indicates that American Muslims are registering to vote in record numbers. The Presidential primaries have drawn interest and intrigue among American Muslims, who in the past have felt ignored or even like a political liability.

According to a study from the Institute for Social Policy and Understanding, a Washington D.C.- and Dearborn, Mich.-based research institute that studies trends impacting American Muslims, 60% of American Muslims polled in a 2016 nationally representative study said they were registered to vote. In 2019, that number went up to 73%.

The Iowa caucuses had mixed results for progressive and moderate Democratic presidential candidates based on who helped caucus in the state. The New Hampshire primary also served up razor-thin victory margins. After Nevada results from this weekend, the field has begun to thin.

Mosques began to be used as caucus satellite sites in Iowa for the first time in 2020, providing unprecedented access to Muslim communities to be a part of the election. The Muslim swing vote will be even more critical in future primaries, which may also be decided by razor-thin margins. The deadline to register to vote or change party affiliation in most states is also approaching.

While some Muslim voters have resigned themselves to a second term for President Donald Trump, others have joined campaigns to get out the vote. This divide between political apathy and fervent support is similar to historical patterns for other minority groups.

Professor Ibram Kendi at American University notes the phenomenon of the other swing voters who are ignored. The perception of swing voters is they are those who switch back and forth as Republican or Democrat based on the candidate. Kendi says that other swing voters shift between voting Democrat and not voting.

Professor Altaf Husain at Howard University says masjid leadership is crucial for civic engagement, “Educating our congregations on the importance of voting, encouraging them to register to vote and then to actually vote are all integral steps to ensuring that individuals with the best solutions to complex social issues are elected.”

Minnesota Attorney General and former U.S. Congressman Keith Ellison emphasizes voter turnout as a key to election victories. In an interview with Vox in 2017, when Ellison was the frontrunner for chair of the Democratic National Committee, he called for an attitudinal change in the party, making it clear that a focus on expanding turnout beyond the likely voters in swing states will change the way we approach voting. What Ellison did in 2006 and subsequent years was not only convince people to vote for him, but also to register new voters. Those who had never voted before voted for him.

A 2016 ISPU report indicated that community leaders and activists had to utilize the power of at least 750,000 people across the country sitting at the mosque on Friday. The study indicates that religious associations create an inherent network that can mobilize citizens to vote.

Manal Fakhoury, chairwoman of the civic engagement organization United Voices for America, underscores the importance of political engagement. She points out: “We must understand the value of engagement and add our voice to the conversation. It’s time for a political shift and a community awakening.”

Trump’s strategy for outreach to evangelicals at churches was especially critical to his support in 2016. Trump knows the power of polarization. Interestingly, Trump’s campaign is energized by bigotry. ISPU scholars Youssef Chouhoud and Dalia Mogahed note in ISPU study, Which Muslims Voted for Trump? that racial resentment is a consistent factor for Trump supporters: “It is not surprising that Black Muslims are significantly less likely to approve of the president’s time in office compared to all other racial and ethnic groups.”

In an in-depth report, American Muslims in the 2016 Election and Beyond: Principles and Strategies for Greater Political Engagement ISPU scholars Tasneem Siddiqui, Laila Alawa, Youssef Chouhoud, and Dalia Mogahed recommended the following to mobilize voters in the mosque:

For many, the 2020 Presidential election is about turning the tide on this cacophonic GOP hate. Cornell Law Professor Aziz Rana says in an interview in Dissent Magazine: “One of the biggest challenges facing the left is to restitch its political memory, to develop the cultural institutions (which existed in the past)—from sites of popular education and workplace activism to party structures themselves—that collectively create a daily experience of liberation and community.” 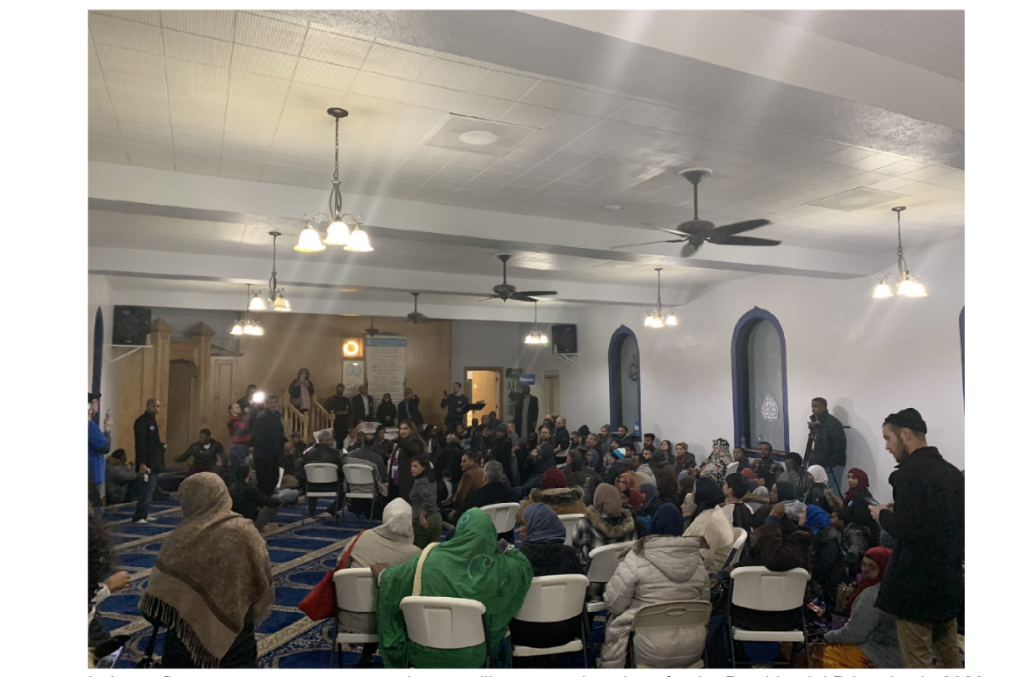 Iraq War Fiasco: At a Cost of 1 Million Lives and $5 Trillion