This article was first published on the Center for Global Policy.

Unlike his predecessors, the current Iraqi prime minister has spoken out against militia violations. But his failure to follow through further erodes state authority.

Iraqi Prime Minister Mustafa al-Kadhimi made a publicized visit to Farhatiya district in Salah al-Din province in late October to spend time with families of young men found dead at the hands of unknown assailants. In casual attire, he vowed to personally follow up with investigations into the incident, in which at least 12 civilians were kidnapped and eight of those were later found to have been killed, execution-style. “Terrorism will not find refuge regardless of how hard they try to infiltrate,” Kadhimi said.

His remarks came two weeks after a similar visit to Dhi Qar province, where he assured family members of demonstrators slain during protests there that an ongoing investigation would reveal their killers. And in July, he made similar promises to the family of slain Iraqi security expert Husham al-Hashimi. Thus far, no arrests have been made in any of these incidents.

Kadhimi’s rhetoric is dubious, but it is a step apart from the positions of his predecessors. For example, at the height of rampant mistreatment of Sunni civilians by Iraq’s state security apparatuses between 2012 and 2014, former premier Nouri al-Maliki not only refused to acknowledge the violations but accused those with legitimate grievances of being traitors and terrorists. Maliki’s successor, Hayder al-Abadi, was less accusatory, but he did infamously tell journalist Jane Arraf that only eight civilians in Mosul died in the grinding military operations to retake the city from ISIS when the actual death toll was at least 11,000.

Whatever Kadhimi’s intentions may be, acknowledging the victims and offering condolences without actually taking any action both harms his credibility among Iraqis and indirectly undermines what is left of Iraq’s fragile state. Kadhimi is not balancing between his need to contain the powerful armed groups and reality. Instead, he is handing those groups a direct victory by signaling they are out of reach of the highest-ranking official in the country.

Kadhimi’s weak position is not just about him as an individual leader. Rather, it is reflective of an Iraqi state that remains dangerously weak. This is a trend that, if left to its own devices, will translate into the country falling deeper into Iran’s geopolitical orbit and vulnerable to an ISIS resurgence. It is thus imperative that Washington increase its support for Baghdad – going beyond the assistance against transnational jihadist forces.

One of Kadhimi’s recurring vows that overlooks an important state dysfunction is to rid the country of “outlaws.” He has also promised to restrict weapon use to the state and has received generous praise for his ambitious reform plans. However, the groups suspected of causing the most damage are not outlaws by any measure. As slain security analyst al-Hashimi articulated in one of his last TV appearances, “These armed groups are hybrid in a sense that they are an official part of the state while carrying out illegal acts.” Former Prime Minister Haider al-Abadi designated the Popular Mobilization Forces (PMF), an umbrella of largely Shiite militias, as an official combat force that is legally part of Iraq’s security apparatus. Some of these groups boast openly about moonlighting as “Islamic resistance,” yet they remain a formal part of the Iraqi state. The dynamic is complicated and requires the incremental implementation of a well-thought-out plan. Unattainable promises to buy time will not serve the prime minister well in the long run.

Kadhimi recently expressed a desire to have a dialogue with these armed groups rather than confrontation, saying, “1,000 years of discussion is better than one moment of exchange of fire.” But no discussion is taking place. Stated-subsidized armed entities continue wreaking havoc as they please while the premier fails to extract any concessions. His other dramatic quote, “I am on a rope between two tall buildings. I am not required to walk on the rope, but to ride a bike on the rope. I dance on a daily basis with the snakes, but I am looking for a flute to control the snakes,” relays weakness and defeat.

Kadhimi’s words imply that holding those accountable for crimes against Iraqi people would play into the escalation between the United States and Iran. That sets a dangerous precedent that denies the agency of ordinary Iraqis. Washington’s pressure over pushing back Iranian influence is debatable, but justice for Iraqis meaninglessly killed over the right to protest or criticize should not be up for negotiation.

However, demanding Kadhimi go all in against rogue, state-sanctioned, Iran-backed militias is an unrealistic ambition. Military action would unleash a war between Iraq’s army and other forces, and between segments of the Popular Mobilization Forces. Kadhimi is unlikely to push for an assault akin to al-Maliki’s Operation Knight’s Charge in 2008, which benefited from parliament backing and heavy U.S. military presence. The operation was primarily focused on Basra, and Muqtada al-Sadr, then leader of the rogue Jaysh al Mehdi, called for a cease-fire. Today, these groups exert their influence over all of Iraq at every level of state and society. U.S. and coalition military support have articulated that their assistance will only be channeled to combat ISIS. Kadhimi also lacks the political support inside Iraq’s parliament. Although the country’s top cleric Grand Ayatollah Ali Al-Sistani has been rumored to support Kadhimi’s efforts, there is no evidence that the clerical establishment in Najaf would in any sense back what it may view as an intra-Shiite military confrontation.

Kadhimi has demonstrated his desire to go after the militias. Last June, he ordered a raid on Kataeb Hezbollah, one of the most notorious armed groups, in connection with the Katyusha missile attacks on the U.S. Embassy. Several members of the militia were arrested and then promptly released. In September, he sent the elite Counter Terrorism Service to free a kidnapped activist in southern Iraq. The forces, along with local army units and police, failed to free the activist, whose whereabouts remain unknown.

Both incidents show the level of domination and impunity that the militias have in Iraq and explain the prime minister’s hesitance in taking action. However, he is at risk of losing more by inaction than by taking some measures. Allowing the militias to go unpunished diminishes his chances at securing votes in the upcoming elections slated for June 2021. Protesters and activists have been generous in trusting that Kadhimi needs more time, but the armed groups appear emboldened by inaction. Missile attacks targeting the U.S. Embassy may stop for a period because of engaging and/or conceding to the militias, but their crimes against the Iraqi people have not ceased since last October.

Iraq’s current economic woes and struggle to pay public employee salaries is giving more leverage to the militias. Since the liberation of areas previously under ISIS rule, the PMF established a racket system and imposed its management of markets in Mosul, Salah al-Din, and elsewhere. With unemployment soaring and the likelihood of the public sector collapsing with few alternatives in the private sector, the PMF may soon become an enterprise that pays for a potential recruiting pool of thousands of young men.

A large-scale military confrontation is, for the time being, out of the question. The Iraqi state should, however, make arrests for the assassinations of activists. Mere statements, such as Kadhimi’s recent pronouncement that “threads to such murders are coming together,” are not enough. Militia leaders themselves have condemned the assassinations while exonerating the PMF from accusations. Even al-Sistani has called repeatedly to “unveil those responsible for the assassinations of activists.” With an abundance of forensic data, eyewitness accounts, and recorded threats, prosecuting those directly involved is widely supported and can be done. Of course, Baghdad’s strategy will need to factor in ways to mitigate for backlash.

Even among the ranks of the state’s security apparatus, accountability should be a priority if Kadhimi wants to meet some of the popular demands. There is plenty of video evidence that shows riot police and other security personnel using unnecessary force against unarmed civilians. Prosecuting those actors would be more affordable than conducting failed raids that end in victories for the militias and would send an encouraging signal to potential voters that the rule of law can still prevail in Iraq. Disadvantaged poor youth (a PMF recruiting pool) would be less encouraged to join militias involved in and convicted of criminal activity. It would also send the international community a message that Iraq’s current leadership is worth investing in and assisting.

Steps toward justice can help Kadhimi gain public support while slowly changing some of the realities on the ground. Inaction allows the Iran-backed militias to expand and sustain their dominance, which further incapacitates Iraq’s ability to navigate through the rippling economic challenges as these groups continue to exert dominance on businesses with coercion and violence. The Islamic State’s increasing activity is a high-risk security threat that would be impacted by leaving militias unchecked because they threaten U.S. and coalition forces’ missions. The Islamic State will undoubtedly exploit the legitimate grievances of militia victims like the young men in Farhatiya district to ignite sectarian rifts. The United States should continue providing military support to the Iraqi Counter Terrorism Service and further assist Iraq’s intelligence to assist with tracking down threats, capturing assailants, and busting illegal financial networks.

Kadhimi is at a crucial point. The threat of a possible showdown between the United States and Iran on Iraqi soil is a constant refrain with little evidence that it is imminent or even likely. However, the threat of militias taking over full control of Iraq is real, and good intentions alone will not save the country. The Iraqi premier will need all the help he can get from Washington to be able to better manage the pressures from Tehran. Countering Iran’s expansionist regional ambitions requires strengthening the Iraqi state.

Rasha Al Aqeedi, a nonresident fellow at the Center for Global Policy, is an Iraqi researcher and analyst whose research focuses on the social and political compacts of Iraq, regional conflict, minorities, and non-state actors. Al Aqeedi has worked in Iraq and the UAE and is currently based in Washington, D.C. She tweets at @RashaAlAqeedi 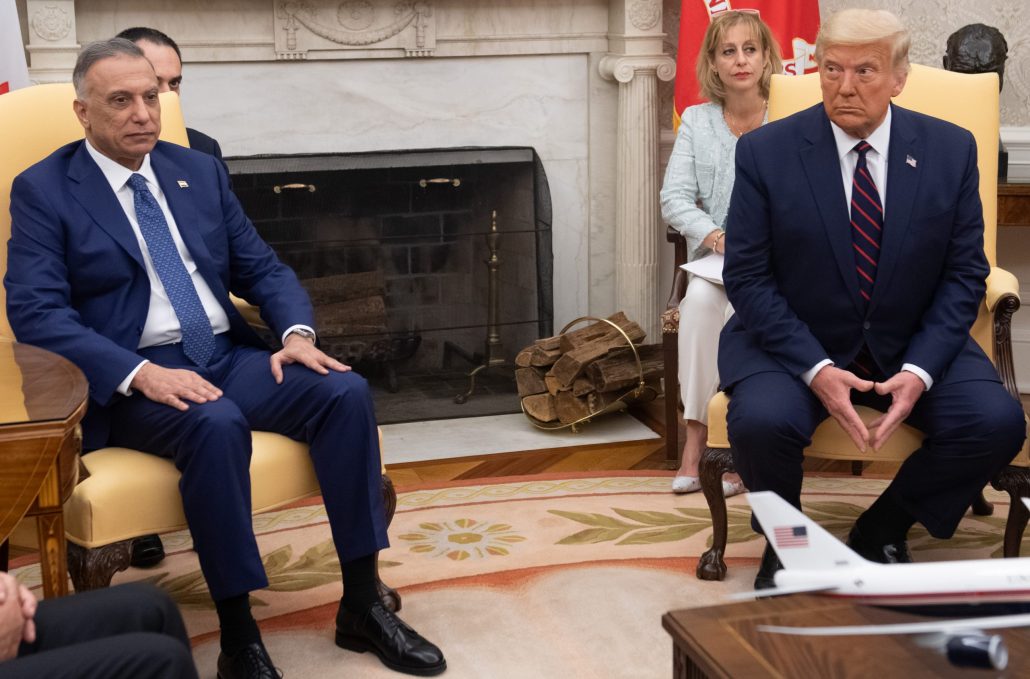 Take Action! Tell the President NOT to Nominate Raymond Kelly!
ADC Open Letter Ray Kelly As you may know, DHS Secretary Janet Napolitano recently announced that she will be stepping…

Getting Through the Holiday Season

© 2020 MuslimObserver.com, All Rights Reserved
Block Flournoy for Defense; Murphy Instead

COVID-19 and its Impact on Body organs
Scroll to top