The MY-ICD Youth committee proved the famous proverb: “If you want to go fast, go alone. If you want to go far, go together,” Nov 3. Manifestly, their team effort echoed, as they successfully sold-out their annual fundraising dinner for 300 attendees in less than three weeks. MY-ICD is the youth committee of the Islamic Center of Detroit, founded in 1998, instantly establishing a community center and second-home to many.

The night began with welcoming, remarks by Yara Alrefaai, followed by a soothing recitation of Qur’anic verses. Subsequently, Imam Dr. Abdelhamid Salem, the Imam of the ICD since February of 2015, gave very insightful and motivational words, after opening with a heartfelt prayer for the youth. He remarks that in order for an idea to succeed, fundamentally, it needs full belief (imaan), sincerity (ikhlas), motivation, and much strife (action). Without these four, it’s hard for an idea to succeed. He went on to recite the beautiful verse, “…Indeed, they were youths who believed in their Lord, and We increased them in guidance.” [Qur’an: Surat Al-Kahf: 13]

Up next, Dr. Raed Jasim, the current chairman of the ICD board, was welcomed to the stage. He gave warm welcoming remarks to all attendees, and on behalf of the entire board, expressed utmost support to the youth in the community. Then, the Dearborn Police Chief, Ronald Haddad, came up to say a few inspiring words. He starts his talk with a question: “Can I have all the MY-ICD youth volunteers stand up, please?” as he requests the crowd to acknowledge them with applause for their hard work and continuous efforts. He reminds everyone to never look at things in life as if you have a chore or burden, but as a foundation of the next step of your life. “Finish it, conquer it, and go on to the next step,” he affirms. He went on to say how proud he is of Dearborn, and how he travels around the country constantly bragging about the youth back home.

Remarkably, the MY-ICD consists of numerous subcommittees, which the assistant youth director, Khansa Alhaidi, introduces next on the program. She mentions how there are over 40 individuals in the committee, all with the same vision: be leaders of youth programming workshops, events, and more to benefit the community, and that the MY-ICD Youth consists of a culture of learning and giving in order to change the communities. One by one, the heads of each sub-committee came up to the stage, introducing their committee, their mission, and successful achievements they’ve accomplished this far.

MY-Revival committee was introduced by one member, Mohamed Chaar, and essentially consists of planning the weekly lectures for Friday evening. They have been conducting a weekly series with Dr. Mohannad Hakeem, a local youth coordinator and speaker, covering the biography of the Prophet (peace be upon him). Mohamed says that MY-Revival team continuously remind themselves: no people sit in a gathering in which Allah is mentioned, except that the angels surround them and ask for their forgiveness. It is what motivates them, inspires them, and keeps them striving to do more.

TeamFajr coordinated by Issa Ghaleb, is another subcommittee which hosts a weekly program after Fajr for high school boys. It is run by Dr. Yaqoub, one who is looked up to by many of the youth. They motivate the youth to come to Fajr prayer, and have a short discussion thereafter, currently studying the 40 ahadith of Nawawi. Moreover, they go out for recreational activities as a team, such as bowling, to build bonds beyond learning.

The community service team, led by Iman Saker, aims to provide and build relationships with other youth, and instill the necessity of conducting services at a young age. Some of many services they’ve conducted thus far include partnering up with Make-A-Wish Foundation, packaging food for needy families at Gleaner’s warehouse, and hosting a food drive at the ICD. They have a mission to give back to the community, and clearly, they’re doing great meeting their goal.

Malak Silmi is the co-lead of MY-Activism team, which are inspired by the verse, “…Indeed, Allah will not change the condition of a people until they change what is in themselves…” [Qur’an: Surat Ar-Ra’d: 11] They aim to have their youth speak up to injustice, and recognize the importance of standing for justice in the community.

The monthly qiyam program was introduced by Isaa Ghaleb, and is col-led by Aishah Jabbar and Isaa. He shares how until today, himself and many others still recall their qiyam memories at the ICD from years ago, and for that, felt the yearning to give youth today the same experience. The purpose of the qiyam is to keep the youth engaged and tied to the masjid, even if they are enjoying their time doing activities or listening to a lecture with their friends. It’s the concept of experiencing a bond, and strengthening their faith that counts. He introduced that they have their new resident scholar, Shaykh Suleiman Hani, and mentioned some of the past programs, and others coming soon.

Yusra Muflahi is the head of the MY-ICD Mental Wellness committee, which carries the objective of taking away the stigma of not speaking about mental illness. This sub-committee was launched in January 2017, one of the newest committees, and has been very proactive this far. They’ve hosted art therapy for children and adults, parent support groups where parents can speak comfortably to professionals, workshops and panels conversing substance abuse, and much more.

The vice lead of the media team is Munira Almadrahi, who takes care of all the reminders and notifications for the various events. She mentions how the youth committee overall, is very dynamic and diverse in background, ages, majors, and experience levels. They have made 37 HD videos, 13 and more competitions with over 200 participants, over 10 motivating series, and best of all, they have reached 4,000 followers across all media platforms. Lastly, she says, “I wouldn’t be part of the media team if I didn’t tell you to take out your phone and follow us on social media.”

Ibrahim Nasser, the assistant youth director, introduced the special projects, such as leadership training, the summer-long Ilm Intensive, and currently the two-semester weekly class with Shaykh Suleiman Hani, covering topics of spirituality, Islamic history, Qur’anic studies, and more. Many of the team members take on leading the special projects, and have done extraordinary work. This weekly class is offered separately for high school studies, and college and youth professionals as well. They also have the Muhsen certification program, and many more extraordinary projects taking place.

Next on the program, a heart-warming slideshow of MY-ICD’s events was played, bringing back remarkable memories and touching the hearts of many in the audience.

The guest speaker, Imran Salha, began speaking about the relationship of Prophet Yusuf and his father, and points out how the nurturer and the child’s relationship was healthy. When there is a healthy relationship between youth and leaders, the youth naturally speak to their leaders. His father gave him practical advice, in blocks, talked to him about his forefathers and history, and followed by leaving him with a long-term vision. Imran advises to know your legacy, and know the value of our scholars, as many today outside of the faith look up to them in unordinary ways. Fundraising was next on the program, to support the remarkable work the youth are continuously doing.

The spoken word artist, Amal Kassir, gave a very profound message through her spoken word talent. “Resilience is what makes you get up when there is nothing left. When everything falls, every accomplishment and every dream, will you fall in sujood or feel like there is nothing left?” She goes on to say, “Leaders, which you all are, need to commit to their hearts. Why are we divided? What are the diseases of the heart? Pride, envy, and gossip, are merely a reflection of the heart. Judging others not as religious of you, is a disease; you should be grabbing them, not pushing them away,” she remarks. The audience applauded such talent, as the program began to wrap-up.

It was an honor interviewing Yara Alrefaai, as it gave deep insight of the unique inspiration and dedication the MY-ICD volunteers carry. While planning for the qiyam, media, and workshop teams with MY-ICD, juggling her studies as a Pre-Med student at Henry Ford College, as well as volunteering with two other organizations, Yara clearly is fitting the bill of giving back to her community.

When asked, “what inspires you most about ICD Youth?” She responded, “It’s really hard for me to pinpoint one aspect of MY-ICD that inspires me the most, but if I had to choose, it’d probably be the teamwork and brother/sisterhood between all the members. When we have a big event, no matter what team that event is being planned and executed by, everyone helps. And by everyone, I literally mean EVERYONE. Even our Youth Director himself, Ustadh Khaled Saleh, gets involved and helps however he can. Throughout all the events, the members of MY-ICD have also become very close-knit. We all know one another, not just within the committee, but even outside MY-ICD. A lot of us go to the same college/university, take part in the same MSA, and even live in the same neighborhoods. We truly are one big family alhamdulilah!”

Closing remarks may have ended the delightful dinner this evening, but the projects and continuous work of MY-ICD youth is evidently ongoing. 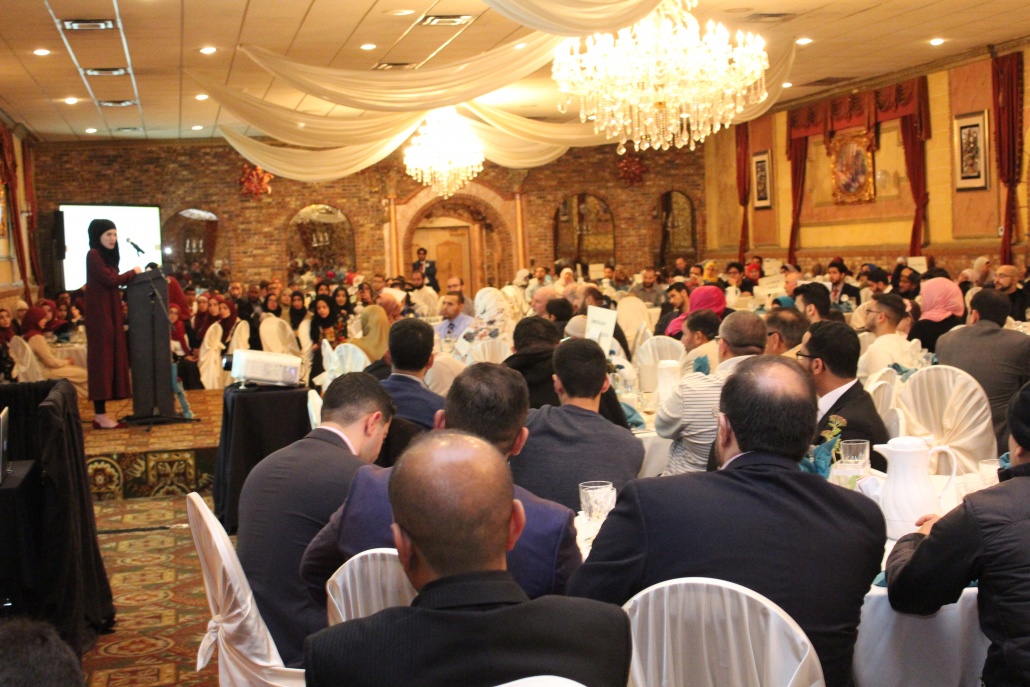 Review: SERVE: A Call to Muslims, By Soraya M. Deen

Islam in Cambodia
The post-Khmer Rouge nation is a portrait of tolerance for Muslims, but the US worries that this could change. Courtesy…