Press Release for Ganga To Mississippi: Walking With The Rainbow 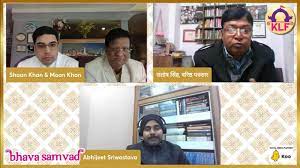 by Moon Khan and Shaan Khan

“Ganga To Mississippi – Walking With The Rainbow” is a memoir, a family history, part family novel, part self-examination, interspersed with generational trauma, and imbued with immigrant folklores, all in a package of realism and ‘counter archive.’

Written by an India-born immigrant, Moon Khan, who had to leave the country like millions of Indians in search of better prospects, the memoir reads like a cinematic play-by-play of life in the rural part of India. Settled in Chicago, USA, Moon provides an absolutely captivating social, cultural, and historical commentary on India’s development from the 1960s to the 1980s.

If you are here for twists on twists on twists, this is the book for you. The book is co-authored by Moon’s son, Shaan Khan, who was born and raised in the United States. Shaan’s perspective gives the book a multi-generational and an international flavor.

Commenting on the book at the launch of the memoir from the platform of Kalinga Literary Festival, Santosh Singh, Author and Assistant Editor of the Indian Express, portrays the link of the two generations as a link between Ganga and Mississippi – Moon representing Ganga and Shaan identifying with Mississippi. Singh also wrote the Foreword for the book, which is available on Amazon, both in the USA and India. Its Kindle version is only $4.99 or Rs. 371.

Ramesh Soparawala, Resident Editor, India Post, USA, calls it “a historical story that will linger with readers like memories of their first love.”

“It’s a testimonial of what we can all achieve if we accept the challenges,” says Dianne Pappas, a Yale law school graduate, and an American politician. Moon’s life has been a saga of very poor to very rich. Simultaneously, it was also a tumultuous journey from ordinary to extraordinary, from despair to repair, from shattered streets to shiny tollways, from a tiny village of Bihar, India, to metropolis like Chicago.

Arun Kumar, Associate Editor, Hindustan Times finds “a super trajectory of identity” in the 233-page book, which was published in January 2022. Moon believes in a multitude of identities. Reinforcing the idea of solitary identity is like asking someone if he likes his wife or his mother, his kidney or heart, his son or his daughter. Moon explains this dilemma in a chapter titled “Who Am I?’

Atul K. Thakur, Author, Columnist, Literary Consultant, calls this an amazing novel of unanswerable questions as well as mysterious and innovative curiosities. “A work to be recognized for its honest reflections. Moon Khan’s journey assures hope,” he added. “With this memoir, you’re in on some very juicy gossip.”

Senior Journalist, Bibhesh Trivedi, advises, “Come hungry with a gorilla like appetite to a grand buffet. This memoir reminds us that no matter how far you fly, the past is always near and part of your dream.”

According to Danish Reyaz, Group Editor,  Maeeshat, Ganga to Mississippi is a provocative, defiant, clever, painful, empowering, and hilarious novel of literary climax that you read while unchecking your biases.

Moon Khan and Shaan Khan have written a captivating memoir, with unique rhythms, dusty winds, and live characters that incarnate the voices and aspirations of most Indians. The father and son duo would take you to places you did not know you wanted to go because they write in a tingling humorous style with a poetic touch.

Reviewing the book, Obaidur Rahman, Founder Chairman, Rahman 30, In Association with Super 30, writes, “Ganga to Mississippi provides an achingly accurate description of an emotional and physical connection that feels as though it describes a whole life. The memoir is an open letter to progeny, a suturing of past and present – with so many swerves it feels like a Formula 1 track.”

The titles of a few chapters of the book may encourage you to buy this book.

Be Obedient to ALLAH
By Imam Abdullah El-Amin, Muslim Media News Service (MMNS) Note: As Ramadan approaches, this article is being repeated to help…