Critical Race Theory. What is it, and why does the right-wing hate it so much?

First published in The Incision

Why are Black babies two times as likely to die before their first birthdays? Why are Black mothers three times as likely to die having them? Why are there so few Black millionaires in a society where so many white men are billionaires?
The answer to these systematic differences in wellbeing among Black and white Americans can’t simply be explained by individual acts of overt racism. Biological explanations (“Black people are more likely to have gene X…”) are consistently disproven by the evidence. And cultural explanations (“Black people choose…”) — which are inherently racist — don’t pass muster either. Take, for example the fact that infants born to college-educated Black parents are still twice as likely to die as those born to college-educated white parents.
So how do we explain these systematic differences?

What is Critical Race Theory?

That’s where Critical Race Theory (CRT) comes in. It posits that these overwhelming racial differences aren’t the consequences of individual racist slights. Rather, they are the consequence of implicit bias that shapes the laws and contours of institutions in ways that systematically discriminate against Black people and other people of color — in short, systemic or structural racism.
We find structural racism in the ways that we allow redlining by the Federal Housing Administration more than half a century ago to shape school funding through property taxes today. We find it in the location of pollutant-spewing factories in those predominantly Black redlined communities. We find it in the old boys’ clubs that often implicitly, if not explicitly, exclude women and people of color that open doors to certain jobs.
Critical Race Theory implies that our laws and institutions perpetuate racial differences in outcomes across society. These laws and institutions directly harm people of color — but, in doing so, they also benefit those against whom they do not discriminate. That benefit is referred to as “white privilege.” White privilege has been twisted by its critics to imply that every white person is more privileged than every Black person. Rather, it implies that there is some underlying baseline level of privilege in not being discriminated against by society’s laws and institutions.

Why does the rightwing hate CRT?

To be sure, some of the opposition of CRT is rooted in frank racism. America’s most extreme rightwing has embraced a white identitarian politics that casts this country in ethnic terms. “Blood & soil” movements seek to define America as a country for white people.
Any effort that seeks to promote equity — particularly as a matter of public policy — raises their hackles. The irony here is that their opposition validates CRT’s precepts: they are implicitly admitting that society and its institutions tend to advantage white people, and maintaining — even deepening — that status quo is a goal of their movement. What’s more, they attempt to cancel CRT because they understand that discriminatory laws and institutions didn’t arise on their own, rather society’s cultural norms and narratives have fed and watered them. Silencing any critical discussion of race is simply about protecting that advantage. The fact that “race” is right there in the name makes CRT a prime target for attack.
But not all of the opposition to CRT is rooted in direct antipathy for Black people. Much of it is about absolution from implied guilt. And that rests in the way that the rightwing constructs its worldview. The fundamental kernel of conservative thought is the belief in individual agency. Former British Prime Minister Margaret Thatcher summed it up in an interview with a women’s magazine in 1987:

They are casting their problems at society. And, you know, there’s no such thing as society. There are individual men and women and there are families. And no government can do anything except through people, and people must look after themselves first. It is our duty to look after ourselves and then, also, to look after our neighbours.

In that telling of society, society doesn’t exist, individuals control their own destinies, and the government should just get out of the way. When individuals succeed, it is because of their own hard work. When they fail, it is because of their laziness, bad choices, or bum luck.
You can see the fault lines with CRT emerging: Not only does CRT posit that society does exist, but implies that it exerts forces on people that are independent of their own actions—and that these forces differ by race, gender, class, country of origin, etc. CRT at once attacks the myth of individual agency, implicitly robbing people of the full credit of their accomplishments and implies that the forces from which they benefited directly opposed others.
But because conservative thought doesn’t recognize the role of society in shaping outcomes, CRT’s critiques of racially discriminatory laws and institutions get translated back to individual terms. Systemic racism gets translated into individual racism; recognizing white privilege gets warped into “teaching my kids they’re racist just because they’re white,” as one aggrieved white parent put it at a school board meeting over CRT in Loudoun County, Va.
But here’s the irony: CRT doesn’t imply that all white people are racist. Rather, it implies that they have a choice about their relationship to the structural racism that holds down so many people of color. Ignoring it doesn’t make it go away, it just gives it power. To make it go away, one must dismantle it — which is the point of CRT in the first place.
Share on Facebook Share
Share on TwitterTweet
Share on Google Plus Share 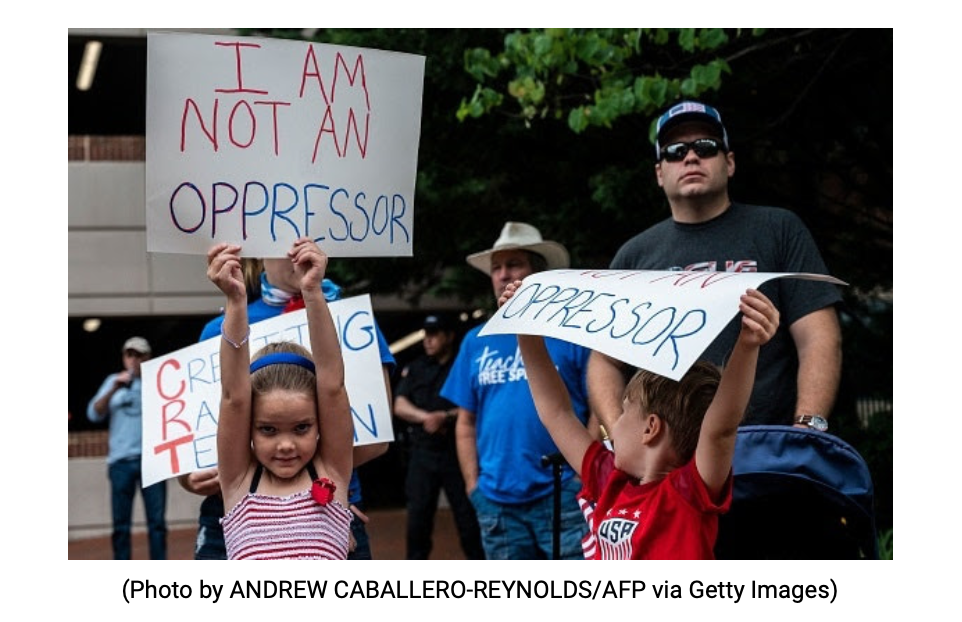 It’s the Guns – But We All Know, It’s Not Really the Guns

Sunnis and Shias must unite against sectarianism

Hajira is Hajira (Hagar is Hagar)
Scroll to top