Across the country, several thousand university students were unable to commemorate their graduations over the past two years due to the coronavirus pandemic. While their graduations were severely delayed, the University of Michigan’s class of 2020 students—who didn’t have a traditional commencement ceremony—were in for a treat this weekend: They had the country’s top disease expert deliver their graduation speech.

Students applauded and smiled as Anthony Fauci, medical adviser to President Joe Biden and director of the National Institute of Allergy and Infectious Diseases (NIAID), entered the stadium. Class of 2020 graduates and some 2021 graduates were in attendance for the “Comeback Commencement” ceremony on May 7, The Detroit News reported.

During his speech, Fauci advised students to approach life expecting the unexpected.

He used examples of his own life to speak about HIV and rare cancers in men being detected across the country.

“You will confront the same types of unpredictable events that I have experienced, regardless of what directions your careers and lives take,” Fauci said. “So, expect the unexpected, and stay heads up for an unanticipated opportunity should it present itself.”

He then dove into the country’s issue of divided politics, emphasizing the importance of seeking the truth. He expressed his concern for the spread of misinformation and asked students to challenge what he called the “normalization of untruths.”

“If you remember nothing else from what I say today, I truly appeal to you, please remember this: It is our collective responsibility not to sink to a tacit acceptance of the normalization of untruths, because if we do, we bring danger to ourselves, our families, and our communities,” he said.

“This is how a society devolves into a way of life where veracity becomes subservient to propaganda rather than upheld as a guiding principle for creating and sustaining a just social order.”

Of course, Fauci’s speech could not be completed without applauding the students whose lives were severely impacted by the pandemic.

“Each of you deserves enormous credit and respect, and I mean that, for your extraordinary adaptability, your resilience, your dedication to learning, completing your studies, and graduating despite immense difficulties in uncertainties,” Fauci said. “And I say with all sincerity that I am in awe of you for that.”

According to the university, approximately 4,100 graduates RSVP’d for the event.

Prior to his address, Fauci was presented with an honorary Doctor of Science degree and received a loud ovation from the crowd inside the stadium, but of course not everyone attending the ceremony Saturday was happy. According to Detroit Free Press, a couple of dozen protestors rallied outside the stadium where Fauci spoke. They held signs blasting Fauci and COVID-19 vaccines that read “Fauci killed my mom,” “Arrest Fauci now!” and “Fauci = Dr. Death.”

Among them was former Republican state Sen. Patrick Colbeck. Colbeck ran for governor in 2018 and has also pushed Trump’s theories about a stolen 2020 election—theories that have been debunked. With his wife, he decried the legitimacy of vaccines.

In conversation with the Michigan Advance Colbeck said that having Fauci speak at the commencement was a “horrible decision” and a “slap in the face” to the 2020 graduates.

“These kids … have been denied their original commencement address because of the policies that he promoted,” Colbeck said.

He also claimed that as a former University of Michigan student he was taught to be “rational.” “We approach things from an objective perspective. And [Fauci’s] the exact antithesis of all of that,” he said. “It’s a mockery of everything that’s on my diploma, frankly.”

According to the Advance, the protest was organized on Facebook, partially by Lena Epstein, a Republican candidate for the University of Michigan Board of Regents. Epstein, who unsuccessfully ran for Congress in 2018, also boosts conspiracy theories. 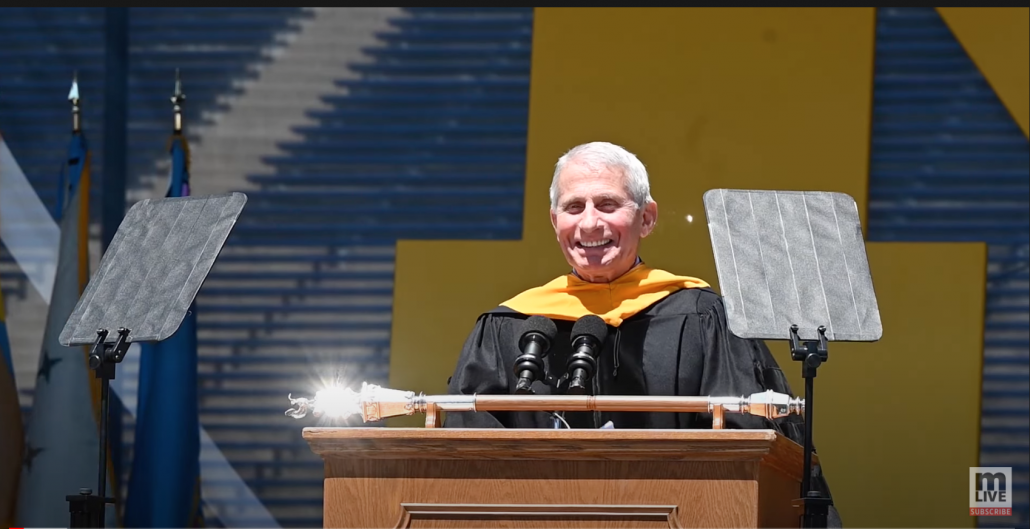