Prime Minister Imran Khan has been removed from office through a no-confidence motion passed by the Supreme Court. The National Assembly (NA)of Pakistan deliberated on the matter for more than 12 hours before deciding. Since NA Speaker Mr. Asad Qasier had already resigned from his post, the session was chaired by Mr. Ayaz Sadiq; a panel chair member.

“174 members have recorded their votes in favor of the resolution. Consequently, the resolution for the vote on no-confidence against Mr. Imran Khan, the former prime minister of Pakistan, has been passed by a majority,” Mr.Ayaz Sadiq announced after completing the process of voting. The resolution needed 172 votes to pass. The National Assembly of Pakistan consists of 342-member. Members of the then ruling party, PTI, were not present in the House during the voting.

“Neither I, nor Bilawal, nor Maulana Fazlur Rehman will interfere. Law will be upheld, and we will respect the judiciary,” Mr. Shahbaz Sharif, the President of PML-N, said, thanking Mr. Sadiq for chairing the historic session. The Balochistan Awami Party (BAP) leader Mr. Khalid Hussain Magsi, also said that he is glad to be a part of the democratic movement. He took pride in his party, having contributed “significant” four votes to the 170 figure, which helped the joint Opposition complete their total number. The session has been adjourned till 2 pm Monday, April 11th.

Pakistan Peoples Party ( PPP) chairman Mr. Belawal Bhutto said, “I would like to congratulate the whole nation and this House, as for the first time in the country’s history, a no-confidence motion has succeeded, and we have made history.”

Getting to this historic moment has been a long road for the opposition parties. Towards the end of 2021, PPP started to persuade Pakistan Muslim League-Nawaz Sharif (PML-N) supremo Nawaz Sharif to move a no-trust motion against PM Imran Khan. By January 11th, 2022, PML-N’s close ally Mr. Khawaja Asif informed them that the government had lost the majority; and that they were making some in-house changes in the Parliament.

Separately most political parties in Pakistan were moving towards the same plan. However, there is strength in numbers. In the next few months, the opposition strengthened their alliances. Talks continued between political parties that had been morally, ethically, and religiously opposed to each other for decades. Some of them had vowed never to work with one another.

In the meantime, all parties from their own platforms had announced that they would put forth a no-confidence motion against the Prime Minister. This included PPP chairman Bilawal Bhutto, PML-N President Shahbaz Shahbaz Sharif, Pakistan Democratic Movement (PDM) chief Maulana Fazlur Rehman, and MQM-P leader Amir Khan.

However, the government at the time was not taking these actions seriously and considered them merely empty threats. On February 14th, 2022, Foreign Minister Mr. Shah Mahmood Qureshi said the government would challenge the no-confidence motion politically as the “umpire” was also neutral. About a week later, Interior Minister Sheikh Rasheed challenged the Opposition to gather 172 MNAs in their camp, which they did end up doing. While the country was dealing with this uncertain situation, the PM saw it fit to leave the country on February 23rd, 2022, to meet with the Russian President.

Defence Minister Mr. Pervez Khattak was confident that the no-confidence motion would not be tabled as it was “not easy” to turn PTI MNAs. Nevertheless, in March 2021, opposition leader and former PM Mr. Yusuf Raza Gilani defeated Pakistan’s finance minister, Mr. Abdul Hafeez Shaikh, in elections for the Senate, the upper house of Parliament. This came as a significant setback for Mr.Khan, who had personally campaigned for his Cabinet colleague.

However, Mr. Imran Khan won the trust vote in National Assembly following the defeat of his finance minister, ending the political uncertainty in the country. He secured 178 votes in the 342-member lower house of Parliament. The floor test took place without the Opposition as PDM, an alliance of 11 parties, boycotted the vote. This made it easier for Mr.Khan to secure the required numbers. Towards the end of the year, The Pakistan PM had sought a vote of confidence to restore the legitimacy of his government after the Opposition mounted pressure on him to resign.

The motion no-confidence motion against PM Imran Khan was finally tabled on March 8th, 2022. Eventually, it was passed in the supreme court for many reasons that were deemed worth looking into. One day before the premier was voted out of power, during an address to the nation, he told the public that he would not tolerate the installation of a “foreign government” in Pakistan and would turn to the public for support if such a thing happens. “We are not a nation that can be used like tissue papers,” the former PM said during a live telecast. He urges his supporters to come out and protest peacefully for him.

PTI supporters gathered across the country to protest Imran Khan’s dismissal. PTI management showed on Twitter that the protesters gathered at more than 40 locations in Punjab, Sindh, and Khyber Pakhtunkhwa to no avail.

The NA will continue to function until the completion of its five-year term in August 2023. The new prime minister will perform his duties till the assembly’s tenure ends.
However, following the dismissal of Mr.Imran Khan, his cabinet has automatically been dissolved, and the NA Speaker Mr. Asad Qaiser and Deputy Speaker Mr. Qasim Suri have tendered their resignations. The new Prime Minister will choose his new cabinet. PML-N’s Shahbaz Sharif is the frontrunner for the role of PM. 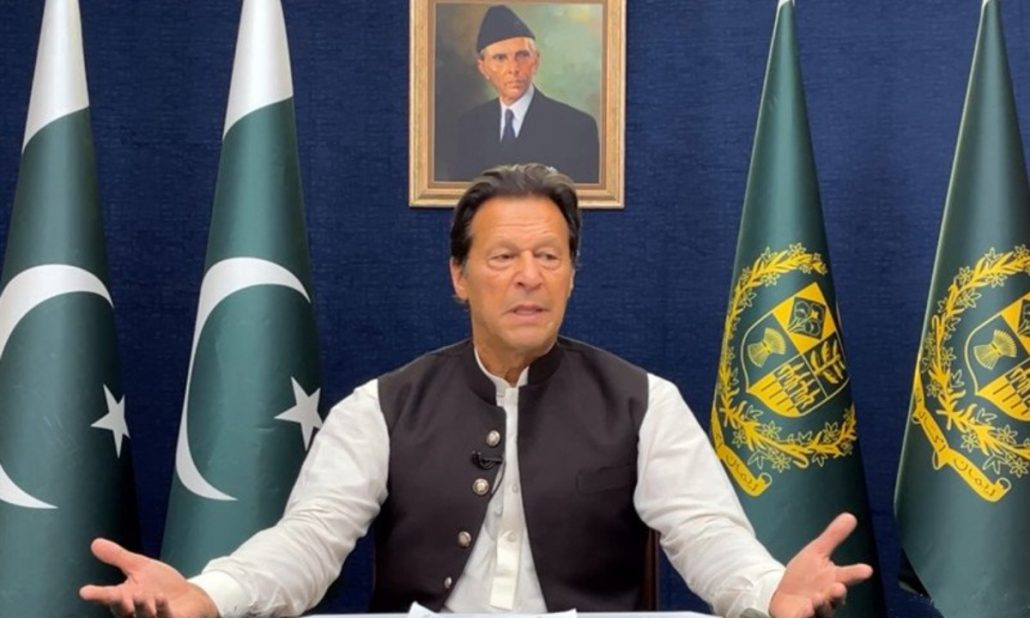 General Zinni on Iraq: The Battle for Peace
By Geoffrey Cook, Muslim Media News Service (MMNS) Berkeley--Two months ago from the day of this important public talk below…