In the face of increasing hate and Islamophobia, Democratic U.S. Reps. Ilhan Omar, Rashida Tlaib, and Andre Carson condemned anti-Muslim remarks made by their colleague, Republican Rep. Lauren Boebert, during a Tuesday press conference. According to ABC News, they are the only three Muslims in Congress’s House of Representatives.

“We may only be three among hundreds serving in Congress, but we are strong advocates that won’t shy away in demanding better for our communities. No one deserves to feel hate or racism solely based on one’s faith. It’s completely unacceptable,” Tlaib said.

During the press conference, Omar shared her experience as a Muslim American alongside the consistent hate she has received from colleagues since being elected.

“So, when a sitting member of Congress calls a colleague a member of the “jihad squad” and falsifies a story to suggest that I will blow up the Capitol, it is not just attack on me, but on millions of American Muslims across this country,” Omar said, referring to Boebert.

Last week Boebert made headlines for a viral video that circulated on Twitter in which she claimed she thought Omar was a terrorist. She also referred to the Muslim congresswoman as a member of the “Jihad Squad.” While she issued a nonapology on Twitter shortly after, other footage was found in which she spewed the same anti-Muslim rhetoric at a separate event.

“We cannot pretend that this hate speech from leading politicians doesn’t have real consequences,” Omar said Tuesday. “The truth is that anti-Muslim hate is on the rise both here at home and around the world.”

Omar not only condemned the hate but spoke of her own experiences. She shared the “hundreds” of threats she has received following attacks by her Republican colleagues. Omar even held up her phone and played a graphic voicemail in which a person issued a death threat.

Trigger warning: The following transcript and video may contain explicit or violent language and details.

“We see you, Muslim sand n***** bitch,” the unidentified man in the voicemail said. “We know what you’re up to. You’re all about taking over our country. Don’t worry, there’s plenty that will love the opportunity to take you off the face of this fucking earth. Come get it, you fucking Muslim piece of shit. You jihadist. We know what you are. You’re a fucking traitor. You will not live much longer, bitch, I can almost guarantee you that. We the people are rising up, and you will be tried before a military tribunal, and you will be found guilty.”

Omar said she received the call on Monday, hours after Boebert refused to apologize to her for her anti-Muslim remarks. The voicemail was one of many threats she has received.

“Condemning this should not be a partisan issue,” Omar added. “This is about our basic humanity and fundamental rights of religious freedom enshrined in our Constitution. Yet, while some members of the Republican Party have condemned this, to date, the Republican Party leadership has done nothing to hold their members accountable.”

“We are committed to ensuring a real consequence for dangerous statements that fuel bigotry and incite violence — especially when it is coming from one of our own colleagues” said Carson, who is the dean of the Muslim Caucus. “Rep. Boebert’s comments are an insult to this institution and to American ideals. We are NOT anyone’s scapegoat.”

The three were joined on the podium by Rep. Jamaal Bowman, who is not Muslim but stood with them in solidarity.

“I’m worried about the degradation of our values and of our psychology as a nation as our Republican colleagues continue to fan the flames of racial hate and conflict, and where that is leading us in a post-Trump era,” Bowman said. 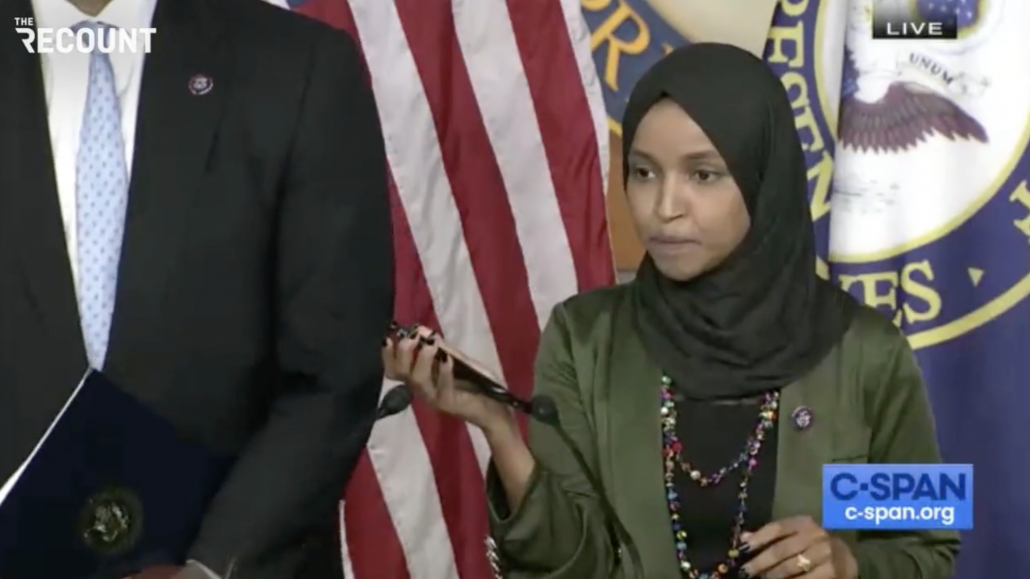