Detroit Mi. – Eric Sabree initially served as Wayne County Treasurer for 5 years. His first year, in 2015, was to complete the term of his retiring predecessor. He was elected for his first full term in 2016.  In November 2020, Treasurer Sabree won reelection to his second full term, which began on July 1, 2021.  In June of 2021, Treasurer Sabree was sworn into office by his daughter, Michigan’s 36th District Court Judge Aliyah Sabree. His wife, Badriyyah Sabree, held the Qur’an during the ceremony.  His two sons, their wives and children were also present. This was indeed a proud family moment.

Among the guests who witnessed the ceremony was former Chief Judge of the 36th District Court, Adam Shakoor, who, in 1981, became the first Muslim Judge in the United States and North America.  He served as Detroit’s Deputy Mayor during the last term of Mayor Coleman Young. Judge Shakoor was also a mentor for Judge Aliyah Sabree. He currently owns a private law practice in Detroit.

Treasurer Sabree’s family roots are in Louisiana and Arkansas. He was born in Chicago, where his family lived until he was 2 years old. The family relocated to Detroit, Staten Island, NY, and then finally settled back in Detroit. After obtaining his Law Degree, Treasurer Sabree opened his private law practice in Detroit. He later served as Chief Assistant Corporation Counsel for Wayne County and then five years as the Deputy Treasurer. Other than a brief stay as the resident Imam in Wichita, Kansas, he has spent most of his career in Detroit.

Wayne County is located in Southeast Michigan and has a population of approximately 1.8 million people. It is the twelfth largest county in the nation. Detroit, Dearborn, Hamtramck, Plymouth, Redford, Grosse Pointe, Canton, Southgate, and Livonia are among the 43 communities supported by Treasurer Sabree and his staff. Treasurer Sabree is charged with the receipt, custody and disbursement of all County funds, which includes the collection of delinquent taxes and all property tax foreclosure related activity.  He serves as the Chief Investment Officer of Wayne County and is responsible for investing all county funds.

Treasurer Sabree is very proud of several major initiatives that had never been implemented before. By showing empathy and treating his constituents with dignity and respect, he greatly improved the relationship between his office and the general public. Treasurer Sabree established partnerships with banks and non-profit organizations to provide financial counseling as well as grants to assist residents struggling to avoid property tax foreclosure.  Hundreds of thousands of taxpayers saved their homes by enrolling in delinquent tax payments plans established by the Treasurer. He implemented a text message warning system to advice homeowners of their upcoming payment due dates and established a strong social media campaign. To increase convenience for his constituents, over one hundred tax payment kiosks were established throughout the county and an online payment process was made accessible so that people can make payments anytime. He leads his office as they continue to provide and improve upon these services to his constituents. One of the results of his initiatives was reducing property tax foreclosures from 28,000 to 3,800, an 86% reduction.

Treasurer Sabree’s advice to young people, and especially young Muslims, who may be interested in public service and elected office is:

Treasurer Sabree is a dedicated member the Detroit Muslim Center and Masjid Wali Muhammad. He is also a strong supporter of Muslim youth education at Al-Ikhlas Training Academy in Detroit and other local institutions. His role ranges from being the main speaker at special events to helping clean up after programs or rolling up his sleeves to wash dishes if needed. Treasurer Eric Sabree is a highly respected and greatly appreciated member of the Muslim and general Michigan community. 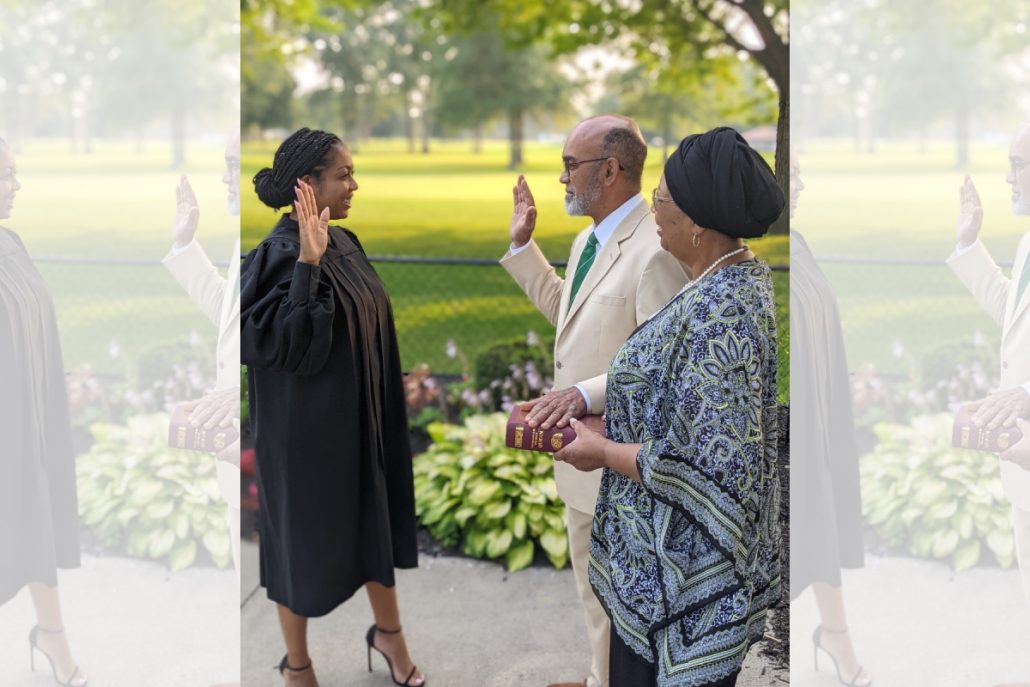 AMP Dinner as a Community Gathering
By Geoffrey Cook, TMO Silicon Valley--Your reporterâ€™s commentary on Lauren Boothâ€™s stirring observations on Palestine during Ramadan was part of…