If signed this order will be the latest restriction on immigration by the Trump administration. In May, Trump issued an executive order temporarily halting applications for new green cards to those outside of the country. The order excluded immigrants already in the country, in addition to overseas spouses and children of American citizens, but affected thousands seeking to immigrate to the U.S. Trump signed the order following promises on Twitter to end immigration amid the novel coronavirus pandemic. While it was expected then he would also suspend visa-worker programs, growing concerns from the business community delayed the action.

The new announcement to suspend work visas has raised concern among businesses especially in the tech industry that heavily relies on foreign workers. H-1B visas are primarily given to skilled workers in the tech industry while L-1 to executives who work for large corporations. According to NPR, while negotiations continue over what exceptions will be applied, the current plan would affect not only tech and executive workers but research scholars and professors of academia under J-1 visas.  Universities and businesses across the country have continuously lobbied against proposals to end foreign worker visas.

“The ban on H-1B visas, which are often used to fill very niche positions that are not easily found in the American workforce, will ultimately prove to be counterproductive and is an example of using a nuclear bomb to address a bar fight,” Leon Fresco told NPR, a former deputy assistant attorney general in the Obama administration who now represents H-1B workers.

But of course, not everyone understands the consequences associated with ending such immigration processes.

“No matter how you slice it, this is shaping up to be a big win for American workers at a critical time,” RJ Hauman said, the government relations director at the Federation for American Immigration Reform (FAIR). FAIR which advocates for less immigration has consistently urged the Trump administration to suspend foreign worker visas. “We have some concern over potential abuse of broadly written exceptions, but there is still time for that to be addressed, both now and during implementation,” Hauman said.

The group is also a designated hate group by the Southern Poverty Law Center (SPCL) with its members quoted making stereotypical remarks about immigrants.

While some, like Hauman, claim to be concerned for the lack of jobs for Americans, in addition to abuse associated with temporary visas, the truth is suspending programs such as the Optional Practical Training program (OPT) and the distribution of temporary work visas only further hurts the economy. Suspending foreign employment programs does not guarantee more opportunities in the job market for American citizens as some Republicans claim and may even eliminate potential opportunities.

Although there are abuses and flaws in these programs, not everyone participating in them is partaking in a scam. Additionally, many American companies continue to have difficulty finding qualified applicants as restrictions on work visas increase. The approval rate for H1 visas has dropped since 2018, but the process grows more competitive each year. Although thousands still apply each year, the number of those who have applied since the current administration has not only dropped but also reaches its cap within days. Trump’s 2017 executive order to review H-1B visa processing and campaign pledge to buy and “hire American,” is cited as the main source of the drop.

Allowing for qualified immigrants to come into the U.S. not only creates job opportunities but increases the country’s economy.  Data shows that foreign workers create businesses that generate jobs for locals, essentially tackling the issue of unemployment while boosting the economy. According to TIME, “immigrants are twice as likely as native-born Americans to start businesses,” and almost 50% of the country’s Fortune 500 countries are founded by immigrants. Strengthening immigration policies especially for high skilled workers hurts America and gives other countries a jump start ahead.

As the U.S. brings on more restrictions for immigrants to work in the country, Canada creates further opportunities. Instead of allowing immigrants to create more jobs and further boost our low economy, the Trump administration is causing more harm by discouraging companies from opening offices in the U.S. with its ever-growing visa restrictions. Big companies, such as Google have been announcing plans to open offices in Canada to have faster access to foreign workers.  As companies open more offices more job opportunities are created. result“Immigrants create jobs; they don’t take away jobs,” Yung Wu told Vox, CEO of the MaRS Discovery District, a Canadian technology hub. “America’s loss right now is Canada’s gain.”

Restrictions in the proposed order include H-2A visas issued to agriculture workers. According to NPR, these visas are not included in the proposal to end temporary work visas because Trump believes they are necessary to ensure grocery stores are stocked well. While Trump has continuously targeted DACA recipients despite their involvement in treating coronavirus patients nationwide, those in healthcare are also said to be exempt from the potential order suspending temporary work visas.

This was first published on Daily Kos 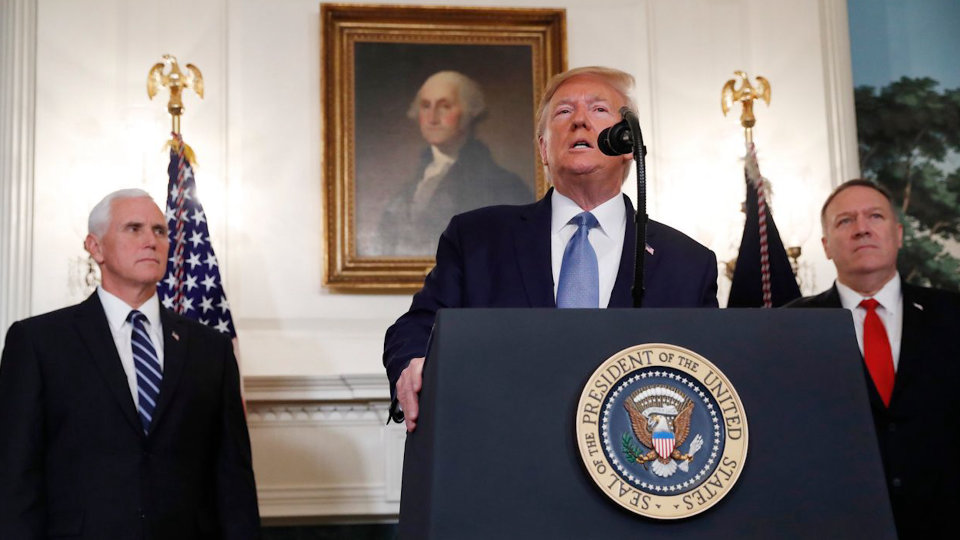 Varun In Jail: His Communal Strategy For Political Gains Misfires
By Nilofar Suhrawardy, MMNS India Correspondent Policemen clear the way for the police van in which Varun Gandhi, great-grandson of…

Maintaining Faith Amid the Coronavirus
Scroll to top