Last week, while the country mourned after the news of Chapel Hit hit the airwaves, something surprising and harmonious immerged – a strong interfaith/community service movement to show that we stand together.

Inspired by Deah Barakat, Yusor Abu-Salha and Razan Abu-Salha’s dedication to community service and activism, mourners from around the world have come together in support.
From food drives to vigils to scholarship funds based on community service, the groundswell of giving has been awe-inspiring.

Just in this past week, more than 100 vigils have been held all over the world, from North Carolina to Sarajevo to London.

“When we heard about the tragedy I knew the UNC community needed to come together and grieve,” said Shamira Lukomwa, one of the original vigil organizers in North Carolina. “Then we heard about vigils in Atlanta, my hometown, and DC, and now London and Gaza. It feels like the entire world is mourning together, and it makes each of us feel a little less alone.”

In addition, nearly 600 Muslim supporters from around the world have pledged to read part of the Quran in honor of the three youth. As a result of their commitments, the Quran will be recited more than 20 times.

Vigils and prayers have been just the first step. Many including a touching post by football players and brother Hamza and Husain Abdullah that Barakat’s last recorded photo on Facebook featured him feeding the homeless at a canned food drive.

“Our Brother Deah’s last Facebook Post was of him feeding the homeless. Alhamdulillah. In Shaa Allah justice will be served. Please make duaa for them and their families.”

To that effect, Barakat’s family announced the launch of FeedTheirLegacy.org, a canned food drive to honor the memories of the three family members.

“This is our way of grieving the loss of three young and extraordinary individuals,” said Tarek El-Messidi, who led the launch of FeedTheirLegacy.org. “Deah, Yusor and Razan all leave behind legacies of service and a proven commitment to make the world a bit brighter. Those of us in mourning are coming together … to do what they would have done: improve the lives of others.”

In addition to the website, many are continuing Deah’s initiative of raising funds for the charitable trip he had planned for this summer to provide dental care for Syrian refugees. Organized by the Syrian American Medical Society (SAMS), which sets up polyclinics close to refugee-populated areas providing medical, pharmaceutical and dental care.

Barakat along with 10 local dentists and faculty members from the University of North Carolina School of Dentistry will embark on a trip to Rihaniya, Turkey, to provide dental care to students of Salaam School.

In the past week, the donation website saw a tidal wave of donations during the following two days after the world learned about their deaths. As of today, nearly $450,000 has been raised in his memory – more than 22 times his original goal of $20,000. More than 8,000 people have donated, with most coming from anonymous donors.

“In memory of Deah, Yusor, and Razan and the goodness and light they brought to this world and with the hope of peace and solace for their families,” posted Sally Andrews Gudas one of the campaign donors.

SAMS has not dedicated funds to opening new dental clinics named for the trio in Jordan and Turkey, and it’s planning a dental clinic for the homeless in Raleigh that will bear their names, too.
The first, named for Barakat, opened Thursday at a school for refugee kids in Reyhanli.

“We’re very humbled by this generous community that is supporting such a great cause,” said Dr. Zaher Sahloul, president of SAMS, told the News & Observer. “It’s a terrible, terrible tragedy, but we’re trying to direct the energy to something constructive by focusing on the noble causes they were part of.”

A statement signed by top American Muslim scholars and religious leaders noted the powerful community that has been forged after the murders:

“This tragedy has brought so many people across the world, Muslim and non-Muslim, closer together as we share our collective sorrow and pain over the monumental loss of three beautiful people. Although our conviction and will is put to the test during these incredibly difficult times, we must not waver. We must continue to promote peace and understanding, become stronger as a community, and stay determined in our resolve to stand against all injustices and oppression.”

Unfortunately, with the good come the bad and the realization that many American Muslims are feeling less and less safe. The Muslim Students Association National has developed a Student Safety Toolkit for distribution to Muslim students on college campuses across the country.

“This is a guide to help Muslim students and Muslim Students Associations deal with the aftermath of this tragedy. MSA National encourages Muslim students to engage with their communities to create safer campus environments and to channel our collective grief towards sustaining the victims’ legacy of compassion and service.”

The one thing that is clear is that as the country and world try to make sense of this horrific crime, many are taking inspiration from the victims by giving back to the community. 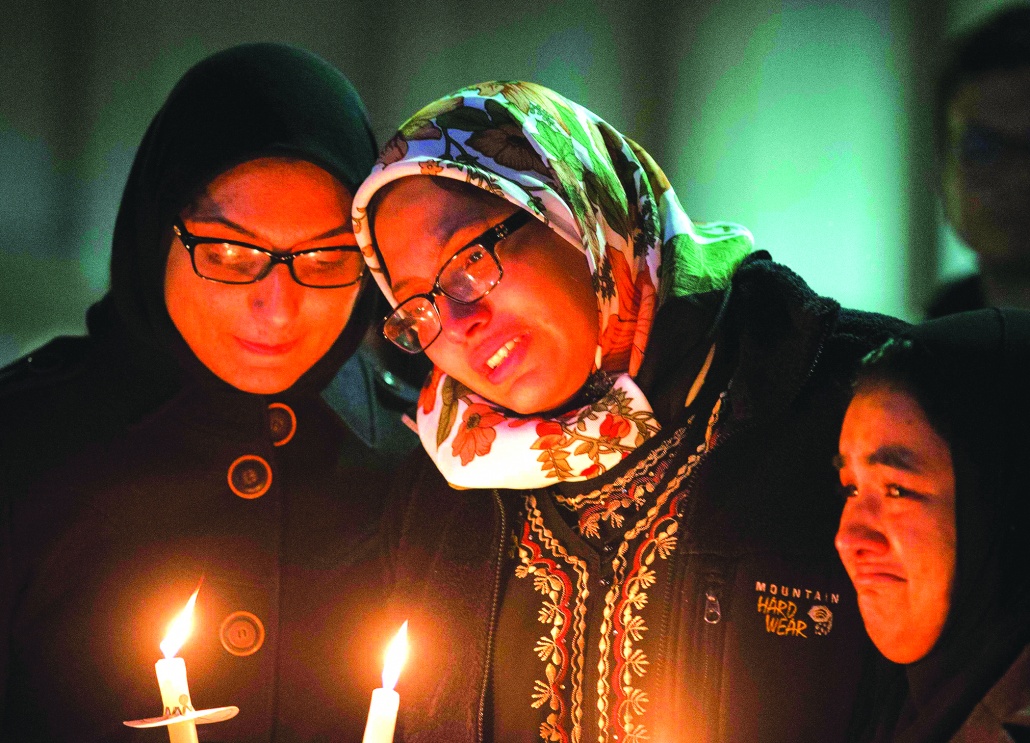 Muslima Dismissed from Game due to Hijab