“My original instinct was to pull out, and historically I like to follow my instincts,” President Donald Trump said in a speech outlining his plan for the 16-year US war in Afghanistan, at the Fort Myer military base in Arlington, Va. “I heard that decisions are much different when you sit behind the desk of the Oval Office.”

Referring to US support as “not a blank check,” Trump announced his new strategy for Afghanistan that calls for a troop increase and Pakistan to do more to stop terrorists, in a speech Monday night.

“Our commitment is not unlimited, and our support is not a blank check,” Trump said. “The government of Afghanistan must carry their share of the military, political, and economic burden.”

According to the Washington Post, he acknowledged that this “approach is a departure from his campaign rhetoric, and said he would prioritize American security over attempting to ‘dictate’ the Afghan people how to live”.

He has pledged that US troops would have a clear definition of victory in Afghanistan, but did not provide any details on what that would mean.

“The men and women who serve our nation in combat deserve a plan for victory,” Trump said. “They deserve the tools they need, and the trust they have earned, to fight and to win.”

In his address, Trump avoided various details stating he would not repeat the Obama administration’s mistake of signaling plans to US enemies.

“We will not talk about numbers of troops or our plans for further military activities,” Trump said. “Conditions on the ground, not arbitrary timetables, will guide our strategy from now on. America’s enemies must never know our plans or believe they can wait us out.”

While Trump has not specified how long for and how many more troops will be sent to Afghanistan, congressional officials have stated an estimate of about 4,000 more than the current 8,400 troops. 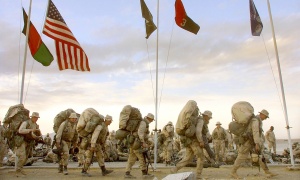 “US Marines from India company march as they prepare to depart the American military compound at Kandahar airport, Afghanistan”
Photograph: Mario Tama/Getty Images

The extra deployment has been delayed by the Pentagon pending agreement on an Afghan strategy. The additional troops are to serve in two roles: counterterrorism missions and training the Afghan forces.

He also stated that he would give military commanders the authority to act in real time and expand the authorities for US armed forces to target terrorists and criminal networks in Afghanistan.

“These killers need to know they have nowhere to hide, that no place is beyond the reach of American might and American arms,” Trump said. “Retribution will be fast and powerful.”

“America’s enemies must never know our plans or believe they can wait us out,” he added. “I will not say when we are going to attack, but attack we will.”

Trump also emphasized Pakistan’s role in his plan. The President has threatened to cut off US aid to Pakistan, in order to persuade them to help fight terrorism in Afghanistan- stating they have much to gain from partnering with the effort in Afghanistan and much to lose “by continuing to harbor criminals and terrorists.”

“We can no longer be silent about Pakistan’s safe havens for terrorist organizations, the Taliban and other groups that pose a threat to the region and beyond,” he said.

While Trump stated that Pakistan has been a valued partner, he also reiterated his beliefs that the country has sheltered ‘terrorists’ that “try every single day to kill our people. We have been paying Pakistan billions and billions of dollars at the same time they are housing the very terrorists we are fighting,” Trump said. “But that will have to change, and that will change immediately.”

Afghanistan’s ambassador to Washington, Hamdullah Mohib said Trump’s words were “exactly what we wanted” because it “takes into account our country’s needs and constraints. We did not want it to be about troop numbers or time lines, but to conditions on the ground,” he said while visiting Kabul. “We welcome this strategy that integrates American military power into achieving our shared goals.”

According to Reuters, “a spokesman for the Afghan Taliban condemned Trump’s announcement that he will keep American troops in Afghanistan with no set timetable for withdrawal.”

“Instead of continuing war in Afghanistan, Americans should have thought about withdrawing their soldiers from Afghanistan,” Taliban spokesman Zabihullah Mujahid said in a statement issued hours after Trump’s televised speech.

“As long as there is even one American soldier in our country,” the Islamist insurgents would “continue our jihad,” Mujahid said. 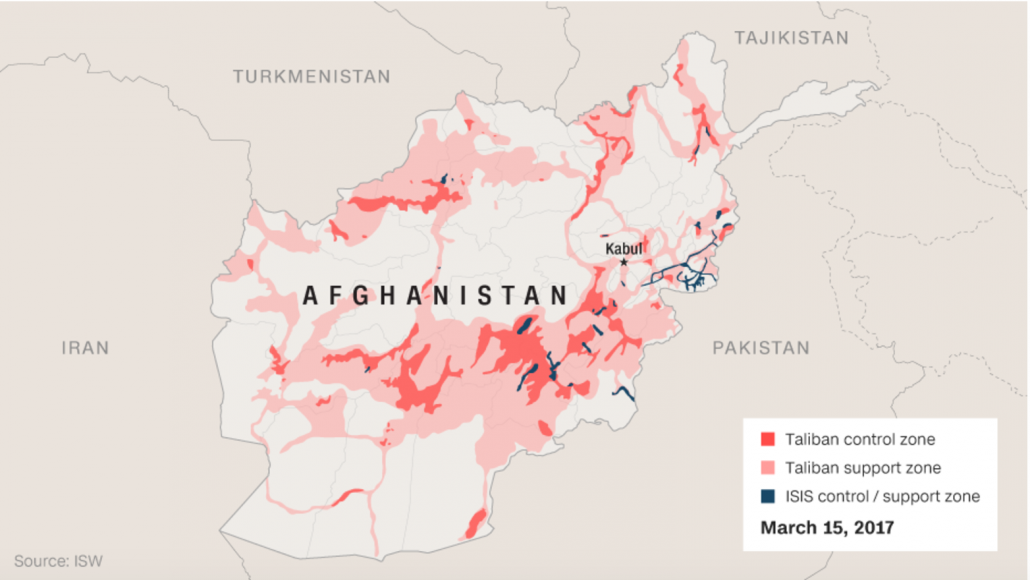 Just What Is America Doing All Over the World?

American-Muslim: No One but Myself
By Leanne Scorzoni Editor’s note:  this is the second essay that was tied for third place in the TMO Foundation…