The Purging of Islam from Uyghurs in Northwestern China 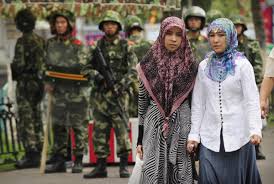 It is no secret that China has not been particularly fond of religion under the rule of the communist party with the state heavily restricting its practice in the name of “preserving public order”. In fact, this oppression is compounded when it deals with ethnic minorities who do not tow the ruling party’s anti-religious line.

This stems from the desire to quash any separatist sentiments by suppressing other factors that different ethnic minorities from the dominant Han majority including religious practice. In the case of the Northwestern region of China also known as Xinjiang or East Turkestan, China has never been particularly good towards the native Uyghur population. In recent year, the Chinese state has taken this oppression to a new level in launching an all-out war against the practice of Islam in Xinjiang.

For China, maintaining its control over the northwest is essential due to the high abundance of resources there. Consequently, they have made it a point to settle members of the dominant ethnic group, the Han, there in order to assert their dominance in the region against the native Uyghur population. Naturally, this has inspired a significant backlash against China with resistance fomenting among the Uyghur population sometimes violent other times not.

This has provided China with an excellent pretext to double-down on their oppression against an unruly people who dare to question the stranglehold the government has over their lives. What many have now observed is an all-out a campaign to purge the Uyghurs of their identity including their religion.

Despite severe restrictions on journalistic activity in Xinjiang, the world has still managed to receive reliable indications of the extent of China’s crackdown there. The oppression accelerated after 2014 when China initiated a “strike hard” policy allegedly aimed at terrorism in the region according to Human Rights Watch. To illustrate the severity of this policy, an Uyghur man was imprisoned for no more than returning to the country with a doctorate from Al-Azhar, a mainstream Islamic university. This oppression has even reached the level in which normal Islamic practices such as wearing of the headscarf or growing a beard are considered to be signs of “extremism.

There are even reports of Chinese authorities rounding up Muslims who do not consume alcoholic beverages. As if these were not draconian enough, the Chinese authorities have outdone themselves in taking their oppression to a level befitting only of the most brutal regimes of the last century.

When everyone thought that the depravity taking place in Xinjiang could go no further, China proved the world wrong with the introduction of its mass “re-education” camps. When initial reports of these camps were emerging, the Chinese naturally denied there existence; however, more recently China has acknowledge their actions but justified these on the basis of combating extremism.

Of course, this does not explain the sheer scale of these facilities with Human Rights groups such as Amnesty International estimating over 1,000,000 detained therein. This coupled with the Chinese States previous actions against the Uyghurs can only be described as an attempt to eradicate the practice of Islam from the region. The crackdown has even captured many of those outside of Uyghur ethnicity with relatives in foreign countries such as Kazakhstan reporting being cut off from their families still in China.

Should these events be allowed to unfold, Uyghurs risk the erasing of all aspects of their identity including their religion.

Without any doubt, the campaign against the Uyghur people has become one of the most severe cases of oppression in our time. This is part of a long-term hostility of the Chinese Communist Party against those they deem a threat to “public order”, especially ethnic and religious minorities. In the Xinjiang, this has severely worsened with China doing everything it can to repress the practice of Islam in the region.

Despite this, Muslim countries remain reluctant to criticize China due to seeing the country as a traditional ally sometimes even facilitating this oppression by extraditing Uyghurs studying in their country as reported by Al Jazeera.

Despite, all the challenges we face in practicing Islam in the west, we cannot claim to have endured a fraction of the oppression of our Uyghur counterparts and should support them in any way we can. Suffice it to say, the world must become more vigorous in its opposition to such oppression if there is any hope for improvement.

Netanyahu v Obama: What Next?

Advice Column: Is There a Place for Grains in a Healthy Diet?

How you can help Afghan refugees during the current crisis
by Aysha Qamar Since the withdrawal of American and NATO forces from Afghanistan in July, the Taliban has quickly taken…