Among many past activists who seek change in America, one man enveloped an astonishing multi-dimensional legacy. Some remember him through famous quotes, or as Muhammad Ali’s companion. Or, some may believe he betrayed “true” Islam. El-Hajj Malik El-Shabazz (or Malcolm X) symbolized how Islam illuminated through him.

His character, intellect, and urge to spread Islam and rid racism in America still inspires people today. He inspires people like Sheikh Omar Suleiman, who has been traveling around the US to deliver seminars purely to educate Muslims about Malcolm X.

“Malcolm provided hope to those abandoned by society. We have been deprived of a spokesperson not just for Muslims, but for the black struggle. We owe him a great deal by showing dedication to the causes he cared for,” Suleiman said in the lecture.

In the IlmNight: Malcolm X After Makkah seminars, Suleiman, founder and president of the Yaqeen Institute, spends four hours to recap Malcolm X’s life with an analysis of his post-Hajj rhetoric. Malcolm discovered what he defined as “true Islam”. The admiration Suleiman had for a key figure in history animated an audience of hundreds and four hours sped through.

The lecture I attended in Dallas was organized by the UTA Muslim Student Association. Attendees journeyed through Malcolm X’s life before and after his pilgrimage for Hajj, to the holy city of Mecca. After Hajj — unlike in 1960s America — Malcolm X witnessed a brotherhood in the East that astonished and transformed him. He devoted his life to reshape America to fight police brutality and the internal black struggle by championing blackness.

In Suleiman’s lecture, he applauded Malcolm X for his brilliance and grace. Malcolm openly criticized oppression in America. He criticized Israel for the division of the Arab world and wrote an essay on the issue before 1967. Today, we have black intellectuals who oppose Zionism like Angela Davis, Cornel West, and Alice Walker. (Davis, who was recently revoked the Fred. L. Shuttlesworth Human Rights Award because of her BDS support). The class overall demonstrated how the prominent black activists’ life of service is what should be reflected in the Muslim community concerning racism and oppression.

Racism exists in the Muslim community as it does in the broader community. A khutbah Suleiman led a few years ago on “What if Trayvon Martin Came to the Masjid?”, notes how Muslims must look deeply at their own community with a critical eye. Trayvon Martin was an unarmed 17-year-old who was shot dead by a neighborhood watch member. Suleiman stresses how important it is for Muslims to support #BlackLivesMatter and people like Trayvon Martin, regardless of whether or not they are Muslim.

Though Muslims respect Malcolm X as a symbol, little effort is put to emulate Malcolm’s passionate drive to eradicate racism in their communities. Immigrant Muslims owe a lot to black Muslims. We need to invest our time to gain knowledge on how much black Muslims contributed, and contribute, to Islam. Start by reading Malcolm X’s biography. Seek to understand him and his message. We owe at least that much to Malcolm.

Dallas and Harlem are the only places in which Martin Luther King Jr. Blvd and Malcolm X Blvd. intersect. “Under it, you see the worst poverty,” says Suleiman. “It’s a profound intersection. In Dallas, you have committed anti-police brutality work of Muslims and Christians who are very vocal in assisting greater police accountability.”

Dallas is also home to the oldest masjid in the area, Masjid Al-Islam. It was founded by Elijah Muhammad’s seventh son, Imam Warith Deen Muhammad (Wallace D. Muhammad). Imam W. D. Muhammad demobilized the Nation of Islam and geared towards Sunni Islam — deeply influenced by Malcolm X who was a close friend. Masjid Al-Islam is a living, breathing link to Malcolm X.

On a weekly basis, the inner-city masjid serves around 350 individuals comprised of unskilled laborers, the homeless, and low-income families through the Beacon of Light. The predominantly black masjid is also known for A Day of Dignity, a day out of every year dedicated to serving those in need in South Dallas.

However, the masjid is struggling to meet funds to keep it running. Recently, a fundraiser was held with a goal of $250,000 and was met with $80,000. If Suleiman’s own local masjid, Valley Ranch Islamic Center, wasn’t running its’ fundraiser the same night, he says he would have attended Masjid Al-Islam’s.

But, Suleiman says he will help make sure they reach their goal. “There is no doubt an element of neglect is in this situation. The community overall has an important heightened consciousness,” says Suleiman. “Since that night there have been multiple discussions in leadership groups on what we can do.”

Suleiman encourages young Muslims to commit anti-racism work. He says Islam has explicit scripture against racism. At Yaqeen Institute, Malcolm X Vanguards of Justice Scholarships are offered to students who contribute service to the community. Suleiman says it’s for students who have the potential to make change for justice and are inspired by Malcolm .

“One thing that I think distinguished Malcolm from everyone else was his courage. Right now there a lot of blatant evils that exist in society. We have the victimized Muslim community and other communities and we have to face them with sincerity”, says Suleiman. “His fiercelesess was so vivid and his speeches so clear. The man spoke from the heart. Even those that disagreed with him, they still loved and appreciated him.”

At the Arlington lecture hall, Suleiman invited Dallas activist Thomas Muhammad, who created a documentary on Malcolm X, to say a few words. Muhammad encouraged young Muslims in Dallas to pursue a career in politics to demolish oppression in America.

“There’s a lot of history you need to learn to grow as an American,” he said.“Don’t forget about Malcolm X’s legacy. He’s still with us, that’s your legacy as Muslims. Malcolm X left his print… a good brother. Don’t forget it.” 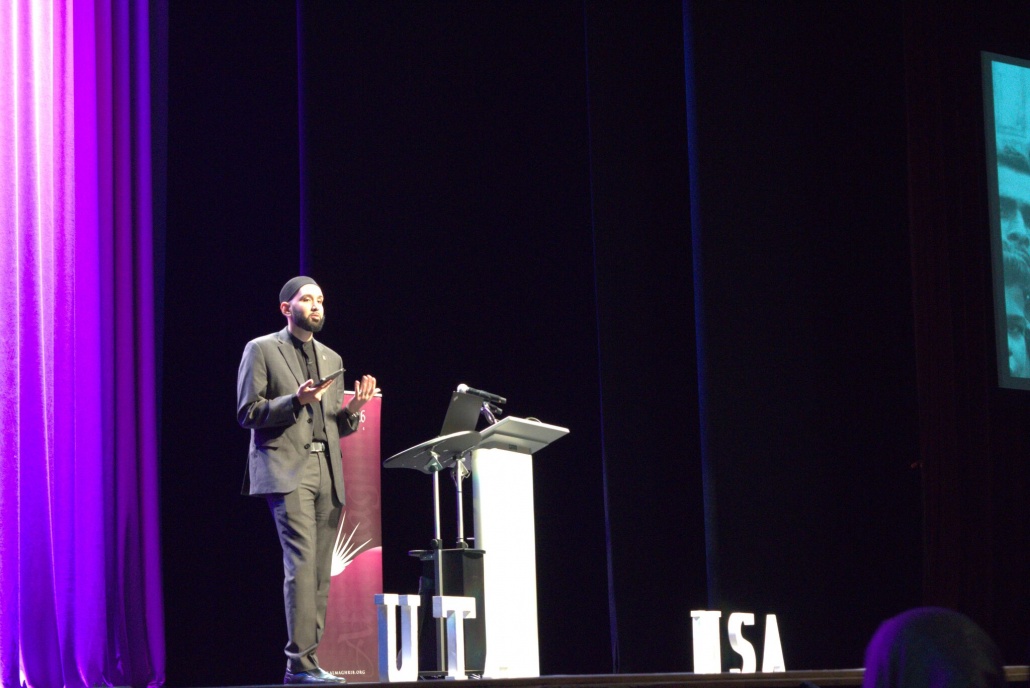