DALLAS – For Mohammed Jafri, thoughts that his hijab-wearing wife might be attacked when she is running errands by herself, either in grocery shopping alone or shuttling the kids to the park, have hijacked his personal feeling of safety forever.

“I tell her to try not to go anywhere she doesn’t need to go, and I try to go with her most places when I can,” Jafri, who lives in New Jersey, told OnIslam.net.

“What if she is attacked while I’m not there?”

Jafri said his attitude is a direct reaction to what he and other American Muslims perceive as an uptick in hostility and even violence against people who adhere to Islam. And he has good reason.

With the recent murder of three young Muslim students in Chapel Hill, North Carolina, the burning of an Islamic Center in Houston, Texas, which authorities ruled as arson, and the numerous reports of personal harassment, Muslim men and women are dealing with across the country, one could argue that Jafri’s worries are legitimate.

“Obviously there’s an increase in animosity against Muslims because of everything that’s been happening,” Jafri said, siting the rise and ongoing atrocities committed by the so-called Islamic State (ISIL) in the Middle East, the Charlie Hebdo murders in Paris, and the recent killings in Denmark at a free speech event. All of these incidents were allegedly perpetrated by Muslims.

Because of the bad news that seems to keep coming and coming, Jafri said it’s up to Muslims to make sure they and their families are safe.

“Muslims need to protect themselves,” he said. “We just want to be left alone.”

Since the 9/11 attacks, US Muslims, estimated between 6-8 million, have complained of discrimination and stereotypes in the society because of their Islamic attires or identities.

A Gallup poll also found that the majority of US Muslims are patriot and loyal to their country and are optimistic about their future.

Terri Azouak, who lives in Dallas, Texas, said she feels relatively safe. Because she doesn’t wear hijab, she’s not an obvious target.

However, she has some concern for her son, who is named Mohamed and is easily identified as a Muslim. Because of this, she said she’s felt compelled to make certain concessions recently in order to avoid any potential trouble.

“I feel safe, but I do worry at this point,” she said. “I will not attend the masjid or large gatherings with my kids right now.”

Azouak said she and her husband were recently discussing the current climate of Islamaphobia in America. She said he feels things will soon settle down and people will forget and move on, even those who are wary of Muslims. However, she said the continuing threat of the Islamic State isn’t helping the situation.

“They (ISIL) just keep on with these horrific crimes they are committing,” she said.

“I really don’t know how to feel at this point. No one in our community has shown any hatred, and I hope it stays that way.”

Tracy Lyn agreed with Azouak that she feels safe in her town of Dayton, Ohio, but pointed out that she does not cover her hair and, therefore, is not usually recognized as a Muslim. However, she said that’s not the case for everyone.

“I thought my city was safe, but I talked to one of my Saudi Arabian students who told me that he’s been harassed (very recently). He was cussed out and told to go back home,” Lyn said.

“He also said his sister gets harassed at least half the time she leaves the house.”

Despite tensions running high amongst some Muslims and those who are distrustful of Islam, Shauna Doyle of Minnesota said if there is hope of fostering understanding between Muslims and non-Muslims to avoid racism, prejudice and even violence.

She added that it is everyone’s responsibility to control their reaction to the news and to think critically about what is happening around the world.

“It seems that whatever allegiances people have immediately take over and people have these knee-jerk reactions to every bit of news before even investigating the basic details of the story,” Doyle told OnIslam.net.

“We all need to be much more mindful of this blind polarization and stop perpetuating it.”

As an example, she pointed to Facebook and other social-media postings she read in the immediate aftermath of the Chapel Hill murders of three young American Muslim students, two of whom were hijab-wearing women.

“I saw many postings calling the murderer a terrorist and demonizing the news media and the government for not recognizing him as such. This was within a day of the killings when there was very little known about the case,” Doyle said.

“Who does it help to react in this way? Certainly not the Muslim community. It does, however, help to reinforce the view that Muslims are wacko extremists.”

Doyle said Muslims in America need to be responsible in terms of how they react to world events and must work for unity instead of division.

“Hate and assumptions seriously undermine that work,” she said.

“We need to be extra vigilant about how we digest and react to all this horrible news. This is something both sides (Muslims and non-Muslims) need to work on.” 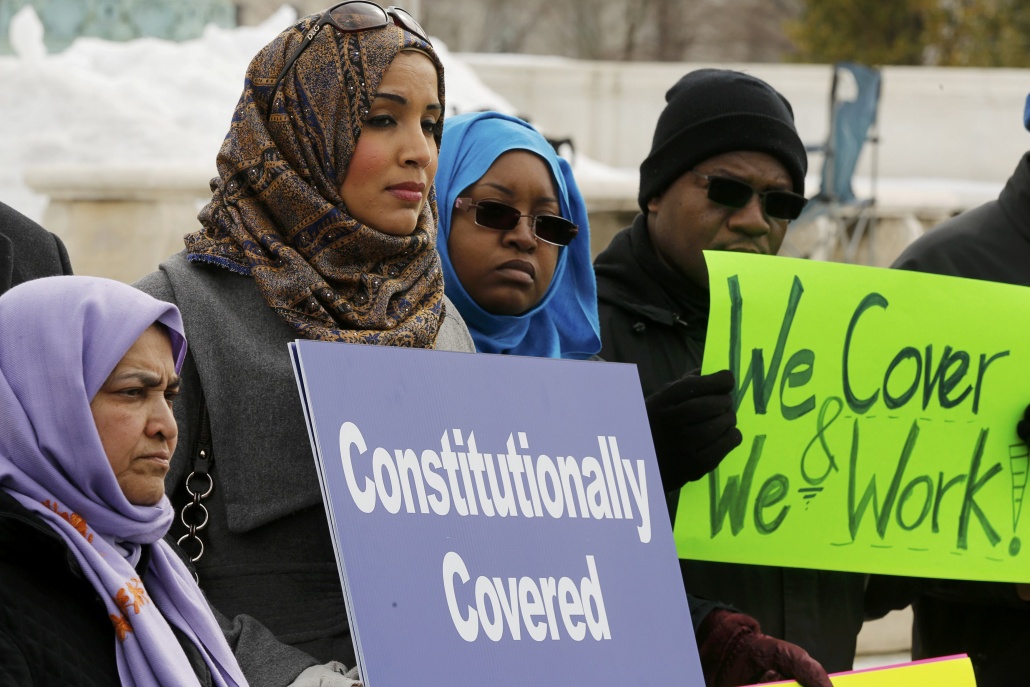 The Iran War – How It Will Begin

Jodhaa Akbar â€“ Only A Movie

© 2020 MuslimObserver.com, All Rights Reserved
Supreme Court to hear case of a headscarf that cost a Muslim teen a job