More than 700 cases of Human Immunodeficiency Virus (HIV) have been diagnosed since April in Pakistan, 576 of which are children. Experts believe that the practice of reusing infected needles at physicians’ offices, hospitals and transfusion sites are the primary cause for the outbreak.

HIV weakens the immune system by destroying cells that, under normal circumstances, combat infection and diseases. Such immunosuppressed individuals become more susceptible to other potentially fatal opportunistic infections such as herpes, pneumonia, tuberculosis, amongst many others.

Authorities have traced the epidemic’s origins to Dr. Muzaffar Ghangharo, who is alleged to use the same needle on multiple patients. Ghangharo was arrested on April 30 following a national outcry and charged with unintentional murder, Reuters reported.

Some of the parents visiting Ghangharo’s clinic in Larkana, a city in Sindh, Pakistan, wanted a second opinion when their children were not responding to care. After taking their children to see Dr. Imran Arbani at a different medical center, Arbani suggested testing for HIV as a precaution.

On April 24, the first test results came in: one child was HIV-positive. There were 14 more positive test results, according to an op-ed by the province’s deputy commissioner Muhammad Nauman Siddique published on May 20.

The children ranged in age from two months to eight-years-old. In most cases the parents of these children are not HIV-positive, authorities said. And, according to UNAIDS, the province accounts for nearly half of the 150,000 HIV-positive cases in Pakistan.

After news of the infected children broke on television, “there was panic, hue and cry,” Masood Bangash, a district police officer, told NPR.

The deputy commissioner of Larkana’s municipal government called for free screenings for anyone who was concerned. As of May 20, more than 10,000 children and adults have been screened as part of the ongoing government effort.

Parents demanded Ghangharo be screened as well, and he was also found to be HIV-positive.

I have been accused of playing the main role in spreading HIV. I am a qualified pediatrician. I had no idea I was infected. I would have taken treatment had I known I had HIV. I never felt any signs and symptoms. I am fully active,” Ghangharo said in a video filmed in jail and released on social media the day of his arrest.

“Also, why would I do this to innocent kids? What enmity do I have against these innocent children that I will infect them with HIV?

[Read Related: Heart Disease and the Toll It Takes on the South Asian Community]

Pakistan’s Ministry of Health has requested an emergency visit from the World Health Organization (WHO) to help curb the outbreak and provide expertise to manage the existing cases.

According to NPR, the CEO of the Sindh Health Care Commission Dr. Minhaj Kidwai, an independent government-funded group, believes the outbreak is a result of “contaminated syringes, syringes that are reused for injections in children, unscreened blood transfusions and reuse of dextrose and saline drips.”

In all of Sindh province, Kidwai told NPR, investigators have identified some 500 clinics, labs and blood banks with unsafe practices or evidence of quackery in the past three weeks. In Larkana alone, 147 facilities have been “sealed” or shut down pending further investigation.

The Pakistani government is committed to fighting this outbreak and has ordered 50,000 HIV screening kits and allocated resources to provide the appropriate antivirals and medications for treating the HIV-positive individuals. Blood from several blood banks that are suspected of conducting unsanitary transfusion practices have also been recalled to deter the further spread of the disease.

The investigation is ongoing as authorities try to determine whether the outbreak was the result of unsafe practices in the doctor’s clinic and other clinics in the region.

This post was originally published on Brown Girl Magazine.com 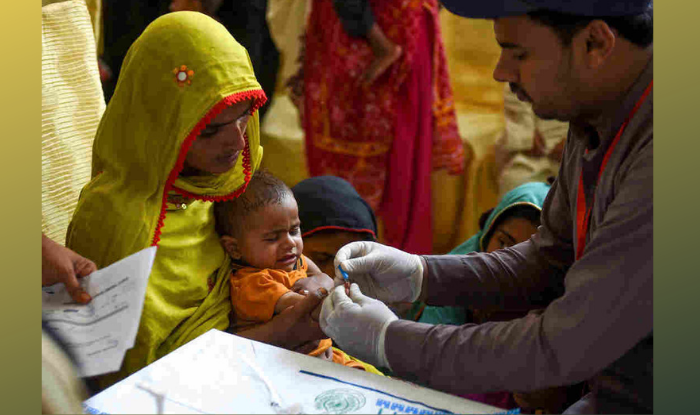 Facts: Israel / Palestine
By Robert Barsocchini How the Western media sees the brutality. Gaza (along with the West Bank and East Jerusalem) is…

Musings–Surely it is the Heart

© 2020 MuslimObserver.com, All Rights Reserved
16 Charged in Bangladesh for Fatal-Burning of Nusrat Jahan Rafi

Is There Any Way to Protect Ourselves From Evil Eye?
Scroll to top