Historic Masjid Wali Muhammad, the Muslim Center Mosque and Community Center, and Dar Al-Rahma are three West Detroit institutions that have expanded their efforts to provide nourishing meals and essential pantry items to their neighbors and the wider community in recent months. COVID-19 has escalated needs, prompting these centers to intensify their longer- running services or introduce new initiatives. These three primarily African-American centers stand out for their rigorous efforts among the many Detroit-area Muslim institutions whose generosity and ingenuity have risen to meet the health, economic, and safety challenges introduced by COVID-19.

On May 25, community leader Zarinah El-Amin stopped her car in front of Historic Masjid Wali Muhammad (HMWM) on Linwood Street with the camera rolling for her popular live Facebook feed. Her camera scanned over several men from a nearby urban farm in safety masks and gloves preparing to distribute dozens of boxes labeled “Eastern Market—Healthier, Wealthier, Happier Detroit.”  Inside the boxes were assorted fruits and vegetables, including mushrooms, onions, asparagus, potatoes, apples, and more. Started in 2009, C.R.I.T.E.R.I.O.N Urban Farms (Community Resources Institute to Empower Residents in Our Neighborhood) is an agricultural, community redevelopment, and revitalization initiative located about half a mile away from its base institution HMWM. C.R.I.T.E.R.I.O.N.’s co-founder and president, and long-time HMWM member Na‘im Muslim Sabir explained that the urban farm is now engaged in a ten-week program to source fresh produce and offer it to the community each Monday afternoon.

Sabir, who had a long career as a restauranteur, grew up on a family farm in Pennsylvania. He brings skills from both experiences to the farm. Although the items provided in this season’s boxes are from Eastern Market, Sabir intends for C.R.I.T.E.R.I.O.N. soon to be able to provide similar produce for the community. Started in 2009 and stretching over 21 contiguous lots, C.R.I.T.E.R.I.O.N. is progressing toward housing a high output urban farm; a center that provides education about agriculture to youth and adults; and a place where community members can hone marketable skills related to farming and food preparation.

Another C.R.I.T.E.R.I.O.N. co-founder and long-term HMWM member, Omar AbdulKhaaliq, brings his years of expertise as a carpenter to the urban farm. Abdul Khaaliq explained that C.R.I.T.E.R.I.O.N. is currently working to restore a large house on Monterey Street at the center of the farmland. Project volunteers will add a commercial kitchen and other community amenities to the structure. According to AbdulKhaaliq: “Our leader, Warith Deen Muhammad, put emphasis on doing work that attracts people to Allah because it reflects Islamic ideals and values of good character.  And he also asked us to build up our community life on the pattern of Medina, as it was established by the Prophet Muhammad, peace be upon him and his companions.” This message holds resonance – people from across the country have been sending their donations to advance the urban farm. 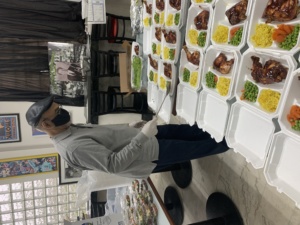 The C.R.I.T.E.R.I.O.N. initiative is just one of many ways that HMWM supports the community. Founded in 1930, HMWM moved to its present location in 1959. It is one of the area’s oldest mosques and highly distinguished for its community service. HMWM offers hot, freshly prepared meals each Saturday at its soup kitchen and a food pantry twice each month, in cooperation with the Detroit Muslim Mission/ Community Services Community Development Corporation. Since 2008, Mitchell Shamsud-Din, Executive Director of the Detroit Muslim Mission a long time HMWM member explained that in recent months, the hot meals have been prepared off-site and offered via drive-up distribution in response to COVID-19 safety concerns.

HMWM is known as the “Mother Mosque” by some area institutions due to the way it has led by example and how its members have fostered efforts in other mosques. For example, HMWM members helped establish and organize the long-running Saturday soup kitchen at the Muslim Center Mosque and Community Center on Davison Freeway, about 1.5 miles northeast from HMWM. The Muslim Center soup kitchen staff and volunteers intensified and expanded their efforts during COVID-19, especially during Ramadan 2020, to safely meet community needs. In addition to re-structuring the ongoing Saturday soup kitchen and food pantry into a drive-by pick up, the Muslim Center offered hot meals to their neighbors and the wider community every night during Ramadan and distributed this food to the sick and shut-in. Muslim Center Board Chairman Moussa Niang elaborated:

“In future years, one thing that will be remembered about COVID-19 is how people spent their time, and where organizations stood to help. The Muslim Center board knows that one of the most important things is relief action for people who need food, particularly people who can’t leave their homes. One thing we have done is to offer food boxes and hot meals at the mosque, and also to distribute them to people who can’t make it to the mosque. During this past Ramadan, we provided over 1,000 meals per week to families in need.”

On Southfield Freeway, about 8 miles away from the Muslim Center and HMWM, Dar Al-Rahma (DAR), is following in the footsteps of these older institutions. Established in 2018, DAR devotes itself to community service and empowerment as part of its mission to educate about Islam. DAR leader Shaykh Abdulkarim Yayha explained:

“Among the first pieces of advice that the Prophet gave in al-Medina was to spread peace, share food, and pray by night. Spreading peace includes making people safe. Detroit has a large low income population, and many of those people lack transportation. If there were—and there is—another mosque a mile from here—having food be distributed at both places still would be relevant. Somebody walking a block or two versus a mile or two, or not having to take the bus from across town, is dramatically different for someone who is struggling.”

During this past Ramadan, DAR began distributing food to its neighbors. This included Ramadan dinners several nights per week. It also included the distribution of food boxes, which is continuing into the year. Shaykh Yayha explained that one of the blessings of COVID-19 is that it served as a catalyst for DAR to bring its long-desired dream to provision the neighborhood and community with food into fruition more quickly than might have been otherwise. Jabril Abdul-Nur Ahmad, a young community activist with DAR who initiated and manages key aspects of the food distribution program, explained: “Food is the universal need that everyone has, and it isn’t always met. So if we’re going to be in this neighborhood and in this area, we should be working to provide some source of goodness, some source of sustenance, for the people that we serve.” 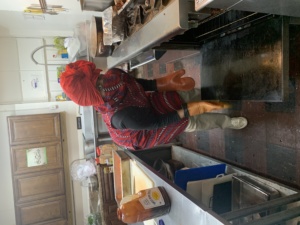 During Ramadan, DAR’s curbside dinners were prepared by rising culinary star Khalipha Kane, owner of Khalipha’s Katering. Several times each week, Khalipha provided mouthwatering halal southern specialties based on the recipes of her Alabama-born grandmother Mrs. Mary Williams. Khalipha’s offerings bring novel flavors and traditions to Detroit’s halal food scene. Khalipha, who is a member of the Sister’s Service Committee at DAR, prepared items like barbeque chicken, mac and cheese, and green beans for families in the DAR neighborhood, and for other community members. Khalipha prepared about 250 meals every night that she cooked. She explained: “Every time I cook, I make dua [prayers] over the food and I say, “Oh Allah please allow this food to be nourishment for whoever partakes in it, and allow it to be the best taste that they have experienced.”

Khalipha’s prayer captures the spirit of giving that is sweeping through Detroit’s Muslim communities. Detroit Muslims are not only giving, but they are bringing their best.  The challenges of COVID-19 are raising the energy of an already generous community to new heights. Based on the sentiments of these inspired community leaders, there is no sign of stopping. For more information about or to support any of the giving programs mentioned in the article, please visit www.criterionurbanfarm.org;  www.historicmwm.com; www.muslimcenterdetroit.com; www.daralrahma.org; http://www.detroitmuslimmission.com/ 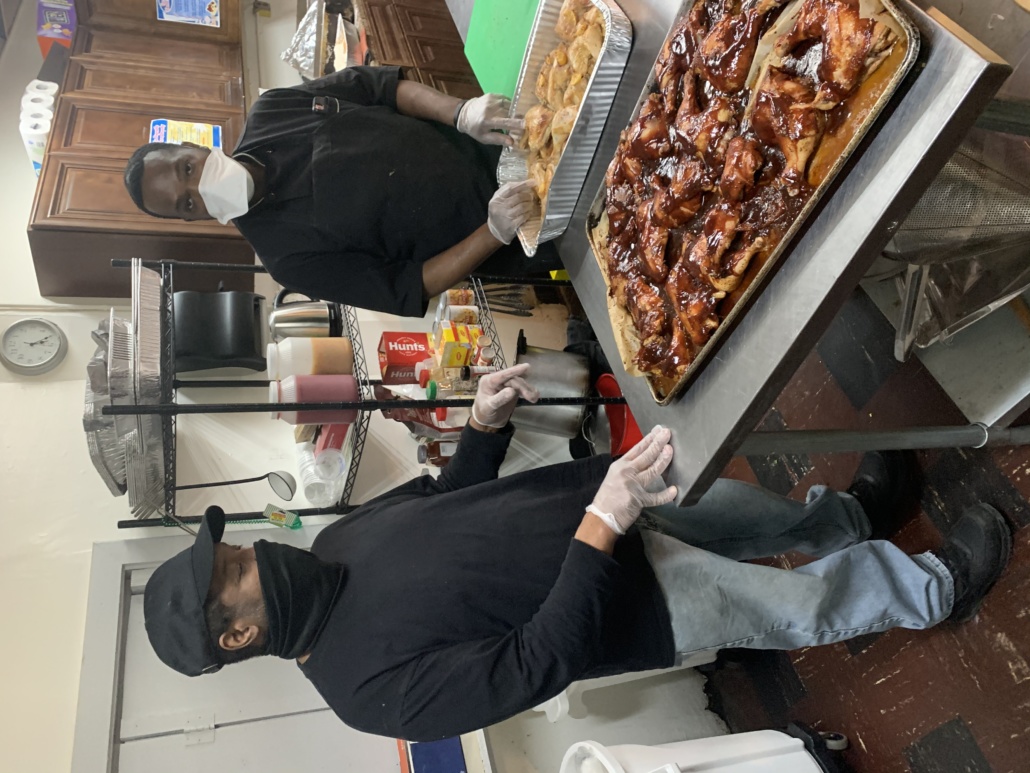 The Worst Act of Domestic Terrorism in US History
by Dr. Aslam Abdullah It was a peaceful night in Las Vegas. The strip- the mile long road that has…

Egypt in Quandary as Gaza Raids Divide the Muslim World

© 2020 MuslimObserver.com, All Rights Reserved
Hagia Sophia: Is the Decision in line with Divine Guidance?