Nepalis take part in a candlelight vigil, a month after the April 25 earthquake in Kathmandu, Nepal May 25, 2015. Navesh Chitrakar / Reuters

The death toll in Nepal has surpassed 8,500, Reuters reported this week, making it the country’s deadliest earthquake on record. In the aftermath of the disaster, aid has come in many forms, although not nearly enough. As Cathleen Falsani reported here in RD, faith groups of all kinds were quick to arrive in the devastated capital.

But do religious groups engage seamlessly in humanitarianism in these contexts?
In the direct aftermath of the quake, for example, the Hindu American Foundation sent out an email encouraging individuals seeking to support relief efforts to channel their donations to Hindu charities in particular.

These organizations, the group claimed, are motivated by a Hindu sense of seva, or “selfless service for the benefit of all.” Other faith-based groups, in contrast, are “not always selfless,” having “ulterior motives, including evangelizing and church-planting,” the email argued.

Faith-based giving is widely accepted today as important aspect of the international community’s response to emergencies. Less understood, however, is the role that intra- and inter-religious dynamics play in our desires to help. While the impulse to give may be moved by a purity of intention, it is important to understand the ways that religion itself becomes entangled in these places of intervention.

In many parts of South Asia, controversy over religious conversion has intensified in recent decades, particularly as a result of the rise of Pentecostal-charismatic Christianity and new forms of evangelism. Christian charitable groups increasingly are viewed with suspicion as carrying proselytizing intentions. The statement by the diaspora-based Hindu American Foundation is grounded in these sub-continental concerns.

In studying Buddhist NGOs doing relief work after the Tsunami and the civil war in Sri Lanka, I found Buddhist groups mobilizing in “competitive philanthropy,” as I called it in my dissertation. These groups delivered medical, educational and welfare development programs to the rural poor in predominantly Buddhist areas that they saw as targeted by proselytism.

Similar competitive philanthropic impulses could be said to be shaping the Hindu American Foundation’s worldwide humanitarian appeal to aid Nepalese victims. I don’t mean to suggest that the impulse to do good here is purely self-serving. Still, this example of competitive philanthropy highlights the power of existing religious tensions and ties to shape religiously inspired humanitarian giving in the wake of a disaster.

These forces influence not only charitable institutions, but also bilateral aid between governments. Take, for instance, the swift response of the government of Sri Lanka to pledge medical aid assistance, military personnel and engineers to Nepal. Although Sri Lanka is most often on the receiving end of international humanitarian assistance, it stepped up to be one of the first three countries to send relief to Nepal, deploying military troops outside of its sovereign territory for the first time in Sri Lanka’s history.

The gesture could easily be chalked up to a diplomatic gesture from one small South Asian nation to another, but the humanitarian gesture is rooted in the long-running transcultural exchange between Sri Lanka and Nepal as major historical sites of Buddhism.

“It is indeed our duty to help Nepal in this crisis,” a prominent Buddhist clergyman said. “It is a Hindu state with a considerable number of Buddhists living there. It is the place where the Bodhisattva Siddhartha was born.”

The Sri Lankan prime minster reiterated those sentiments when he spoke to his parliament after the disaster. Because Sri Lanka is the center of the Theravada Buddhism, he said, it is the country’s responsibility to aid the birthplace of the Buddha.

During the early 20th century, Sri Lankan Buddhist reformers advocated for establishing Bodhigaya in India and Lumbini in Nepal as the Buddhist holy lands. As the birthplace of Gautama Buddha, Lumbini draws millions of pilgrims from around the world. Although none of the major holy sites in Lumbini were affected by the disaster, Sri Lanka’s generosity to Nepal could be understood as a means for Sri Lankan Buddhists to reasserts their own identity as the custodians and caregivers of the imagined Theravada Buddhist community.

Religious communities have had a long history of responding to people in need and in a world of catastrophe, both man-made and natural, they play a critical role. Still, even the purest faith-inspired impulse to give cannot escape the religious dynamics of the landscape in which they intervene. 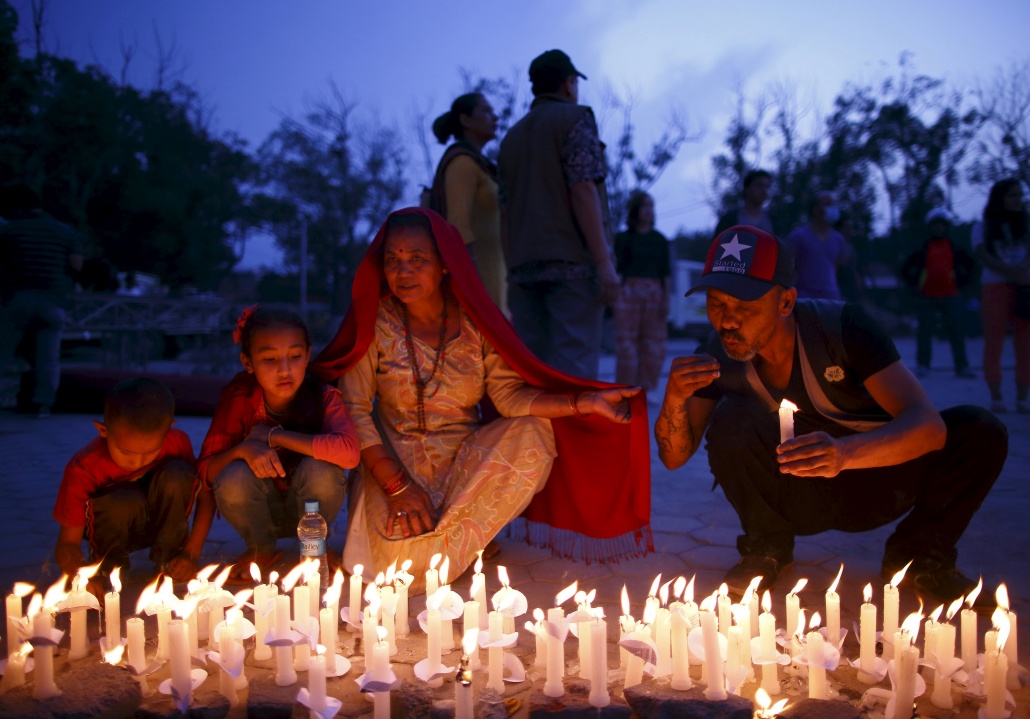