By Patrick Allitt, The American Conservative

Is it true that the Bible teaches peace and the Koran war? Only if you approach the books selectively, taking the gentlest of Jesusâ€™ (as) teachings and setting them against the harshest of Muhammadâ€™s (s). Philip Jenkinsâ€™s challenging new book Laying Down the Sword shows that the Bible contains incitements not just to violence but also to genocide. He argues that Christians and Jews should struggle to make sense of these violent texts as a central element of their tradition, rather than hurry past them or ignore them altogether.

The most painful passages come in the books of Joshua and Judges, which Jenkins describes as an â€œorgy of militarism, enslavement, and race war.â€ The Israelites, emerging from the desert after their escape from Egypt, attack Canaanite cities, whose people are described by the biblical narrator as very wicked. God commands the Israelites to exterminate the inhabitants – men, women, children, and animals alike, until nothing is left alive. Likewise in the Book of Samuel, King Saul eventually loses Godâ€™s favor not for his bloodthirstiness in war but for his restraint – he fails to annihilate his enemies. The prophet Samuel denounces him for sparing some of the Amalekites, takes up a sword, and personally hacks the captive King Agag to pieces. To make matters worse, says Jenkins, God sometimes deliberately â€œhardens the heartsâ€ of other peoples, using them to chastise the sinful Hebrews.

Then He raises up Judges, righteous Israelites, to smite and destroy them in turn. Itâ€™s almost as if He wanted the highest possible body count.

Jenkins offers a useful thought experiment, asking readers to view these stories through the eyes of the Canaanites themselves. To them, the Israelites would seem as terrifying as the Janjaweed militia of Darfur in our own day, or as the Lordâ€™s Resistance Army of Uganda, whose leader, Joseph Kony, has justified the mass torture and killing of men, women, and children in Godâ€™s name.

For centuries Jews and Christians have struggled to come to terms with these stories. One option was always to take them at face value and act accordingly. Crusaders in the Middle Ages, militant Christians on both sides during the wars of religion that followed the Reformation, and extremist Zionists in Israel today have taken the stories as evidence that killing your enemy without mercy is exactly what God wants.

Sometimes, in their view, we must accept that Godâ€™s purposes are inscrutable but nevertheless just and righteous.

Similarly, the genocidal passages settled the consciences of European empire-builders between 1500 and 1900. They attributed â€œCanaaniteâ€ wickedness to their American, African, and Asian enemies, then exterminated them, noting that in doing so they had emulated Godâ€™s chosen conqueror, Joshua. One of the difficulties of becoming Christian for Native Americans and Africans since then has been Godâ€™s apparent willingness to victimize people like themselves en masse.

Another common approach has been to overlook or exclude these genocidal texts. In the Revised Common Lectionary, published in 1994 and now used by a wide array of Protestant and Catholic churches in America, the biblical readings recommended for every Sunday of the year carefully omit all the warlike texts while emphasizing the most benevolent themes in the Old Testament that prefigure Jesusâ€™ message of peace, love, and social justice. â€œModern preachers,â€ notes Jenkins, â€œregularly proclaim the confrontational and challenging character of the Old Testament, by which they mean the social radicalism of Amos, or the withering critiques of war and injustice in prophets such as Isaiah and Jeremiah.

Yet few indeed are the sermons that explore the injunction to leave nothing that breathes, or condemn those who fail to kill the last victim.â€ He speculates about what would happen if a typical suburban minister were compelled, one Sunday, to preach on the text from Deuteronomy 7: â€œYou must destroy them totally. Make no treaty with them, and show them no mercy.â€

Early figures in Christian history approached the genocidal passages in different ways. Marcion, leader of a highly influential Christian movement of the second century AD, argued that the God of the Old Testament, capricious, brutal, and violent, was the antithesis of the God of Jesus in the New Testament. His own proposed version of the Bible omitted the Old Testament completely. So, a century later, did that of Mani, founder of the Manicheans, who thought of divine history as a great battle between light and darkness and denied that the New Testament fulfilled prophecies made in the Old.
Arguing against the Marcionites and the Manicheans, some of the Church Fathers, including Origen and Augustine, denied that the genocidal passages should be taken literally. In Origenâ€™s view they should be read metaphorically or spiritually so that the Canaanites or Amalekites were not actual groups of people, deserving of death, but the tendency to sin in every human heart, against which we should make perpetual war. At one point in the book of Joshua, for example, five kings hide in a cave until the Israelites find and kill them. To Origen this story meant not that the Israelites were murderers but that the five senses (sight, touch, hearing, smell, and taste) are always at work in the â€œcaveâ€ of the human mind, always offering temptation, but that a truly religious man, with the help of Jesus, will overcome them.

Not until the Enlightenment did significant numbers of European intellectuals begin to use the genocidal passages to argue against religion itself. Some, like Thomas Paine, author of Common Sense and a hero of the American Revolution, regarded the God disclosed by these passages as so morally inferior that no civilized people should accept him. In The Age of Reason he described the Old Testament as â€œa history of wickedness that has served to corrupt and brutalize mankind.â€ Paine became a radiant figure for skeptics through the 19th and 20th centuries. His most recent heirs include our own eraâ€™s leading atheists, Christopher Hitchens and Richard Dawkins.

Scholars of historical criticism offered yet another approach to the Bible. Starting in Germany and gradually coming to dominate the academic study of scripture, they recognized that the canonical books of the Old Testament were written in different times and places by different authors with different intentions. By now, biblical scholars are largely in agreement about the existence of four main traditions woven together in the Old Testament: the Yahwistic, the Elohistic, the Priestly, and the Deuteronomic. They have also shown that the familiar order of the Old Testament books is not the order in which they were written. On the contrary, Joshua and Deuteronomy, whose historical passages deal with events in about the 12th century BC, were almost certainly written 500 or 600 years later, at about the same time as the prophets Isaiah, Ezekiel, and Amos, whose peaceful and universalistic message appears to contradict them. In other words, the genocidal actions were attributed by much later writers, to men who had lived as remote from them in time as Christopher Columbus is from us.

Jenkins believes that these much later writers attributed to Joshua actions that never happened. Their motive was to exhort their own contemporaries to live up to the rigors of monotheism and not to let their attention be drawn away by the multitude of other gods, from the surrounding empires and societies, competing for their loyalty. He admits that praising their forefathers for genocide implies that they were familiar with the concept, but takes consolation from the fact that the pitiless massacres in question almost certainly did not take place.

Scholarly evidence now supports the idea that the Hebrews coexisted with many other peoples in the Canaan of the 12th century B.C.

Archaeologists in particular cast doubt on the claim that a new group of marauders came out of the desert and annihilated pre-existing cities and peoples; the evidence of such massacres simply is not there. What really happened, Jenkins argues, is that the Deuteronomic writers, concerned about dangerous political and religious conditions, were â€œtelling a story and at every possible stage heightening the degree of contrast and separation between Israel and those other nations,â€ not for the sake of historical accuracy but to send a spiritual message to their own people. â€œIsrael had to kill its inner Canaanite,â€ so â€œperhaps the later commentators, Jewish and Christian, were not that misguided in seeing the massacres in allegorical terms.â€

What does all this imply for practicing Christians today? In Jenkinsâ€™ view, ministers and worshipers should face up to the genocidal texts because they are an integral part of the Bible, whose Old and New Testaments, he believes, depend on one another. He invokes the authority of Martin Luther, who reminded the excitable first generation of Protestant Bible readers not to take any passage out of context, always to think of the overall meaning of a book, and to be attentive to the setting and specifics of a passage. Deuteronomy 7, for example, can then be understood not as a claim that itâ€™s right for Christians to massacre their enemies but as â€œa call to absolute dedication.â€ If we continue to ignore or deny these texts rather than face up to them in their proper context, we will be taken by surprise when another fanatic uses them to justify murder.

Thatâ€™s asking a lot of ordinary Christians because only sustained study in the historical-critical method can lead them to understand and share his conclusions. Jenkins must know heâ€™s aiming far higher than most congregations are willing to stretch. As I reached the last chapter of Laying Down the Sword, I had mixed feelings. On the one hand this book is a wonderful example of the kind of rigorous work Christians must do if they are to retain intellectual credibility – Jenkins is doing just what Mark Noll asked for in his 1995 manifesto The Scandal of the Evangelical Mind. Heâ€™s also right to show the unreasonableness of thinking that Islam is essentially a religion of violence and war and Christianity a religion of peace. On the other hand itâ€™s hard to escape the feeling that he is making excuses for the biblical authors. Perhaps it is true that they used the language of genocide only figuratively, but in doing so they gave warrants to people who not only committed actual genocide but claimed Godâ€™s blessing for it into the bargain.

Let me end with another paradox about which I would have liked to hear Jenkinsâ€™s thoughts. He encourages us to look at historical events from the vantage point of the weaker party, and he tells us that we need to reincorporate the genocidal passages into our understanding and worship. That got me thinking about another biblical genocide – Noahâ€™s flood. We are all familiar with pictures of the animals lining up two-by-two and parading into the ark; these plucky survivors have become a staple subject for greeting-card artists, songwriters, cartoonists, even environmentalists. What we are not used to thinking about is the fact that God Himself in this story is committing genocide, killing everyone in the world except for the members of a single family. Itâ€™s a horrifying tale but one that our culture treats as colorful and uplifting, a prelude to the first rainbow. Iâ€™ve never heard a sermon on it as an act of divine rage and apocalyptic destruction. Perhaps that just confirms Jenkinsâ€™ general point that we should be a lot more self-aware and self-critical when we think about our religion and a lot slower to condemn the violent tendencies in the religions of others.

Patrick Allitt is a professor of history at Emory University and author of The Conservatives: Ideas and Personalities Throughout American History and Catholic Intellectuals and Conservative Politics in America, 1950-1985 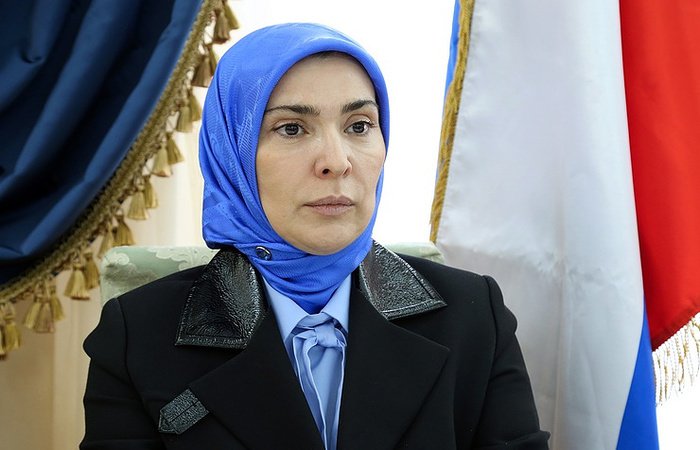