I sat in my office on a Friday afternoon, a weekend away from the start of trial.  Jury selection would commence Monday.  I took a few moments to ensure I possessed the entire discovery, completed our investigation and identified the issues and a game plan.  I gathered shirts and slacks for my client and dropped them off at the jail; he would be dressed formally for trial rather than in his county issued garb.  I then composed a mental list of the suits, shirts and ties I’d wear, honing in on a few ensembles that would be reserved for specific days: jury voir dire, opening statement, cross examination of the prosecution’s main witness. My favorite suit, a speckled charcoal gray 3-piece, saved for the grand finale: closing argument.

I glanced down at my black oxford shoes and spotted several scuff marks. I should shine them before trial, I thought.  Later that evening, I rummaged my bedroom for my shoe polish. I stopped. As I stared at the abrasions of my shoes, they spoke tales of where the shoes had taken me in the representation of this client.  The blemishes didn’t need repair; they needed their stories told.

The scratches captured the journey to the Elmwood Correctional Facility in Milpitas to meet my client for the first time.  They marked the steps through the meandering paths of the jail to see him, walking through security doors and flashing my visitor badge to correctional officers for passage.  The scrapes detailed the stroll back to my car that afternoon, internalizing, processing and pondering upon my client’s background, perspectives of the charges and desired outcome of the case.  They symbolized my various return visits to see the young man, updating him on the latest discovery and the status of our investigation.

The spots chronicled my trek from my office to the Santa Clara County Hall of Justice to negotiate for my client. They narrated the journey up the elevator, through the courtroom and into the holding cell where my client and I chatted before I ventured back to discuss the case with the deputy district attorney and the judge in his chambers.  They detailed the steps back into the holding cell to convey the offers and options to my client for his ultimate decision.  No deal.

The scuffs signified my traverse back to court for motions in limine, armed with arguments and written motions to convince the judge to make favorable evidentiary rulings for my client. They connoted the minutes standing in debate, battling against the DA, winning and losing arguments in the significant, but often overlooked, effort to exclude prejudicial evidence from the jury’s purview.

The trial began, and four weeks later, it ended.  The scuff marks on my shoes are joined by fresh smudges.  The new scars depict my daily walks to court, grappling with the butterflies in my belly, visualizing the courtroom and rehearsing my arguments and questions.  They illustrate my standing before the jury panel to question and select the prospective jurors who would determine my client’s fate.  The new discoloration of my shoes recount my opening statement, carefully crafted to relate to the jury the favorable evidence expected during the trial.  They embody my saunter around the courtroom as I cross-examined and confronted the prosecution witnesses, utilizing, but not sticking to, a meticulously prepared script for each witness.

The newly minted shoe stains recount the daily walks back from court, clothes no longer pristine, feet heavy, body worn, mentally and physically exhausted after a day in the trenches fighting against the weight of the government crushing my client.  They represent the hour on my feet delivering my closing argument to the jury, practiced and rehearsed several times the night before, hoping to foster and sustain reasonable doubts in their minds.

The scuffs represent the ominous walk to receive the jury verdict, a march to the guillotine, spent second guessing myself about missed arguments and unasked questions, anguishing at the thought of hearing “guilty,” and agonizing at what punishment may lay ahead for my client.  The scars of my shoes signify the guilty verdict read by the jury foreperson after four days of deliberations.   They expose the grueling walk back to my office, one of pain and sorrow after witnessing my client branded a felon, found guilty despite my best efforts.

I won’t shine the shoes.  The path that public defenders choose to walk every day can be wearisome, as the blemishes on these shoes reveal.  They tell stories of the proud steps I take in the representation of my clients, this client.  These scars will accompany, inform and inspire me as I walk that path again for the next one.

Sajid A. Khan is a Public Defender in San Jose, CA. He has a BA in Political Science from UC Berkeley and a law degree from UC Hastings. When not advocating for justice, Sajid enjoys playing basketball, football and baseball, and is a huge fan of Cal football and A’s baseball. He lives in San Jose, Ca with his wife and son. Reach him via email at sajid.ahmed.khan@gmail.com or Twitter @thesajidakhan.The views expressed here are his own. 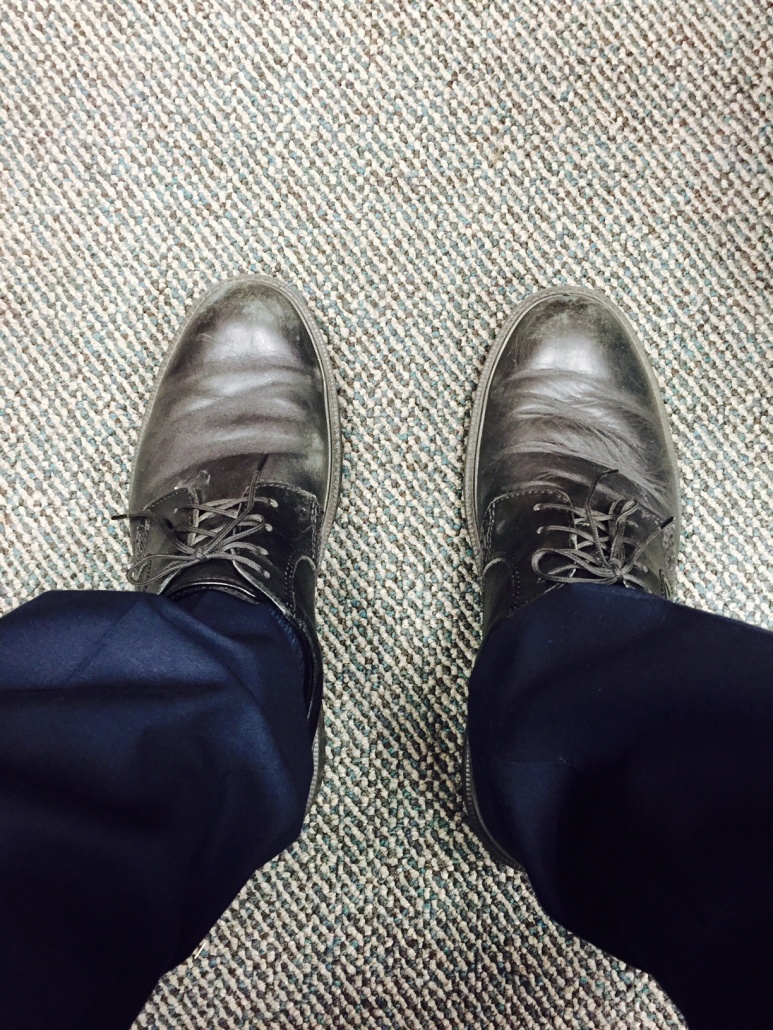 The Psychological Implosion of Our Soldiers