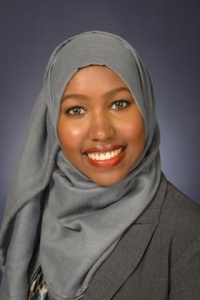 Fatima Noor, a Somalian refugee, was was sworn in as special assistant to the Director of U.S. Citizenship and Immigration Services (USCIS) in 2014. When hearing her story in her own words, one would see the beauty in being hired into such a position:

“I was born in Somalia, but mostly what I remember are flashes of a carefree child, happily unaware of the world beyond the Utanga Refugee Camp in Kenya. About half a mile from ourUNHCR-issued blue tent was the fence that surrounded the camp. Beyond the fence was an endless blue horizon of ocean.

But soon, due to a combination of wildfires and overpopulation, our camp was ordered to shut down. My family, like many others, faced tough decisions. One was whether to return to Somalia in the height of civil war. Another was whether to send their small child — me — to live with a relative in a far-off land in hopes of better opportunities.

On our last day at the camp, I watched my parents and brother sail off in one of the colorful boats shuttling the many faces — men, women, and children — who once inhabited this camp, back to Somalia.

In the early 2000s, my father made his way out of Somalia, alone. He came to the United States as a refugee. He lived in Texas, but driving trucks gave him the opportunity to explore America’s frontiers: from the snowy Northwest to the humid Southeast. He decided to settle in the latter, and started the paperwork to bring my mother and brothers from Somalia and me from Denmark.
In 2005, my whole family reunited in our new home: Memphis, Tennessee. We soon adapted to Southern living (and yummy Memphis barbecue). We bought a house down by the Mississippi River. My brother even attended the same middle school as Elvis Presley. I graduated from the University of Memphis.”

As of June 2015, it appears that Noor has moved on and is now described as a Policy Analyst for Immigration and Rural Affairs. As a community, we are proud of Noor’s courage and can’t wait to see where she will go next.