The family of 3-year-old Aziz Ahmed and community members held a vigil on March 28 in remembrance of the toddler, following his tragic death. Ahmed was mauled to death by two dogs in his backyard on March 16, when two unregistered dogs broke into his backyard and attacked him and his mother, ABC News reported. It was the first time the child was playing in the family’s new backyard.

According to NBC News, Ahmed was playing outside with his brothers when two dogs came through the fence and attacked them. While his mother was able to get the other children to run inside, Ahmed was too young to understand the situation. When the dogs came toward him, his mother threw herself on top of him in an attempt to protect him. After the attack, the mother, Shabana Mohammed, was hospitalized and survived the incident, but Ahmed died of his injuries after being transported by emergency medical care.

According to a Change.org petition, the mother was released from the hospital on Thursday but will need plastic surgery. Sunday’s vigil was the first time the family visited the home since the incident, a family friend told media representatives at the vigil.

The family is now looking to lawmakers to pass “Aziz’s law” a law that would allow for the criminal prosecution of owners whose dogs cause fatal injury. “We don’t want any family to [go through] that. We don’t want that,” Ahmed’s father, Tanveer Ahmed told reporters Sunday evening.

According to authorities while the two dogs, both pitbulls, have been euthanized, the owners will face no charges. County prosecutors announced that charges will not bring brought against the owner of the two pit bulls, a report said Tuesday. The decision not to levy charges was revealed in a letter written by Middlesex County Prosecutor Yolanda Ciccone, obtained by NJ.com.

“In this case, based upon the information known at this time, it would appear as if no law has been violated,” Ciccone wrote. “Thus, despite the well-intended demands for justice, no charges will presently be filed.” Ciccone added that there was no evidence of the dog owner having “intentional, knowing, or reckless criminal conduct.”

The state of New Jersey currently has no specific charge for dog attacks, making criminally prosecuting dog owners difficult, NJ.com reported. Despite prosecutors noting that the dogs were obtained without a license, because they were not violent in the past, community complaints and this incident did not influence decisions to prosecute the owners.

“If there is no law, we will fight to make a law … It’s unfair,” Oma Morgan, a coworker of Tanveer Ahmed’s and a co-organizer of a GoFundMe for the family, told NJ Advance Media. “They hold people accountable for jaywalking or letting a dog poop on your front lawn … that doesn’t cost someone their life.”

“He was murdered by those dogs, and the owners should be held liable,” Morgan said. She added that the law does not have the intention of banning pit bulls but instead hopes to hold owners responsible for their dog’s violent actions. “I’m not saying it’s the pit bulls’ fault, it’s the owners fault– whether they saved them, beat them whatever they did to train them, and Aziz paid the price,” Oma said.

According to my central jersey, this is not the first time the unregistered dogs have gotten out of their yard. A borough spokesman said that the dogs, who belonged to a man identified as Santos Rodriguez, had been reportedly loose on Oct. 23, before the Ahmed family moved to the neighborhood. At that time, police recovered the dogs and they were picked up by the owner. If action had been taken then in regards to the dogs being unregistered this incident may not have occurred. Local reports indicate that Rodriguez has not yet reached out to the family in any capacity.

Due to the trauma associated with the incident, both Tanveer Ahmed and Mohammed have been unable to work. The family is currently staying in Brooklyn in their former home prior to moving to Carteret. A fundraiser has raised nearly $220,000 to help relocate the family from their Carteret home and help pay for medical expenses.

But despite these struggles, the family is firm on getting justice for their child. “If we’re not safe in our own backyard, where are we safe? Nowhere!” Community members cried during the vigil. During the vigil, masked community members gathered in the street of the family’s Carteret home holding glow sticks in place of candles.

“My nephew was in his own yard. If you are not safe in your own yard, where are you safe? I feel we need some sort of closure,” Farzana Shabbir, Mohammed’s sister said. Mohammed still shook from the incident and declined to speak. “I clean my sister’s wound every day, but I cannot clean her heart. She purchased this home so her kids can play in the yard. She didn’t want that yard to be a graveyard.”

The mayor of Carteret reiterated calls for justice and noted that “people need to know they can be held criminally responsible,” for not taking care of or training their pets. “We want to be out here to join with the community and join with the family in mourning for Aziz. We’re here to show our support. My heart breaks. This was just a tragedy that should never have occurred,” Mayor Dan Reiman said at the vigil. He added that Carteret police and the borough health department have filed municipal charges with the owners for allowing the dogs to run at large and not being registered.

The fact that Aziz was a child is heartbreaking, but such an incident should not happen to anyone regardless of their age. We should all feel safe in our own homes. If we own pets, we should take responsibility for their actions because it is our duty as pet owners to care for them and train them right.

“An innocent baby was killed. He was just playing in the backyard,” Gursewak Singh, who has worked on the Ahmed house, said. ”I feel so bad for him. He just moved in. They don’t want to live here anymore. They want to move out.” Singh noted that had the police not arrived as quickly as it did the mother may not have survived. 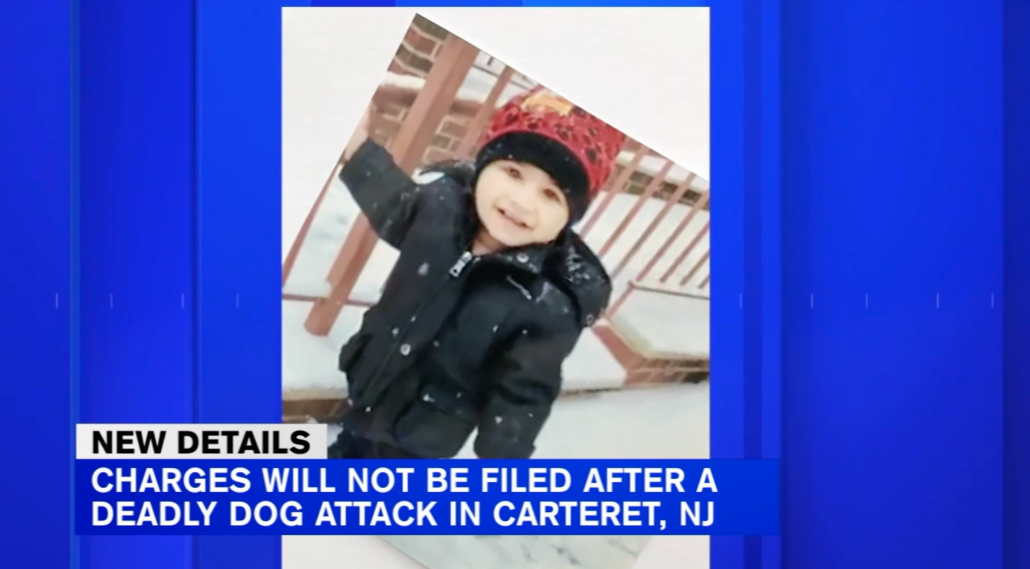 On Trials and Tribulations

© 2020 MuslimObserver.com, All Rights Reserved
A GoFundMe in her name raised $900K, but the Asian grandma who beat her attacker...

YouTube refuses to remove anti-Asian song despite rise in violence and comp...
Scroll to top