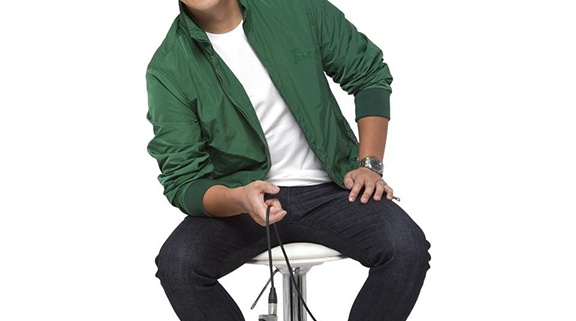 Would you believe there’s a star winning the hearts of millions in the Arab world – and beyond – but he’s not Arab or Muslim?

He’s a critically acclaimed stand-up comedian, singer, musician, interviewer and media personality. He’s also half Vietnamese and half Korean, speaks 5 languages, including Arabic, English, Vietnamese, French, and Korean in order of fluency, and was born and raised in the Middle East.

Describing himself as “an unlikely candidate” to “carry the torch to do standup comedy in Arabic,” Wonho knows he’s succeeding in his work with flying colors. And he absolutely loves what he does.

“Since I was four I saw myself as an entertainer. When you’re born you have natural inclinations towards a certain thing. … For me, I liked the arts.”

Wonho’s father, a Korean physiotherapist, moved to the Middle East with his Vietnamese wife in the 1970s. Wonho was born in Jeddah, Saudi Arabia and raised in Amman, Jordon.

Growing up, art thrived in his home. “My dad used to be a singer when he was young, he always sings. My aunt was an opera singer. We were always surrounded by music in the house. There’s a lot of art in my family,” he says.

But, it’s not just art that was rich in his family. It was also languages, which later opened up the world for Wonho.

“My parents used a mixture of Korean and Vietnamese [to speak to one another] because when they met they didn’t speak each other’s language. They ended up kind of learning it from each other. My sisters and I were enrolled into Arabic schools so we learned Arabic as our first language and we speak to each other in Arabic. …

“My dad was very adamant about teaching us English, so my sisters and I spoke to my dad purely in English. That’s how we picked it up because we didn’t go to American schools,” Wonho explains.

Being an Arabic-speaking Asian drew a lot of attention and created unique challenges for Wonho who has lived in the Middle East his entire life and currently resides in Dubai.

“I think what makes my struggles a bit more unique is the fact that my family’s immigration was not a typical diaspora. … Jordan had very, very few foreign expats in the ‘80s when we moved. So, people in the first place were not used to seeing Far East Asian people.

“Every time we walked in the streets, we were a spectacle. ‘Wow! We’ve never seen anything like this!’ [people would react]. But, it wasn’t anything terrible, I think.”

Though the attention might not have always been desired initially, Wonho’s distinct multilingual and multicultural identity has helped him become a sensation in the Arab world.

His career kicked off by surprise with the Axis of Evil tour in 2007. The team originally consisted of two Arab-Americans and one Iranian-American who were looking for a Korean to fill in their act.

Describing himself as being “head-hunted in a Puma store,” Wonho was innocently joking around with salespeople in Arabic when he caught the eye of a producer. It was clear that Wonho knew how to work a crowd and had an attractive personality to pair with it.

A short while later, “I got a call asking, ‘Hey, you want to join them?’ I was like ‘Pffft, what? Are you kidding me? Of course!’ Even if I sucked at stand-up, it’s an opportunity.”

But he didn’t suck. He was outstanding.

The crowd fell in love with his hilarious jokes, charismatic personality and fresh style. His perfect fluency in Arabic and awareness of its nuances raised eyebrows everywhere, making people swarm him like bees to honey.

While Wonho felt “very happy and grateful” for the opportunity that allowed him to launch his career as an entertainer, he always believed he’d make it someday.

“I don’t want to sound arrogant saying it, but when it happened … I kind of felt like, you know what – I was waiting for it. It was a great surprise but I expected it and I was ready for it.”

What made him so confident? “I feel like I paid my dues growing up,” he shares. Though Wonho went to an Arabic-speaking school and university “like everybody else” he also received extensive education in singing and playing instruments, setting him apart from the crowd.

“During that time when I was studying in school I actually spent a bit of my parents money to study music. When it got really expensive, I got a job during my university years. I would study, have classes from morning till 1 pm, I’d go home, have lunch, then from 3 to 6 pm I would work freelance jobs that paid me some money.

I would use that money to pay for piano [which] I did for three years … And I studied singing for six years in vocal studies, specializing in opera and musical theater. … And I did a lot of amateur theater.”

By the age of 20, Wonho had an impressive deal of stage experience. “I didn’t just go up on stage and do my thing. I actually studied it for a long time,” he states in response to those who accuse him of making it “just because you spoke Arabic.”

“[Many] don’t know I studied theater. Not every person who is given an opportunity to go up on stage succeeds. … It takes time, it takes effort, it takes education, it takes having a good thought process as an artist, it takes a good business plan as well,” shares Wonho who proudly runs his business independently.

Though comedy is a different domain from music, the parallels are obvious. There’s a stage to fill with entertainment, an audience to constantly wow, and the challenge to keep growing.

With a burgeoning social media following of over 2 million however, Wonho has triumphed in each category and has no plans to stop. He is even branching out to English comedy with his first English performance being in the 2014 Oslo Freedom Forum.

“When I went, I didn’t know what to expect. I was really consumed with the concern that ‘Oh my God, I’m going to perform in English … in front of a group of high-profile people that are not easily entertained.’

“I got a standing ovation, which I did not expect. … For me, the Oslo Freedom Forum changed my life a lot … I realized ‘Wow, I actually do have what it takes to perform in English’. … It was validation as an artist.”

But, it wasn’t just a standing ovation that left a deep impression on Wonho. Hearing the accounts of extreme torture from victims of illegal persecution around the world left a profound impact on him.

“All these stories I heard, you can’t not cry,” he says. He decided to harness his talents to good use by spreading smiles and laughter to people who need it most.

Four months ago, Wonho went to perform a couple of shows in Palestine.

“Making people laugh and being happy is one thing. But for me to go to Palestine, a nation that’s locked in, especially Gaza which is under siege, they have very little to be happy about. They have no resources, no jobs, no infrastructure, nothing.

“When I had the opportunity to go I jumped on it. I wanted to do it because of all people, these people are very deserving of a good time, even if it’s just for an hour.

“Getting up on stage and seeing genuine happiness and laughter meant a lot. It really, really meant a lot. The shows went fantastically. … It wasn’t the easiest thing to get into Palestine, I’ll tell you that. But it was worth it. It was worth it.”

Last month, Wonho also performed in Talent for Syria in Toronto, helping to raise over $100,000 for Syrian refugees and children. He has no plans to stop his charitable works through humor and entertainment. “I pray for a better future for #Syria, #Syrians and all refugees around the world,” he writes on his Facebook timeline.

But, beyond the bellyaching laughs, perhaps the greatest thing about Wonho is how he shatters some of the worst stereotypes. He’s a living testament of the vibrant culture and widespread tolerance that goes unreported in the Middle East.

“For sure, I identify most with my Arab identity,” Wonho asserts. “I was born, raised, educated and live amongst Muslims … [and] the image that the media is projecting of Muslims and Islam is highly untrue. I think there are great Muslim thinkers, great Muslim artists, great Muslim everything. …

“I try to project a different image of Islam and people in the Arab world … I try to change those misconceptions but then again I’m not into politics, so I don’t want my job to be just that. But, whenever I can, I like to talk about it.” 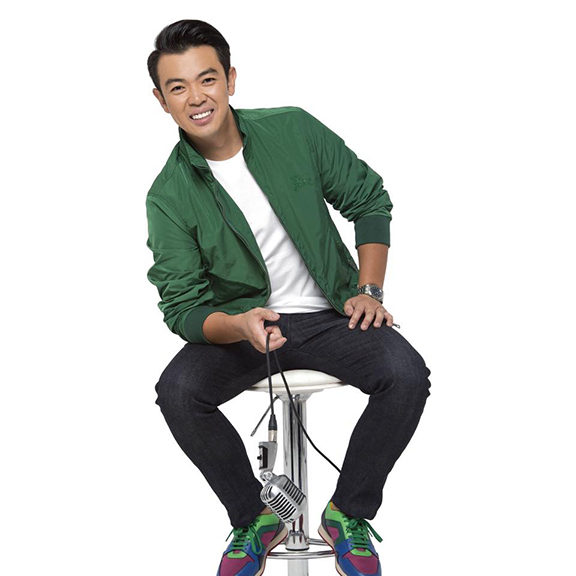 © 2020 MuslimObserver.com, All Rights Reserved
The punch heard across the NFL