Mosques across America (and elsewhere) are experiencing fires, violence, vandalism, and malicious threats at an alarming rate since the election of Donald Trump (if the rate of incidents since November continues, perhaps up to 1 in 20 mosques in the US might expect to face a security challenge during the Trump administration). Of course, the President is not the original source of anti-Muslim aggression. Islamophobia-driven hate crimes have been rising for over a decade (see Figure 1). However, the recent election may have emboldened some who wish to harm Muslims, and Trump’s silence on Islamophobic hate is deafening. 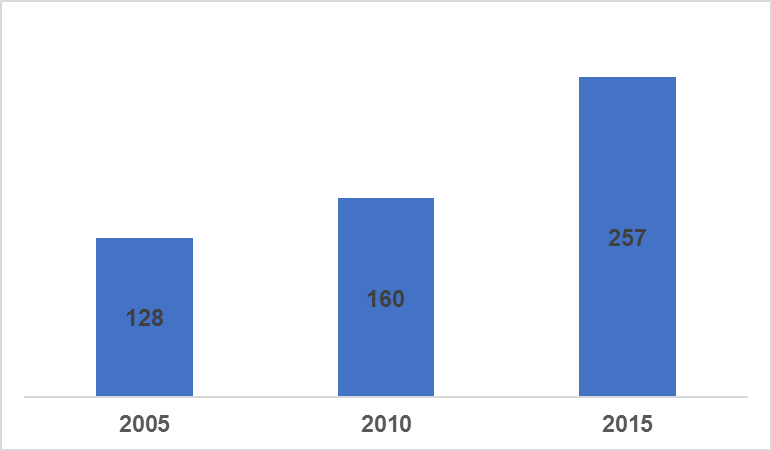 Unfortunately, many Islamic institutions have done little to prevent or mitigate any security threats. To illustrate this gap, consider the lack of even a simple fire drill exercise at mosques across the country and imagine how people would act if a fire broke out during Friday prayers. Similarly, while Muslim leaders may express concern about Islamophobia, not enough have taken concrete steps to address the physical threats Islamophobia represents or to protect vulnerabilities at mosques and Islamic schools. Too many mosques have prioritized investments in adornments or capacity to accommodate Eid crowds over basic security measures. In cases where recent events have spurred complacent institutions into action at last, some are considering hiring costly (and largely unsustainable) professional security forces before engaging in more basic preparation. 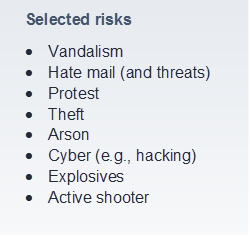 The principles of Islamic law (maqasid al shariah) place a priority on prevention of harm, and fortunately, Allah and his Messenger (S) have left Muslims guidance to address for challenges such as this.

Allah is very specific in the 102nd verse of Chapter 4 of the Qur’an, with instructions for the context of Muslims under threat when praying, “…So, when they have prostrated themselves, (i.e., finished their prayer) then let them be in your rear-guard; and let another section who have not prayed come up (and) so let them pray with you…” Muslims in pre-modern times applied this verse in times of conflict. However, when a random active shooter is now a threat to congregations across the nation, mosques can look for ways to apply this verse in our modern context.

The Prophet’s (S) tradition and example also provide many lessons in the importance of protecting the community from threats. In the context of security, his (S) general injunction to “Tie your camel [i.e., prepare] and then place your trust in Allah,” suggests Muslims should take precautionary measures, then rely on Allah’s ultimate protection. Indeed, the Muslim community has developed a long tradition of preventative, defensive measures to protect religion, life, intellect, family, and property, and the posting of sentries has a longer history in Islam than either domes or minarets (Consider the action of Hamza (R) to intercept Umar (R) during his visit to accept Islam, prior to construction of any mosque). The Prophet (S) extolled the virtues of defending life, wealth, and faith (“Whoever is killed protecting himself is a martyr, whoever is killed protecting his family is a martyr, and whoever is killed protecting his wealth is a martyr, [and whoever is killed protecting his deen is a martyr].” – Muhammad (S), narrated by Abu Dawud and Tirmidhi) in several narrations. He also specifically highlighted many unique rewards to the one who keeps watch or guard for the sake of Allah (“Ribat”)(“The deeds of a dead person are sealed (at the time of death) except the one who stands guard in the way of Allah; his good deeds continue to increase until the Day of Resurrection, and he is protected from the trial of the grave.” – Muhammad (S), narrated by Ahmad, Abu Dawud, Tirmidhi, and others).

A security framework for Islamic institutions

An ideal approach for Islamic institutions toward security issues in fulfillment of this divine mandate can be summarized in five pillars:

Mosques and Islamic schools must prepare a site-specific Plan to identify, prepare for, and mitigate potential threats and risks. They must develop capabilities to Monitor the physical premises and digital landscape to sense status and detect potential threats. Muslim institutions should attempt to Deter threats using design, signage, surveillance, and vigilance. They should Engage authorities, neighbors, members, and volunteers to facilitate planning, monitoring, and deterrence. Such engagement and communication can also foster a culture of security consciousness and readiness among stakeholders. And in the end, after taking appropriate precautions, our organizations and communities must Rely on Allah, the ultimate Protector and source of Peace. 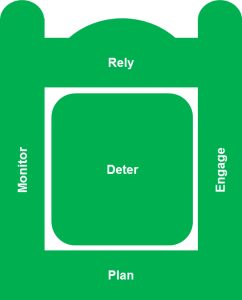 In practical terms, at a minimum, mosques, Islamic organizations, and Muslims need to start taking security more seriously. The Michigan Muslim Community Council’s recent PSA on security issues suggests our institutions make safety and security a priority on their agendas. Every mosque and Islamic school should recruit or appoint a security team to prepare an emergency plan with modules in preparation for arson/fire, active shooter, bomb, medical, and other types of incidents, responses to which often share similar characteristics. The responsible team can also install appropriate signage, establish a schedule for volunteers to keep watch over the facility and implement a dozen other low-cost solutions that would enhance security in the short term. 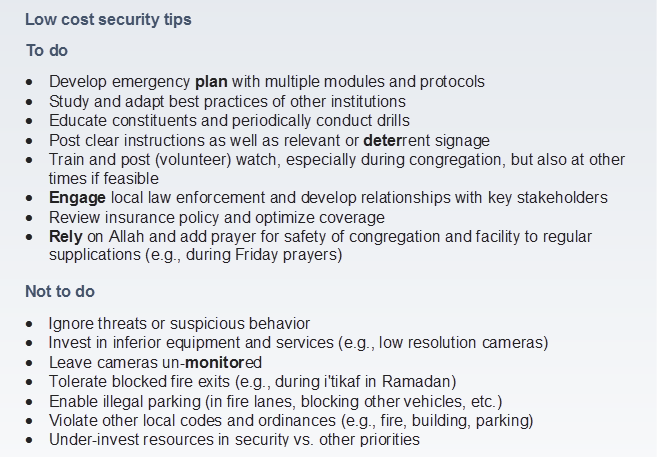 Such precautions are not beyond the capabilities or capacities of our communities. The Muslim Center (on Davison Rd, in Detroit) has secured parking facilities and posted a sentinel at the door during prayer for many years. Masjid al-Falah in nearby Hamtramck reportedly maintained a schedule of volunteers to keep watch over the mosque at night, since well before the Trump era. If such communities with relatively limited resources can find a way to make security a priority, all others should follow suit.

In the long term, Islamic institutions can adopt a variety of design elements that build security into community facilities. Not every design element is appropriate for every institution. However, security should be a priority for all construction and expansion projects moving forward, in addition to budget, aesthetics, and function.

At the individual level, American Muslims should embrace the opportunity to unlock massive rewards by participating in efforts to enhance community security. When a day and night of “Ribat” is worth more than a month of fasting and standing for night prayer (Per Hadith narrated by Muslim), Imams should encourage and educate communities about the value of such service. Muslims can serve on a security committee or even by simply volunteering to take an occasional shift as a sentinel who prays after the congregation. At the very least, Muslims should embrace a mentality of security consciousness in their use and expectations of community facilities. 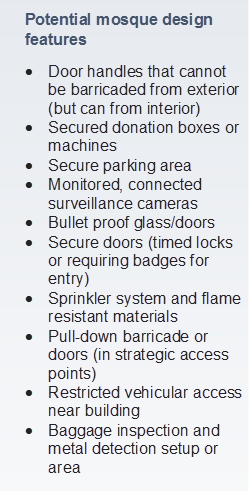 American Muslims have long been blessed with peace and safety in many ways. Muslims in America faceless violence than many Muslims across the world or Americans at home. Mosques in the US are easily accessible when those in other countries close for much of the day, and other faith facilities in the US have more limited use. However, in Trump’s America, that long peace may be changing, and our institutions must change too. Thankfully, it is not too late for most Islamic institutions in the US to borrow from our traditions, make investments, and take precautions to mitigate possible negative outcomes, if Allah wills it.

S.N. Syed is a Michigan-based consultant and member of MMCC’s Security Task Force 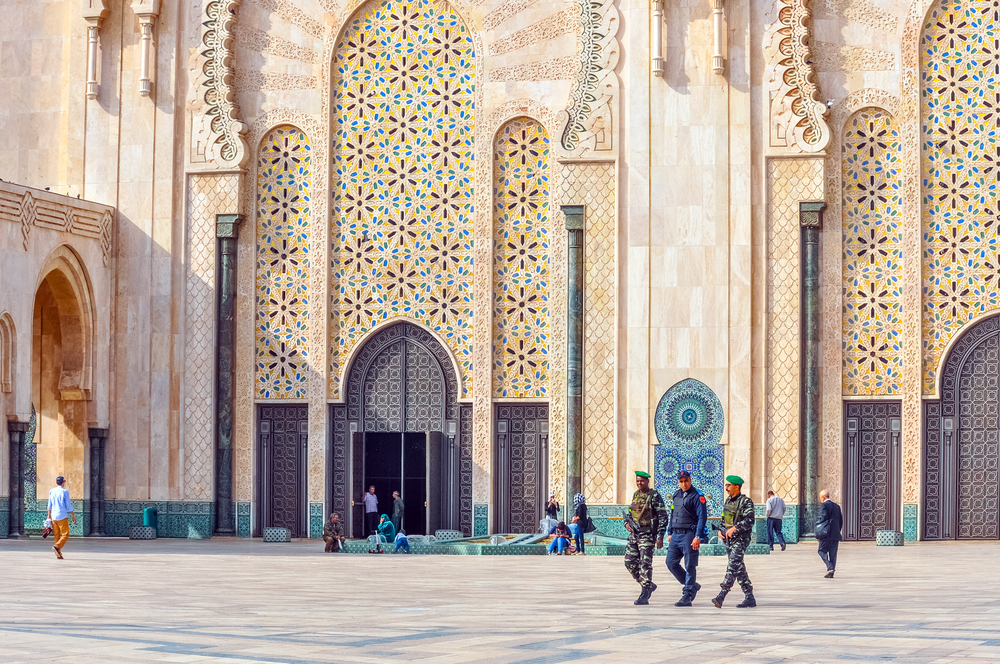 Dr. Fazlur Rahman Khan honored in a series of lectures

NHL’s Oilers Stick to Script as Jets Take Off

Congressional Committee on Kashmir show concern over human rights conditions
by Dr. Aslam Abdullah A congressional hearing on Human Rights in South Asia: Views from the State Department and the…

The Failure of the Merkava

A Terrorist by Any Other Name

Manal Al-Sharif’s ‘Daring to Drive’ Sheds Light on What Life...
Scroll to top