Re-Development and the uprisings

Today, the news media will look over the aftermath of yesterday’s uprising in Baltimore and take stock of the burned remains of cars and storefronts. Reporters will also see the shells of 46,000 empty lots and vacant homes lining the neighborhoods that were riven by unrest.

However, the media and its audience must be careful not to think that the burned-out look of so much of the city is the result of this recent unrest, or even of the uprisings of 1968, which followed the assassination of the Reverend Martin Luther King Jr.

The 1968 riots in Baltimore

Baltimore’s blight is the result of decades of disinvestment, from the blockbusting and white flight of the 1950s, the urban renewal policies of the 1960s, and the evacuation of the largely poor and black neighborhoods of East Baltimore to make way for the expansion of Johns Hopkins University taking place today. Development has long been uneven in Baltimore, and black folks and their neighborhoods have consistently been left out of that development.

What we are seeing today could only have occurred against this backdrop of planned uneven development. One of the dangers of seeing the riot as an event is precisely this danger of losing historical perspective about the ways the neighborhoods burning on television are the very ones that have been cut off from the growth of the city’s downtown core.

When asking what can be done, it is important to get to the root, to ask and see how these neighborhoods have been constituted as the ones that will burn, figuratively and literally.

Going beyond the burning

When the sun rose Tuesday, the toll of Monday’s riots in response to the death of Freddie Gray in police custody were laid bare: 20 Baltimore police officers injured, the charred skeletons of cars and looted businesses, and over 200 arrests.

However, the cost of the Freddie Gray riots cannot be measured in dollars and lives alone. For communities and police alike, the death of Freddie Gray and the violence that swept through the streets of Baltimore cut deeper than burned businesses or hurled cinder blocks.

For minority residents, the death of Freddie Gray is proof par excellence that the protests after the deaths of Mike Brown, Eric Gardner, Tamir Rice, and too many more have been futile. It’s proof that the battles of the Baltimore riots of 1968 are still being waged, and that police and the powers that be still see and treat protests and protestors as problems to be controlled.

For police, Monday’s violence is angering. They see people willfully destroying their communities and attacking police officers. What they do not see is powerless, unheard victims of centuries of racism, segregation, and inequality.

For both sides, the last few days in Baltimore are only the most recent in a long and tumultuous history of mutual distrust and fear between police and communities of color. To make matters worse, when the smoke clears and the glass has been swept up, neither side is likely to have changed their mind about the other.

The road to reconciliation must begin in the same streets now marred by violent unrest. Just as distrust and fear have been born out of decades of interactions between police and citizens, it is through one interaction at a time that we can begin to heal the wounds that scar the public and police.

Recent developments like the federally funded National Initiative for Building Community Trust and Justiceharness the power of procedural justice and racial reconciliationto build trust and establish the legitimacy of law.

In lieu of the truncheon, these strategies leverage respect and honesty to built trust that canenhance the safety of citizens and police alike.

It is not an easy road, and much work remains to be done, but the fires and blood in Baltimore make it all too clear that the time to dedicate ourselves to building trust between the police and the public is now.

Us vs them needs to be us with them

Just a cursory glance at some of the popular commentary in media about the riots in Baltimore shows a great divide in the public on opinions regarding the reasons for and outcomes of the recent riots.

Some point fingers and blame protestors for being violent criminals who are destroying their own neighborhoods while others point the blame at overzealous racist cops who use force to get what they want. Some have called for an increase in riotous action to defeat the police while others call for more national guardsmen and police officers to quell protestors. In essence, this all leads to macro-scale violence escalation and a widening of the us vs. them mindset.

We need to transform this into an “us with them” mindset in order to de-escalate violence. There are already examples of this. In Ferguson, police took off riot gear and joined peaceful protestors.
In New York, police are already expected to get more training in de-escalation techniques as recent incidents have illuminated the need for more training. Our research shows that empathy by police increases trust and perceptions of effectiveness.

Moreover, programs like Project TIPS (Trust, Information, Programs, and Services) in Rochester, NY highlight how communities can voice their concerns and work with police to improve communities while a related project brings police and teens together so that the community can understand viewpoints of law enforcement.

The spark that flamed the Baltimore riots is the same one kindling many potential riots across the United States. We need to do away with pointless finger-pointing and come together to profitably understand one another and improve community safety. 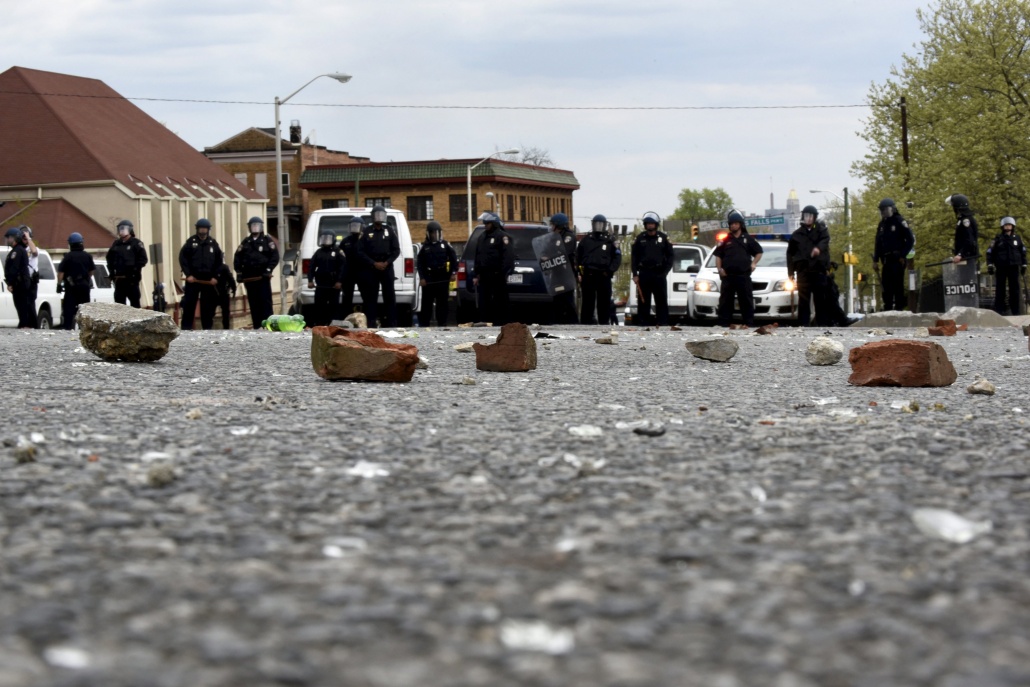 The eyes have it: macular degeneration
Scroll to top