The Shoe Thrown ‘Round the World

In one single gesture, Iraqi journalist Muntazer al-Zaidi summed up the sentiments that had been swelling in the hearts of Iraqiâ€™s and Muslims from all over the world ever since former President George W. Bush indulged in his own â€˜Axis of Evilâ€™ and went to war with Iraq. With the throw of a pair of size 10 loafers, al-Zaidi unleashed a wave of discontent that Iraqiâ€™s had grappled with ever since their country was unlawfully invaded.

Many Muslims from all over the world cheered, as scenes of adults and children alike rejoicing in the streets of Baghdad waving their own shoes in the air played out on TV. Copycat shoe throwers also emerged in the days following the incident, most notably in India and China where at least two diplomats found themselves also dodging footwear.

However, news about the man behind the shoes was hard to come by. Following the incident, he was rushed away by Iraqi security personnel and imprisoned. Family members later revealed that al-Zaidi was severely beaten and tortured in prison. He was originally sentenced to spend three years in prison, but served only nine months of that sentence as he was recently released.

Further al-Zaidi denies that he is a hero and writes, â€œIt humiliated me to see my country humiliated; and to see my Baghdad burned, my people killed. Thousands of tragic pictures remained in my head, pushing me towards the path of confrontation. The scandal of Abu Ghraib, the massacres of Falluja, Najaf, Haditha, Sadr City, Basra, Diyala, Mosul, Tal Afar, and every inch of our wounded land. I traveled through my burning land and saw with my own eyes the pain of the victims, and heard with my own ears the screams of the orphans and the bereaved. And a feeling of shame haunted me like an ugly name because I was powerless.â€

After his release, al-Zaidi was reunited with his family in a tearful and long-awaited reunion. According to his employer Al-Baghdadia TV, al-Zaidi has left Iraq and will travel to Syria and later Greece to receive medical care. Al-Zaidi suffered greatly at the hands of Iraqi security personnel who beat him with melt bars, electrocuted him with live wires and engaged in â€˜water boardingâ€™ to make him feel like he was drowning. The state of al-Zaidiâ€™s health is unknown at the present time.

In a recent development, al-Zaidi also revealed his future plans in a TV interview conducted by TSR television. He hopes to rally Iraqis together to lodge a complaint against former President Bush and put him on trial in The Hague for crimes against humanity. â€œI really want to go to Switzerland because it is a neutral country and because it is a country that did not support the occupation of Iraq,â€ al-Zaidi said, â€œSwitzerland hosts many international organizations, including some that fight for children, and Switzerland is a country that has a great democratic tradition. It is an example for the world,â€

While the man himself may resist being touted as a hero for his actions. At least one artist has forever immortalized the shoes that were â€˜thrownâ€™ around the world. Based in London, artist P Waniewski has created a pair of size 10 shoes identical to the ones al-Zaidi threw, since U.S. security personnel purportedly destroyed the original pair following the incident. So named, â€˜Proud Shoesâ€™ the tribute is made of 21 kilograms of bronze and dipped in 24 KT. gold. The artist recently revealed in an interview his reasons for creating the tribute to al-Zaidi, â€œWhen I heard this story I was moved by the passion and fearlessness of Mr al-Zaidiâ€™s actions. The shoe that he threw was destroyed by the US authorities, so I felt it was a fitting way of marking this emotive event.â€ 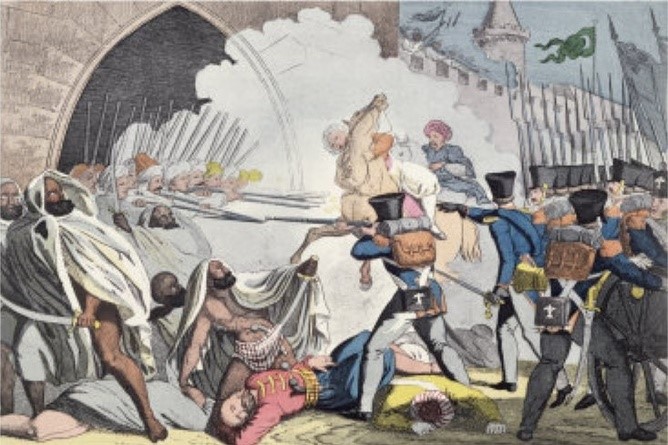 Expert: Crime of Torture Could Only Have Been Ordered by the President

Mohamed Sanu Ready to Ascend
By Parvez Fatteh, TMO, Founder of http://sportingummah.com, sports@muslimobserver.com The Rutgers University football team may have a new offensive coordinator, but…

Exercising the Power of Vote