On one of the most sacred and significant days in Christian history, in a Buddhist dominated state of Sri Lanka, suicide bombers allegedly belonging to an outfit described as Muslims killed more than 250 worshipers and injured hundreds more. The US described them ISIS-inspired and the Sri Lankan government called them local Sri Lankans with ties to National Toweeth Jamath.

“For members of Sri Lanka’s Muslim community, it’s no surprise that local jihadist group National Thowheed Jamath is being blamed for deadly bombings that killed nearly 300 people on Easter Sunday.

Hilmy Ahamed, vice president of the Muslim Council of Sri Lanka, said he warned military intelligence officials about the group and its leaders about three years ago. “Targeting the non-Muslim community is something they encourage — they say you have to kill them in the name of religion,” Ahamed said in a phone interview from Colombo on Monday. “I personally have gone and handed over all the documents three years ago, giving names and details of all these people. They have sat on it. That’s the tragedy.”

Religious places and religious worshipers are the easiest targets, a terrorist can attack without much resistance. This is what the terrorists have been doing for decades. A mob in 1992 in India demolished a house of God under the instigation of political leadership that claimed that it was built on the birthplace of a mythological Hindu warrior and ruler Rama, who has been given the status of a god by some of the followers of the Hindu faith. Two years later, a Jewish doctor gunned down scores of worshiping people in occupied Palestine. Until 2010, scores of places were attacked, vandalized and brutalized, sometimes by followers of rival religions and sometimes by the followers of the same religion belonging to different sects.

Houses of worship around the world, a place of reflection and peace, have been targeted for attack by extremists. Here are some of the deadly assaults over the last decade:

Since 2010, the world started taking note of such incidents. Thus in the last 19 years, some majors acts of violence took place and they are as follows.

Dec. 15, 2010: Two suicide bombers from the Sunni extremist group Jundallah blew themselves up near a mosque in southeastern Iran.

July 16, 2010: Jundallah group killed 27 and injures 270 after it carried out a double suicide bombing against another Shiite mosque in southeastern Iran.

Aug. 5, 2012: Six members of the Sikh Temple of Wisconsin, in Oak Creek, were fatally shot by a white supremacist, Wade Michael Page. Page was shot by a responding officer and later killed himself.

Nov. 18, 2014: Two Palestinians using axes, knives and a gun killed four Jewish worshippers and an Israeli police officer in an attack on a Jerusalem synagogue.

June 17, 2015: Nine black worshippers including a pastor were killed by Dylann Roof, a 21-year-old white supremacist after he prayed with them in Charleston, South Carolina. Roof was convicted of federal hate-crime and obstruction-of-religion charges and sentenced to death.

Sept. 24, 2015: A suicide bomber struck a mosque in Yemen’s rebel-held capital, killing 25 worshippers during prayers for the Muslim holiday of Eid al-Adha.

Nov. 12, 2016: Suicide bomber from ISIS killed over 50 at the shrine of Shah Noorani, in Pakistan’s Baluchistan province.

Jan, 29, 2017: At the Islamic Cultural Centre of Quebec City, a mosque in the Sainte-Foy neighborhood of Quebec City, Canada. Six worshippers were killed and nineteen others injured when a man opened fire

Feb. 16, 2017: Suicide bomber detonated his explosives vest among the devotees at the shrine of Lal Shahbaz Qalandar in Pakistan’s Sindh province, killing 98.

April 9, 2017: Twin suicide bombings rocked churches in the Egyptian coastal city of Alexandria and Tanta, killing at least 45 people. The attack was claimed by the Islamic State group.

June 15, 2017: A suicide bomber killed four people at a Shiite mosque in Afghanistan’s capital city of Kabul. Among the dead is a leader of Afghanistan’s ethnic Hazaras, who are mostly Shiite Muslims.

Aug. 1, 2017: A suicide bomber stormed into the largest Shiite mosque in Afghanistan’s western Herat province, opening fire on worshippers before blowing himself up, killing at least 90 people. Hundreds more were wounded in the attack, which happened during evening prayers.

Aug. 25, 2017: Militants storm a packed Shiite mosque in Kabul during Friday prayers. The attack ends with at least 28 worshippers killed and 50 wounded, many of them children. Two of the assailants blow themselves up and another two are shot dead by Afghan security forces.

Sept. 29, 2017: A suicide bomber blew himself up outside a Shiite mosque in Kabul, killing five. The attack took place as worshippers were leaving the mosque after Friday prayers.

Nov. 5, 2017: Dressed in black tactical-style gear and armed with an assault weapon, 26-year-old Devin Kelley opened fire at the First Baptist Church of Sutherland Springs, Texas, killing 26 people and wounding about 20 others.

Nov. 24, 2017: Militants killed 311 worshippers in a mosque attack in north Sinai, the deadliest such terrorist attack in Egypt’s modern history.

Oct. 27, 2018: A gunman believed to have spewed anti-Semitic slurs and rhetoric on social media entered Tree of Life Congregation synagogue in Pittsburgh and opened fire, killing 11 and wounding six, including four police officers.

Jan. 27, 2019: Two suicide attackers detonate two bombs during a Mass in a Roman Catholic cathedral on the largely Muslim island of Jolo in the southern Philippines, killing 23 and wounding about 100 others. Three days later, an attacker hurls a grenade in a mosque in nearby Zamboanga city, killing two religious teachers.

March 15, 2019: At least 51 people are killed in an attack at mosques in the New Zealand city of Christchurch.

In addition to that hundreds of places of worship were destroyed by either authorities or mobs in China, Myanmar, Israel, Congo and India in the last several decades.

Apparently, religious violence is on the rise and the religious leadership is failing to control hatred, terror and violence committed by their followers.

In this increasingly volatile and violent situation, it is easier to point fingers at others and blame them and religion for that. The reality is that no sane person and no genuine religion can promote violence or terror against those who differ with its basic tenets. No one is born with hatred as part of his or her gene. People learn to hate based on what learn in their families, religious institutions, schools and social and political circles. People are often instigated to use violence and terror to silence others or to intimidate a whole community.

It is this notorious brainwashing done in the name of religion that needs to be challenged and eliminated. Every religious community has to play a proactive role in controlling its hate mongers, but the most effective way is to challenge the promoters of violence and terror through interfaith efforts.

The religious community must come together to fight this menace that has become a political tool to divide people and spread hatred and violence. If such an initiative is not taken, then we all will suffer.

The attack on the Christians of Sri Lanka was, in fact, an attack on Muslims, Christians, Jews, Hindus, Buddhists and in fact, the people of all faith and no faith. Only when the religious communities come together to fight the menace of terror, we can work for peaceful coexistence, otherwise, the monster of terror would continue to hurt each one of us. 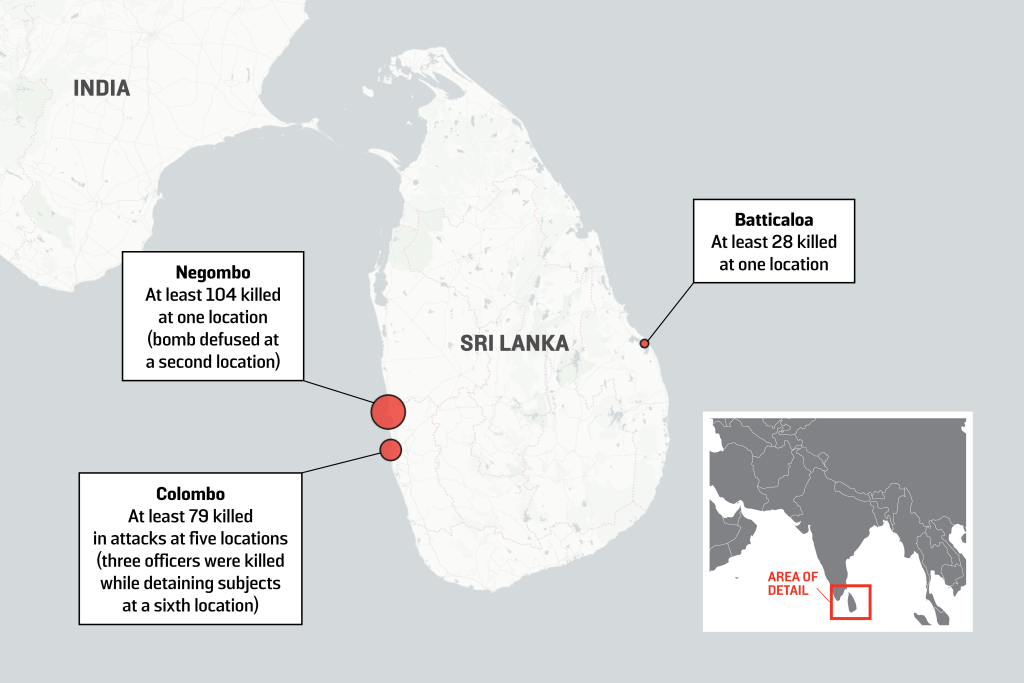 Top Reasons We Put Off Doing Our Estate Plan

Former Intel Chief: Call Off The Drone War (And Maybe the Whole War on Terror)
By Noah Shachtman ASPEN, Colorado Ground the U.S. drone war in Pakistan. Rethink the idea of spending billions of dollars…