Flint,
Michigan (1/28/2016) – “I am sorry and I will fix it!” Over a hundred thousand
residents of Flint, Michigan received an apology from the Governor of Michigan
last December. It was the governor’s appointed emergency manager that switched
the water supply of Flint to a cheaper alternative in April of 2014. The large
Muslim community of Michigan has joined civic and relief groups to help out its
neighbors in Flint.

Local
groups including the Michigan Muslim Community Council (MMCC), Zaman
International, the Grand Blanc Muslim Youth group, the Sylvester Broome Center,
the Amity Foundation, the Ahmadiyya Muslim Community, Who is Hussein, the
Pakistan American Social Movement, local chapters of the Muslim Students
Association and national groups including Islamic Relief USA, Life for Relief
and Development are just a few of the many Muslim and Arab organizations that
are bringing water and volunteers to Flint. In the past 2 weeks, an estimated
over 150,000 bottles of water have been donated and almost 300 Muslim
volunteers have joined local teams personally delivering cases of water to
residents in Flint’s hardest hit areas.

“It’s a
tragedy that the people of Flint have been neglected, they are our neighbors
and they deserve clean and safe water,” said Amina Iqbal, Director of
Operations for MMCC. “Michigan’s nick name is the Great Lake State, and it is
an embarrassment that we cannot provide water to our own people.”

MMCC
started a successful nationwide crowd funding campaign through LaunchGood.com to raise $50,000 to
purchase water supplies and provide education for Flint residents. Almost
$25,000 has been raised in the first 2 weeks. Local Muslim physicians led by
neurosurgeon Dr. Jawad Shah have begun lead screening at the Sylvester Broome
Center.  Over 100 volunteers from the Muslim community were present in the
first weeks after the declaration of a federal emergency distributing water,
supplying filters, packing food, unloading trucks, drawing blood samples and
more.

Large
national American Muslim relief agencies have also started operations in Flint.
Life for Relief and Development and Islamic Relief USA have both been visibly
on the ground with truck and staff delivering water and coordinating with the
Red Cross and food pantries. The Islamic Relief USA has committed to bringing
over 30,000 bottles of water weekly and coordinating local volunteers for the
months of January and February. .

The
intense interest in this hard hit city is not new. It was the center of
attention in the social Flint native Michael Moore’s debut hit documentary,
“Roger and Me.” In this movie, he lampooned General Motors CEO Roger Smith for
destroying Flint’s economy by transferring jobs to Mexico and laying off
thousands of workers. Flint’s economic woes only worsened over the following
years.

In
2011, Governor Rick Snyder appointed an emergency manager to take over Flint
due to worsening budget deficits based on a controversial Michigan law. The
people of Flint lost their local voice in how they were governed. The emergency
manager switched the water supply from the city of Detroit, to the nearby Flint
River to save money in April of 2014. Almost immediately, the water in Flint
homes was yellow tinged with a foul taste and odor, Despite this, state
officials assured residents the water was safe to use.

The Flint Coalition for Clean Water was a diverse
group of local activists that helped spur the fight against the toxic water.
Concerned Pastors for Social Action and several individuals played a major role
in the organizing effort. Several Muslims were among them including Nayirrah
Sharif, Leon Elamin and Mona Haydar.

Nayirrah
organized some of the original protests and leads an active twitter feed
providing the outside world a glimpse of what life is like inside Flint. Former
Flint resident, Mona Haydar, protested with the clean water coalition because
she felt it was the right thing to do. “It’s not enough to do well for
ourselves, we also have to take care of other people beyond the walls of the
masjid.”

Leon
Elamin leads the MADE Institute where it helps returning citizens from prison
and youth develop job skills and training. Although Leon’s initial interactions
with the local immigrant Muslim population were not positive, he gradually
developed relationships with the second generation of young American Muslims
from the immigrant communities. According to Leon, “There were a lot of
barriers and prejudices… some people would not even want to stand next to me in
prayer.” However, the new generation of Muslims embraced the chance to work
others who were of different ethnic or socioeconomic backgrounds, “Young people
are our hope,” he says.

Leon
Elamin joined other Muslims from the larger Flint community and established the
Sylvester Broome Empowerment Village to help create a positive change in the
urban Flint areas. The Center’s new executive director, Omar Kamran, has seen a
flurry of activity with the water crisis, and has seen a bigger role for the
community: “We want everyone to understand that there is no quick fix to this
catastrophe. There is a clear need for a sustained long-term relief effort that
must coincide with the rebuilding of our water infrastructure.”

“We want everyone to understand that there is no quick fix to this catastrophe. There is a clear need for a sustained long-term relief effort that must coincide with the rebuilding of our water infrastructure.”

According to Tarek Baydoun, project spokesperson for MMCC, “We need to do more than just provide water, we must make a commitment to investing in our infrastructure and reforming of government to make sure this failure never happens again here or in any other city.” The Flint Coalition for Clean Water and other advocacy groups are joining together to make just such a push.

The positive impact Muslim are having in Flint is being noticed. Speaking from his heart, Tim Abdul-Matin, a Flint resident, had a message to those who were donating and volunteering, “Thank you all for helping Flint during this crisis. On behalf of myself, my family, and the citizens whose voices you may not hear, Thank you! May Allah reward you all!

“Thank you all for helping Flint during this crisis. On behalf of myself, my family, and the citizens whose voices you may not hear, Thank you! May Allah reward you all!” 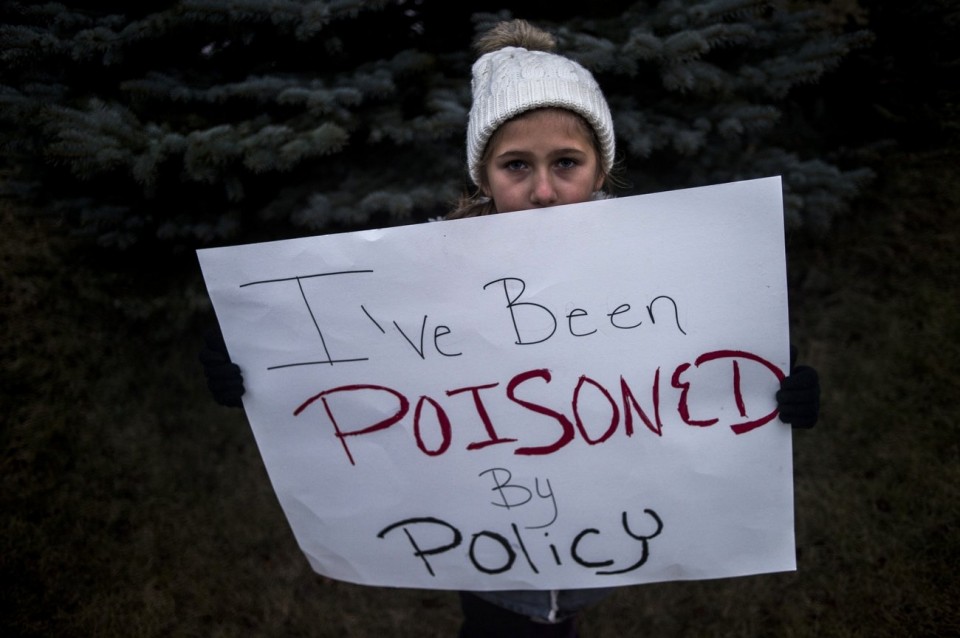