“I have never been to a Muslim event that started on time,” said Michigan Muslim Community Council’s (MMCC)  keynote speaker, Linda Sarsour at the 29th Annual Unity Banquet on Sunday November 1. Attendees were impressed with the punctuality of the program.

The banquet attracted over 600 attendees that included imams, government officials, dozens of leaders from non-profit organizations and businesses, and students from various high schools and colleges throughout Michigan. The event was sold out. Fatima Salman, MMCC board member, said it was “hands down, the best MMCC banquet ever.”

The emcee, Fatina Abdrabboh, Executive Director of the Arab American Anti-Discrimination Committee (ADC), welcomed the guests and introduced MMCC’s Chairperson, Dr. Muzammil Ahmed. Dr. Ahmed spoke about MMCC being the platform that brings communities from diverse cultures and religious backgrounds together to move Michigan forward. He talked about the recent events revolving around the Sterling Heights mosque, and said he does not believe people intentionally hate Muslims. They just don’t know a Muslim, so it is up to us to reach out to them.

Imam Mohammed Almasmari, MMCC’s Executive Director stressed on the important of unity, “If we want to change Michigan, we need to break all ethnic barriers.”

After their remarks, MMCC introduced award winners with professional introduction videos. Carol Cain, the Fairness in Media recipient commended the work of MMCC having seen, attended, and having been our Capitol Day emcee in 2014. Then Islamic Relief USA’s CEO Anwar Khan, recipient of the Syed Salman Community Service Award, spoke about Syed Salman and the legacy of community service he left behind. He talked about IRUSA’s assistance in providing the people of Detroit with water and how he thought it was an “Islamic issue, a humanitarian issue”. IRUSA was also one of our biggest sponsor’s for the Unity Banquet. Jim Tuman, recipient of MMCC’s interfaith partner award, brought over 20 guests and sponsored a table because he felt his friends “needed to know Muslims for the kind-hearted people they really are.” He spoke about Jimmy’s Kids, a program that he initiated over twenty years ago to provide Christmas presents to the underprivileged children of Detroit. Muslims and Jewish community members collectively work together each year to spread joy to children on Christmas as one of the volunteer interfaith services provided on December 25.

Dawud Walid, Executive Director of CAIR-MI, introduced the keynote for the night, civil rights activist and executive director of the Arab American Association of New York, Linda Sarsour. “Every community that has come before us always had to have courage instilled within. So, sisters and brothers, tell your children and youth: their faith encourages them to be courageous. To be truth tellers. Be courageous, speak truth and stand for what you believe in – we need that courage for generations to come.” Sarsour captured the hearts of both young and old. When we asked our youth workers who they felt our next year’s keynote should be the first response was, “Linda Sarsour. Bring her again and again.” 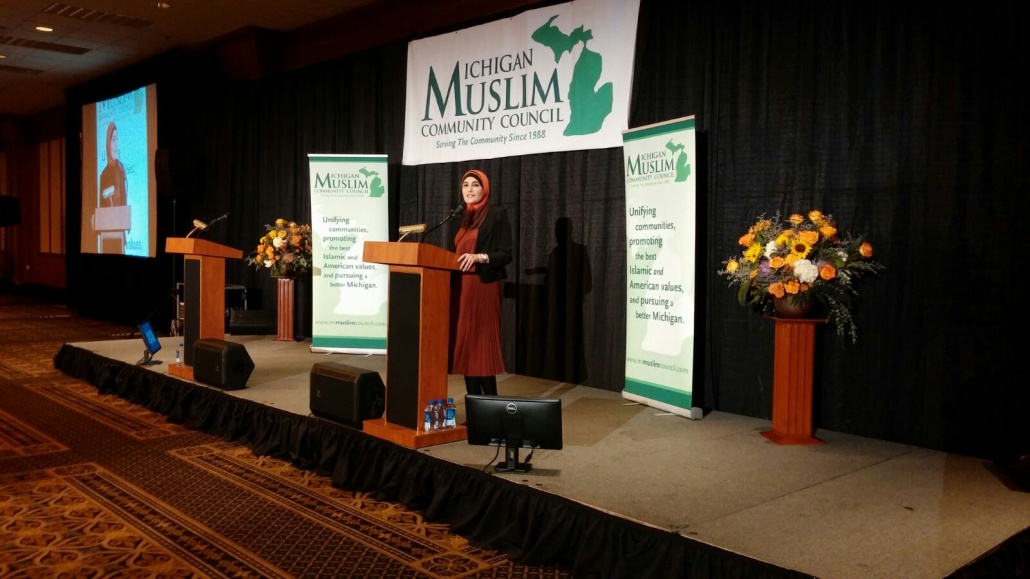 Conversions to Islam continue to increase
Scroll to top