Muhammad, a team gold-medal winner at the Pan-American Games, spoke about participating in sports growing up as a hijabi wearing modest dress. “Hijab brought me to fencing,” she stated, because the fencing outfit covers the body, unlike other sports costumes. She said that by succeeding in her sport, she was able to open the door for other hijab-wearing women.

Although Muhammad experienced racial discrimination and religious bigotry, she did not let this crush her self-esteem. She advised Muslim women athletes to strive to be successful regardless of what anyone says. “Being different has its obstacles, but it’s not something you can’t overcome,” she said.

Muhammad also spoke of the importance of humility. “Don’t think you are the best. There is always someone running faster, jumping higher. Champions train hard. If you want to win, you have to work harder than the next person.

“You hurt yourself when you think you are the best and you know everything.”

Following Muhammad was Rashida Tlaib, the first Muslim woman to be elected to Michigan’s state legislature and the second ever in the United States overall. Tlaib spoke about the importance of Muslim women engaging with institutions to serve the community.

Tlaib said that she does not consider herself to be a politician but an activist and public servant. She explained that political activism does not have to revolve around a candidate but can focus on an issue, and not necessarily an “Islamic issue.” Like Muhammad, Tlaib also believes that acceptance comes after achievement.  “Once people know who you are, they won’t care that you are Muslim,” she said.

Tlaib recalled the time she was going to campaign at a black Baptist church. She was the only non-black person there, and she could feel the tension. But then an old lady stood up, pointed her cane at Tlaib and said, “That’s the lady that saved my home from tax foreclosure!” Immediately it was like a light came on in the room.

Tlaib told TMO that she does not wear hijab because she doesn’t want the burden of representing Islam, but she said it is not impossible to get elected with hijab. However, wearing hijab does make getting elected more difficult. “You will have to answer questions about Islam every time you knock on a door, before you can even talk about your campaign platform,” she explained.

As a Muslim woman asserting yourself in the community, you are going to get “pushback,” she said. But it is very important to be in the room. The majority of Americans have never met a Muslim. 80% of the legislature has never met a Muslim. When they start saying ignorant things about Islam or Muslims, it’s important for you to be there, to correct them.

Tlaib was able to defeat a proposed anti-Shariah law by joining forces with Jewish and Catholic groups in the name of religious freedom.

When she heard that all the Michigan legislators except for her were invited by the American Israel Public Affairs Committee to go on a free trip to Israel, she advised her colleagues to “pay attention to Us vs. Them thinking.” When they came back, they told her, “You were right!”

She tells the other legislators, “now you have met a Muslim that cares about her community and her country. So when you make decisions that impact people of my faith, think of me, not the TV stereotypes.”

“Do not wait for permission,” she advised Muslim women interested in getting into politics. Her own father told her, “No one is going to vote for an Arab,” while her mother asked if running for office meant she wasn’t having another baby. Yet, through an aggressive door-to-door campaign and by addressing general community concerns such as environmental pollution and stopping scrap metal thieves, Tlaib was elected by a constituency where Arabs are only 2% of the population.

The questions from the audience revealed a hunger to understand how these Muslim women do it.

“My family keeps me grounded,” Tlaib explained. “When I go home I’m not a legislator, I’m a Muslim and Philistina, rooted in my culture and my faith … I always remember the verse from the Quran, ‘With hardship comes ease.’”

Tlaib told TMO that she gained her strength from growing up in Southwest Detroit. Primarily Latino and African American, this inner city community is known for pushing barriers away and making succeeding no matter what. When they fail, they get up and fight again. She said the spirit of Detroiters is “invincible.” She told TMO that if America ever had to fight a ground war, the people of Detroit would be on the front line.

Tlaib said being the eldest child in her family “presented challenges that gave me the strength and courage to represent my district. This urge to fight for the weak, the disadvantaged comes from those experiences I lived through,” Tlaib told TMO. 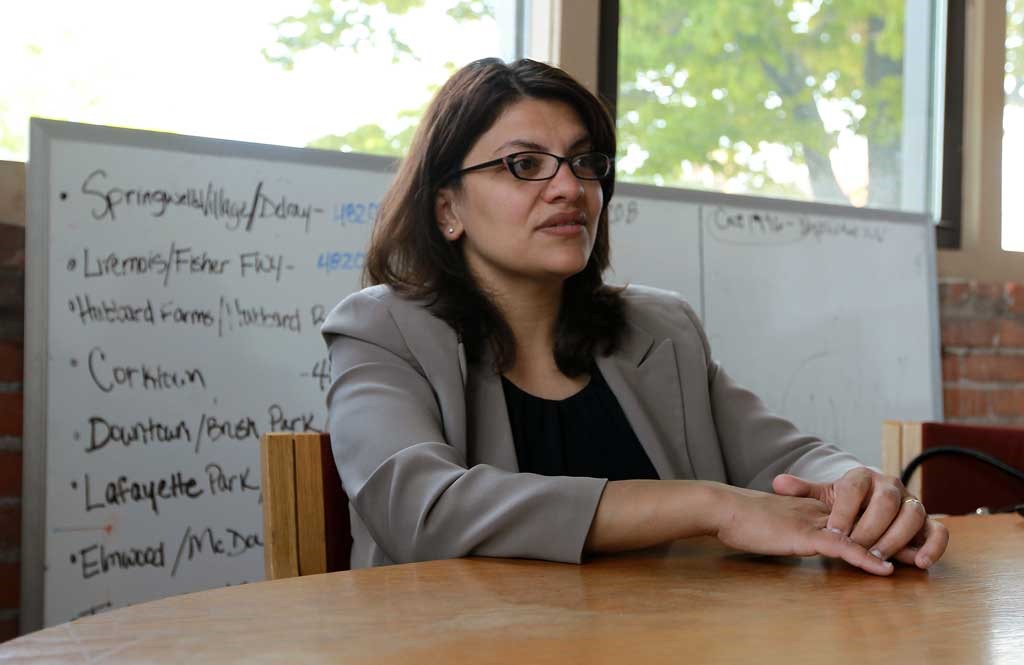 Stealing the Arab Spring
By Aijaz Zaka Syed Well, it was too good to last, I guess. The dream of a democratic Middle East…