Displaced female demonstrators from the minority Yazidi sect gather during a protest outside the headquarters of the U.N. Mission in Iraq, August 2. Azad Lashkari / Reuters.

A multifaith group of religious freedom advocates this week called on President Obama and U.N. Secretary General Ban Ki-moon to declare “that the Islamic State’s actions against religious and ethnic minority populations in the Middle East is genocide.”

Declaring ISIS’ actions genocide could open new doors to military, diplomatic and humanitarian intervention by the international community, intergovernmental organizations and individual countries. But it won’t be easy.

Despite a growing chorus of experts and advocates who believe that ISIS’ atrocities against Yazidis, Christians, Shia Muslims and other religious and ethnic groups amount to crimes against humanity and genocide, U.S. and U.N. officials appear reluctant to explicitly label the group’s actions as such.

President Obama has accused ISIS of having  “threatened genocide,” and U.N. human rights investigators have said many violations and abuses perpetrated by ISIS “may amount to war crimes, crimes against humanity and possibly genocide.”

The most striking case experts cite is ISIS’ actions against the Yazidis (also called Yezidis and Ezidis), adherents of an ancient religion linked to Zoroastrianism. In August 2014, as many as 200,000 people, mostly Yazidis, were forced to flee their homes after ISIS seized large areas of northern Iraq.

“Only a judicial body with an appropriate mandate can make a legal determination” of genocide, said Adama Dieng, U.N. special adviser on the prevention of genocide, in a statement. But “the international community cannot afford to wait until such a determination is made. We must take action to protect populations earlier, before situations deteriorate to the point where the window of opportunity closes and the options for action are fewer and more costly.”

Some critics say the U.S. and U.N. have been reluctant to explicitly label ISIS’ actions “genocide” because doing so would require greater action on their part to stop it.

“Declaring ISIS guilty of genocide raises the stakes for a world community where many actors, especially in the Middle East, have failed to do what will be required to defeat ISIS,” said Charles Haynes, director of the Religious Freedom Center at the Newseum Institute. “If ISIS is committing genocide — and clearly it is — then all nations have a moral obligation to act immediately to stop these crimes against humanity.”

Elisa von Joeden-Forgey, a Holocaust and genocide studies expert at Stockton University, sees a different problem. “Naming something ‘genocide’ will always be controversial, and there is no incentive to do so if it is not clear what steps should be taken to address it,” she said.

The International Criminal Court, which is responsible for prosecuting genocide, defines it in accordance with the 1948 Convention on the Prevention and Punishment of the Crime of Genocide. In April, ICC prosecutor Fatou Bensouda said her court lacks territorial jurisdiction over crimes committed in Iraq and Syria because both states are not party to the ICC’s founding treaty. That punts responsibility to the U.N. Security Council, which would need to refer both countries to the ICC before full investigations could begin. The U.S. Commission on International Religious Freedom recommended in April that the U.S. set this process in motion.

The call is being echoed by a diverse range of religious and human rights groups in the U.S. and abroad.

“Despite the complicated geopolitical situation in the region, the U.S. and the U.N. must take immediate steps to label this ongoing tragedy as a genocide and act accordingly in order to halt any further loss of innocent lives and stop the spread of ISIS’ hateful and draconian ideology,” said Samir Kalra, senior director and human rights fellow at the Hindu American Foundation.

“Defining violence as ‘genocide’ is a political move — it isn’t an objective fact of the situation. It involves a political judgment that some victims are deserving of special protection, and it serves particular interests,” she said. “The real political challenge facing the international community today is ending violence against all civilians of the region, regardless of religion or ethnicity.” 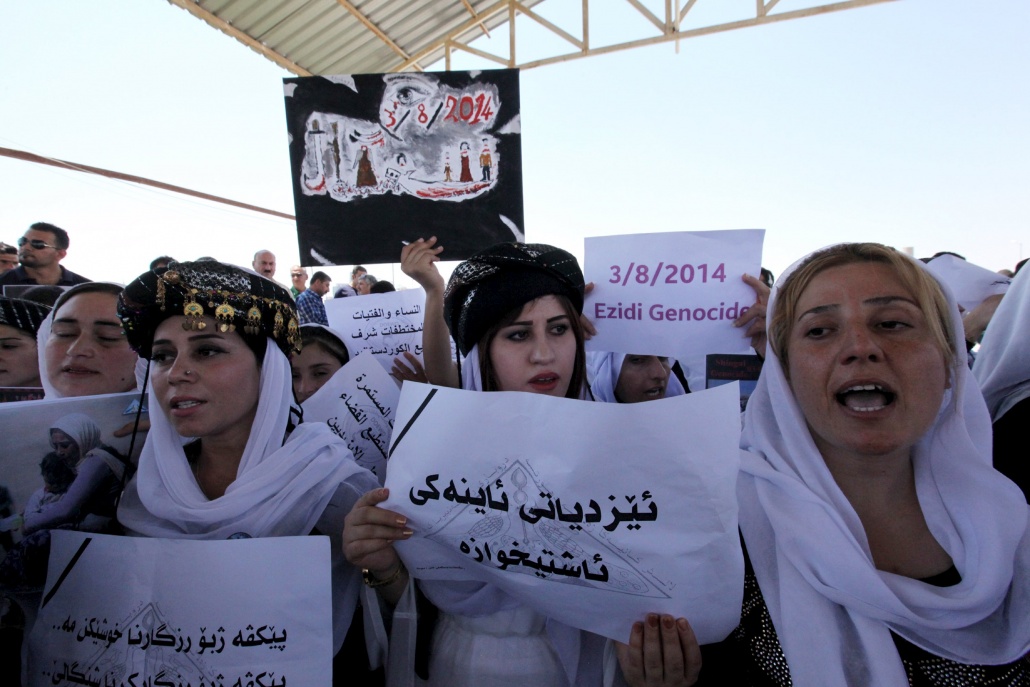 US Economy Is A House Of Cards