VATICAN CITY – Pope Francis will bestow sainthood on two Palestinian nuns on Sunday (May 17), a move that’s being seen as giving hope to the conflict-wracked Middle East and shining the spotlight on the plight of Christians in the region.

Sisters Maria Baouardy and Mary Alphonsine Danil Ghattas are due to be canonized by the pontiff along with two other 19th-century nuns, Sister Jeanne Emilie de Villeneuve, from France, and Italian Sister Maria Cristina dell’Immacolata.

The coming canonizations have been described by the Latin patriarch of Jerusalem, Fouad Twal, as a “sign of hope” for the region.

“The canonization of these two Palestinian saints is a spiritual highpoint for the inhabitants of the Holy Land,” he told Vatican Insider.

“The fact that Mariam (Maria) and Marie (Mary) Alphonsine, the first modern Palestinian saints, are both Arabs is a sign of hope for Palestine, for the entire Holy Land and the Middle East: holiness is always possible, even in a war-torn region. May a generation of saints follow them!”

Twal will travel to the Vatican for the canonizations and has invited Palestinian President Mahmoud Abbas to the ceremony.

Palestinians have waited more than 30 years for the sainthood of Baouardy, following her beatification by St.  John Paul II in 1983.

Born into the Melchite Greek Catholic Church in 1846, in a village near Nazareth, Baouardy went on to join the Carmel of Pau in France. Despite being illiterate, she was sent to India where she founded other convents, before moving to Bethlehem where she died in 1878.

Announcing the canonization in February, the Vatican said Baouardy “experienced many sufferings together with extraordinary mystic phenomena” from an early age.

Ghattas, who was beatified by Pope Benedict XVI in 2009, lived a distinctly less international life. Born in Jerusalem in 1843, she entered the Congregation of the Sisters of St. Joseph of the Apparition at the age of 15. She went on to found the Congregation of Sisters of the Most Holy Rosary of Jerusalem and “worked tirelessly to help young people and Christian mothers,” the Vatican said.

The canonization of the two nuns will inevitably draw attention to Palestine and the Middle East, a region that Francis has repeatedly highlighted in recent months.

In his Easter address, the pope said: “We pray for peace for all the peoples of the Holy Land. May the culture of encounter grow between Israelis and Palestinians and the peace process be resumed, in order to end years of suffering and division.”

He additionally called for an end to “the roar of arms” in Syria and Iraq, while also pushing for a stop to “barbarous acts of violence” in Libya and peace in Yemen.

Twal had no doubt that the approaching sainthoods would have a positive impact on the entire region.

“I am sure that it will rekindle the hope of our faithful in the Middle East and encourage them to remain firm in the faith and keep their eyes fixed on heaven,” he said, “especially in these difficult times that Christians are experiencing there.” 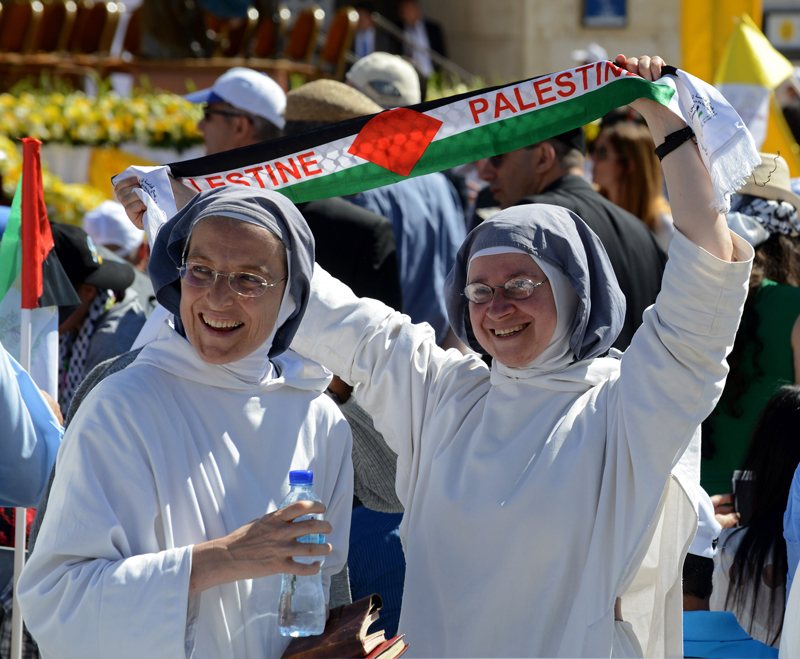 Abidal Back in the Hospital