To her supporters, Kim Davis is a hero. The Kentucky bureaucrat’s willingness to go to jail rather than issue same-sex marriages in violation of her deeply held beliefs even makes her a modern-day martyr. But to her many detractors, she’s nothing more than a bigot.

What if they’re both right?

Real religious freedom, we might want to argue, is found in recent Supreme Court rulings: In favor of a Muslim inmate’s right to grow a beard, as he believed his religion instructed him, say, or a young woman’s right to wear a headscarf while working at Abercrombie & Fitch. If you look closer, however, you’ll see that what the Supreme Court was defending in both these instances was discriminatory behavior.

Not in the sense of causing harm and injustice to others, but in setting people apart. And that’s what gets to the heart of the matter. The problem isn’t Kim Davis. It’s religion.

Religions have united humanity in ways few other ideas have. Today, nearly fifty percent of the world, after all, belongs to one of two faiths. Within a few decades, nearly two-thirds will be. But religions don’t just unite. While I won’t go as far as to call many religious practices bigoted, I’ll certainly say they’re discriminatory. Intentionally.

Sometimes they do this on purpose. The Prophet Muhammad urged Muslim women to cover, and Muslim men to grow out their hair, in part to set them apart from people of other faiths. These practices might seem less threatening than Davis’ decision, because hers has a consequence that meets what we ordinarily intend by “discriminatory”: They cause harm. But they are religious beliefs all the same.

I live in an orthodox Jewish neighborhood, and near a Pakistani Muslim neighborhood. (The primary factor in my decision to live here was another kind of discrimination: Economic.) These two communities have very much in common: They worship a single God, of whom there shall be no form or representation. Women are encouraged to dress modestly, and cover their hair. Men are encouraged to dress modestly, cover their heads and grow out their beards.

They look, pray and act in remarkably similar ways. Put a very orthodox Jewish man in a shalwar qamiz and he’d probably be stopped at the airport. And yet these communities don’t mix. (Trust me: They don’t.)

For several reasons, but perhaps this above all: Marriage. The same beliefs that impelled Kim Davis impels this voluntary segregation. For most Muslims, marriage outside the community is taboo. It’s not necessarily against Shari’ah, but many Muslims have confused cultural practices for religious commandments. In learning with Jewish scholars, I’ve understood that intermarriage is deeply contentious, perhaps even more so than among Muslims. When your numbers are small, demographics taken on greater significance.

And that’s the problem with Davis’ decision. Davis argued she’s only seeking what God asks of her. But people believe God asks them to do different, even incompatible, things. Conservative Christians and Jews join Muslims in proscribing same-sex relationships, and encourage very similar models of marriage. But these social conservatives might be horrified if their own children married into each other’s faiths. Some interpretations of Islam forbid marriage to people outside Islam, while others only permit Muslim men to marry outside the faith, and then only to Christians or Jews. What happens if another Kim Davis comes along, except she’s Muslim, and she says, “My religion forbids me to issue marriage licenses to a Hindu man who intends to marry a Muslim woman”? A kind of chaos could ensue.

The fact of the matter is, we’ll have to live with these clashes between beliefs. More of them, in fact, because our societies are becoming more pluralistic. Not (just) because different religions are growing themselves inside America, and more comfortable and welcome to express their difference, but also because more and more people are happy without religion, and transform many institutions in the course of their lives.

One of my academic advisors, Professor Sudipta Kaviraj, once pointed out to me that secularism wasn’t born in secular societies. There would’ve been no need for it. Secularism emerged in response to societies with passionate and competing beliefs; it was precisely because Protestants and Catholics believed so strongly, and their beliefs were so (mutually) discriminatory, that neutrality was not just conceived of, but required. There’s a reason the Founding Fathers made religion the concern of the First Amendment. They knew what forces it contained and unleashed.

Kim Davis has the right to discriminate. But the state doesn’t. In case she hasn’t noticed, she’s not the state. 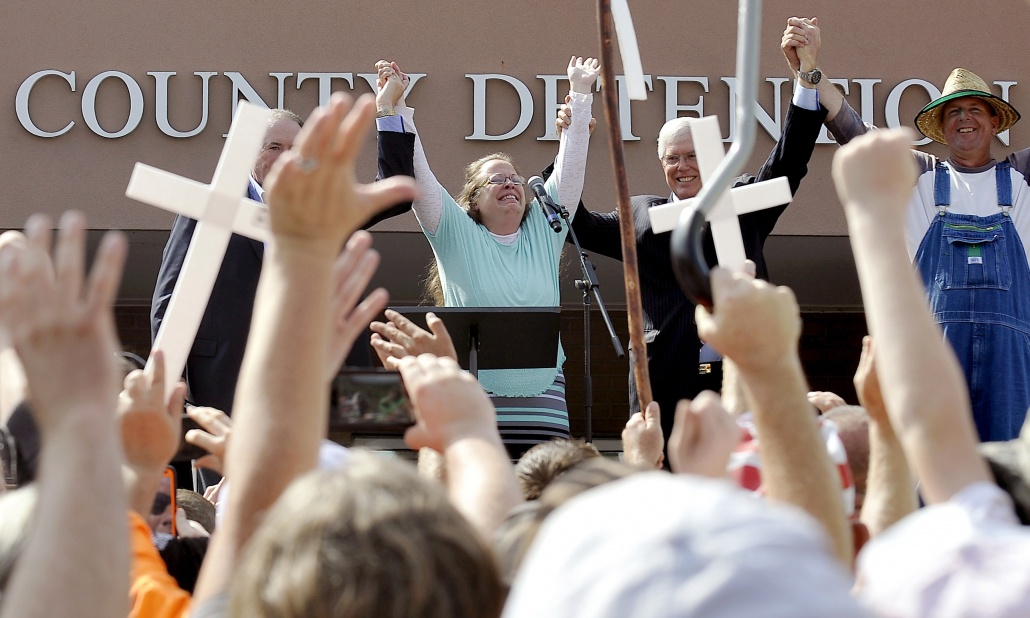