This interview was a TMO staff exclusive.

Vice President Joe Biden’s Presidential campaign has appointed Farooq Mitha as senior advisor on Muslim American engagement. Farooq has been a long-standing supporter of the campaign, helping in many areas including Muslim engagement and in this role he will expand these efforts by reaching out to Muslim communities across the country, engaging them on issues that are important to our communities and helping organize Muslims to support Biden’s campaign. Farooq has deep ties to our communities nationally and has a long track record of working with our communities, supporting political campaigns and serving in government under the Obama administration. Raised in Florida, he is an attorney and a former Fulbright Fellow in the middle east who has been an avid community advocate.While Farooq is engaged with team Biden in his individual capacity, he has a long history of lifting the Muslim community’s civic engagement voice as a co-founder of Emgage, a leading civic engagement organization. He was also a co-founder of the Florida Muslim Chamber of Commerce. The Biden campaign gave the Muslim Observer an exclusive opportunity to be the first to speak to Farooq about his role and Vice President Biden’s engagement of Muslim Americans before Michigan’s March 10th primary. Below is a synopsis of our conversation with Farooq.

TMO: What has been VP Biden’s history of engagement with the Muslim community?

Farooq: VP Biden has a long track record of engaging Muslim Americans and Muslim communities abroad. He has visited beautiful mosques around the world, spoken with imams, participated in Iftars, and learned from Muslim community leaders throughout his career in public service. As a United States Senator and VP, Biden spoke at the Islamic Society of Delaware in Wilmington and as Vice President, he was proud to represent our country abroad and lead visits to culturally and historically important Islamic religious sites. As a candidate for President, VP Biden has directly engaged Muslims in Michigan by visiting a Muslim-owned small business in Dearborn, MI and meeting with community leaders to discuss important issues to the community. He also met with Muslim and Asian American leaders in Los Angeles and Nevada. The campaign has also engaged Muslim communities in Iowa at satellite caucus locations, which for the first time were in mosques, through hosting house parties with surrogates in early states and sending senior surrogates to Islamic centers to engage community members during Friday prayers in states like Virginia. Finally, the campaign has hosted several conference calls with Muslim community members with policy advisors on a range of domestic and foreign policy issues.

TMO: VP Biden has seen a lot of tragedy in his life end and has demonstrated a lot of sacrifice. What do you think drives him?  Why does he keep him going, after accomplishing so much over his lifetime?

Farooq: When VP Biden announced his candidacy for President, he specifically referenced the violent protests of white nationalists in Charlottesville, VA as a fundamental reason he decided to run. He has been very clear that restoring the soul of our nation is an issue that drives him and that another four years of a Trump Presidency would fundamentally alter our nation’s character. This is especially true when you think about this administration’s Muslim Ban, which violates the fundamental values of our nation as a pluralistic society where immigrants historically have found refuge and a nation where anyone regardless of their faith, culture or ethnicity can achieve their personal aspirations. VP Biden has committed to immediately repealing this ban because he understands that Muslim Americans are essential to the American fabric.

TMO: Does VP Biden appreciate that there is significant diversity among the Muslim community and is he committed to reflecting that diversity in his administration should he become President?

TMO: Given the overwhelming support for Senator Sanders in the Muslim community, do you think their turnout can be counted upon for VP Biden in the chance that he is the winner of the primaries?

Farooq: Yes. First, I think the Sanders campaign should be commended for their engagement of the Muslim community. All the efforts from all campaigns to engage Muslim Americans to show the importance of this community to our country and the increasing civic and political capacity our communities have built over the last two decades. I also think that our communities are as determined as ever to defeat Donald Trump and will turnout for the Democratic nominee in November. This should not be taken for granted, though, and the Biden campaign will continue actively engaging our communities in the remaining primary states and in the general election if he is the nominee. This election is too important and all of us recognize that every vote counts.

TMO: A majority of the African-American community has come out in support of VP Biden across the country. Do you think African American Muslims share a similar viewpoint? What is the root of the support he receives in your opinion?

TMO: VP Biden is firmly entrenched and part of the establishment, a good portion of his donors come from large PACs and Wall Street donors. Can Americans in general and Muslims expect any real change?

Farooq: First I want to dispel the notion that VP Biden’s support is from PACs and Wall Street donors. Our campaign does not take money from PACs or lobbyists and is privileged to have support from across every demographic that makes up this nation. In fact, the campaign’s average contribution is less than $50 and as the campaign has grown, we have seen a significant increase in small online donations, including tens of thousands of new, grassroots donors in the last week. I believe that Muslims can expect real change. VP Biden has a very progressive policy agenda of things that he can actually get done and pay for. VP Biden has very detailed plans on expanding Obamacare, tackling climate change, criminal justice reform, immigration and creating opportunities for minority-owned businesses. His experience and relationships put him in a position to get to work on day one and execute on his plans that will change the lives of all Americans including Muslim Americans. Part of my outreach will be to meet with community leaders, engage them on these issues that impact our communities on a daily basis and to ensure Muslim communities are part of this change.

TMO: The voter turnout in the primaries has been mediocre and younger voters do not seem to be getting involved. Voter dissatisfaction was a big reason many people did not come out during the 2016 elections or simply voted for Trump. How is VP Biden different than Secretary Clinton and do you think people will come out to vote for him in a general election?

Farooq: I don’t really want to comment on Secretary Clinton, but I do want to talk about VP Biden’s campaign. First, we’ve seen significant increases in turnout in several states, including my neighboring state of Virginia. Additionally, VP Biden has a strong track record of support from working-class families from across the country. I think that when you look at his performance on Super Tuesday you see a broad, diverse coalition that includes young people that supported his candidacy. The campaign is committed to continuing to engage younger voters on issues that matter to them such as student debt and making college more affordable. Many may not know this, but one of VP Biden’s most important proposals on this front is making community college free to expand access to education. The campaign is also committed to working hard to earn votes in states that we did not win in 2016 like Michigan, Pennsylvania, Wisconsin, Ohio and Florida. Additionally, I think it’s equally important we run a candidate who can help Democrats win down-ticket so we can maintain a majority in the House and try to win back the Senate. VP Biden is the only candidate who has the appeal required to do this.

TMO: There has been significant concern over VP Biden’s position on what is currently happening in India in Kashmir and Indian Muslims broadly. There is also concern about individuals on his staff who may not share our views. What can you share about his policy position on these issues?

Farooq: VP Biden is very concerned about the erosion of democratic principles and human rights at home and abroad. He strongly believes that human rights are at the core of the very idea of America, and the United States is safer when fundamental rights are protected worldwide. During his first year in office, he will convene a summit of the world’s democracies, to renew the shared purpose of our allies and partners to protect democracy and human rights at home and abroad and to support civil society organizations from around the globe who stand on the front lines of the growing threats to human rights. Specifically, in India, VP Biden is disappointed by the measures that Prime Minister Modi’s BJP government has taken with the implementation and aftermath of the National Register of Citizens in Assam and the passage of the Citizenship Amendment Act into law. He supports the rights of the Indian people to protest and believes that these measures are inconsistent with the country’s long tradition of

secularism and sustaining a multi-ethnic and multi-religious democracy. He is also disappointed with measures that the Indian government has taken in recent months in Kashmir and believes it is important to restore peace, full access to communications, and the rule of law for the people of Kashmir.

TMO: What else can you tell us about VP Biden’s other foreign policy positions when it relates to issues across the Muslim world.

Farooq: It’s no secret that currently there are many issues across the Muslim world. Philosophically, VP Biden is committed to restoring American leadership throughout the world, which is sorely missing and standing up for human rights and democracy with the understanding that we do not have all the answers and cannot dictate the outcomes in complex societies. But he strongly believes that as the world’s leading democracy, we have a responsibility to defend and advance liberty and human rights around the world. And what we say and do matters. The VP has been very outspoken about the atrocities against the crimes against the Rohingya and the Muslim Uyghurs in China with detailed plans on how his administration can address these issues. Additionally, VP Biden has committed to re-entering the Iran nuclear deal (provided Iran returns to compliance), which he helped deliver in the Obama-Biden administration, ending the war in Yemen and to engage the Israelis and Palestinians to achieve a two-state solution. I am looking forward to engaging Muslim communities and creating opportunities to uplift their voices on these issues to the campaign.

TMO: What makes you the best candidate for this role and what is the campaign’s strategy moving forward to reach out to Muslim communities in battleground states?

Farooq: I have a long track record of working within Muslim American communities, particularly on civic and political engagement. I come from this community and have humbly served it throughout my career. I hope that this history along with the relationships I have developed with community leaders across the country allows me to effectively reach out with the credibility that I have the best interests of our communities in mind. As this campaign moves forward, it will be critical to engage, organize and mobilize our communities to turn out in the remaining primaries and in November. I am committed to doing that and to help ensure that our communities have a voice and are working hand in glove with the campaign. 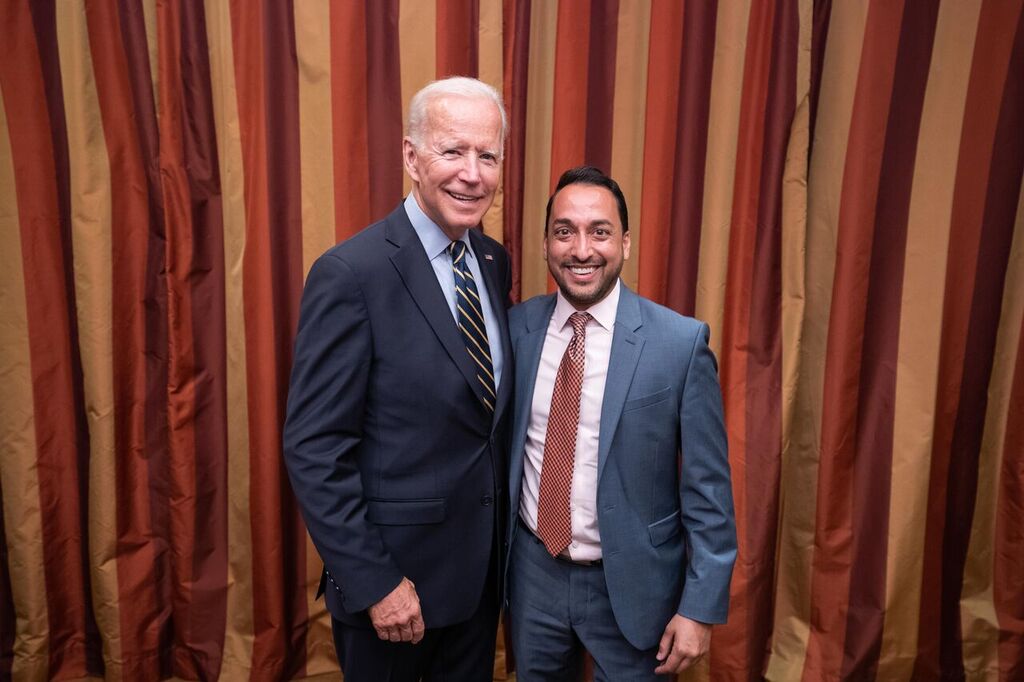 The Last Argument of Fools–How America Has Changed Iraq

With Warren Dropping Out, Bernie Remains the Obvious choice for Muslim Vote...
Scroll to top