The biggest controversy of the past year related to Islam is the â€œPark 51â€ project sponsored by Imam Feisal Abdul Rauf.  This controversy likely stole the thunder of the ISNA diversity forum.

To many it was no surprise that the Park 51 project, a mosque and Muslim community center originally titled the Cordoba House, located only about two blocks from the site struck during the September 11th attacks, inspired a sustained attack on Muslims throughout the United States and in fact the Western world, becoming a lightning rod for the hatred of everyone looking for opportunities to vilify Muslims.

September 11th and the ensuing wars had already mobilized a cadre of paid full-time anti-Muslim zealots who turned excited, en masse, with bloodlust, at the new opportunity given them by Park 51.
What is a surprise, however, is how banal is the imam who started the great big controversy.  Keynote speakers are in fact event anchors–the more exciting the figure the more people and attention can be attracted to an event.

And Imam Abdur Rauf did not disappoint.  Reporters roamed like sharks at a bloodbath.  In my six years of attending Muslim events never have I seen more live press coverage of a Muslim event–several Detroit television channels were present, and even foreign television channels called our office in advance to get a read on the political climate among Muslims surrounding the Park 51 project.  At the event I sat with an entire bank of reporters against a wall to hear Imam Abdur Raufâ€™s speech and report on it.

The theme of the imamâ€™s speech seemed to be, to paraphrase, that â€œI am a child of diversity, and in order to fit into the world I had to experience many cultures–the way forward is for others to embrace other cultures as I have.â€  The imam also argued that what is necessary is for there to be an American Islam, distinct from the Islam of other nations, so that Americans do not think of Muslims as a separate group but as a subset of Americans.  In support of this argument the imam cited English Anglicans, Greek Orthodox, and Muslim groups in other parts of the world–pointing out that their religious identity is not distinct from their ethnic identity.

What was somewhat surprising about the imamâ€™s speech was that he is a soft spoken man whose speech did not seem to fully grasp the socio-political ripples that have gone out from the planned Park 51 project.  He did not speak about whether Park 51 was a good idea, he gave no argument in its defense and did not acknowledge the vicious antagonism the project has excited.  The majority of his speech was a description of his own biography, which raises the question of whether in his mind there is a disconnect between what he has done and the reaction.

Other than Imam Abdur Raufâ€™s speech, the ISNA Diversity Forum was significant mainly because of its representing ISNAâ€™s first attempt to branch into the Detroit area.  ISNA, although it is based in Plainfield Indiana, overwhelmingly chooses to base its annual conventions in Chicago, and this is why the movement towards Detroit is significant.

ISNA called its first movement towards Detroit a â€œdiversity forumâ€ because of its recognition that Detroit relative to Indiana or Chicago has a much higher representation of Shiâ€™a Muslims, and ISNA also apparently believes there is a higher proportion of African American mosques as well.

The convention featured many interesting speakers, for example Aisha AlAdawiya and Zaid Shakir, an â€œart exhibitâ€ with work produced by non-Muslims, the banquet, and a lively bazaar.

The banquet speech by Imam Abdur Rauf was sold out, but the rest of the convention had been attended in total by about 500 people, in part because of the relative isolation of the Doubletree in which it was held, and because the conference was only held for two days instead of three.  This conference was not bad for a first foray into the Detroit area by the major US national Muslim organization, not to be compared with their Chicago conventions which likely host 15,000 people instead of the 500 who came to Dearborn.

Said Nauman Syed, who volunteered at the Diversity Forum and helped organize the event, â€œwe are pretty happy with the attendance–the banquet is sold out and we had a good mix of different communities.â€  He acknowledged that ISNA had learned lessons from this event which would affect the planning of future events, and he explained that the speech of the imam had actually been almost an afterthought–the event was not for him, he said, the imam agreed to speak â€œin the last couple of weeks.â€ 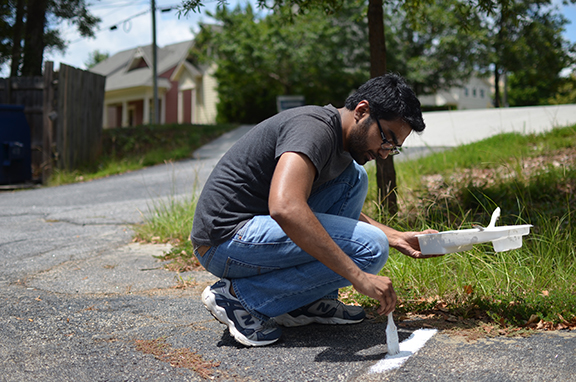